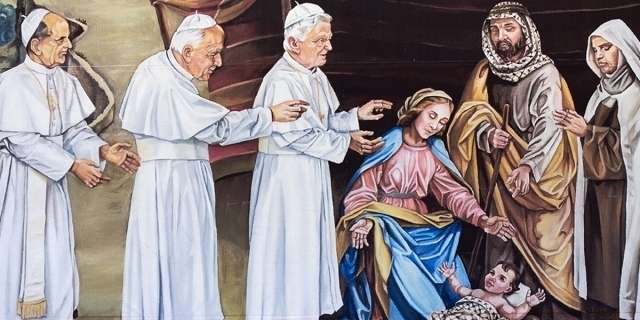 This tradition is anything but mere decoration.

Pope Francis loves the Christmas Nativity scenes so much that last year he wrote a whole letter on this tradition, which traces back to his namesake, St. Francis. Pope Benedict XVI as well often pointed out the value of this beautiful tradition.

As you’re standing before your own family Christmas crib this year, enjoy these 10 reflections from the pontiffs about the creche.

The Crib helps us contemplate the mystery of God’s love that was revealed in the poverty and simplicity of the Bethlehem Grotto. – Benedict XVI, 11 December 2005

“Life was made manifest” (1 Jn 1:2). In these words, the Apostle John sums up the mystery of the Incarnation. The crèche allows us to see and touch this unique and unparalleled event that changed the course of history, so that time would thereafter be reckoned either before or after the birth of Christ. – Francis, 1 December 2019

Setting up the Christmas crèche in our homes helps us to relive the history of what took place in Bethlehem. Naturally, the Gospels remain our source for understanding and reflecting on that event. At the same time, its portrayal in the crèche helps us to imagine the scene. It touches our hearts and makes us enter into salvation history as contemporaries of an event that is living and real in a broad gamut of historical and cultural contexts. – Francis, 1 December 2019

The origin of the Christmas crèche is found above all in certain details of Jesus’ birth in Bethlehem, as related in the Gospels. The evangelist Luke says simply that Mary “gave birth to her firstborn son and wrapped him in swaddling cloths, and laid him in a manger, because there was no place for them in the inn” (2:7). – Francis, 1 December 2019

The Nativity scene is like a living Gospel rising up from the pages of sacred Scripture. As we contemplate the Christmas story, we are invited to set out on a spiritual journey, drawn by the humility of the God who became man in order to encounter every man and woman. We come to realize that so great is his love for us that he became one of us, so that we in turn might become one with him. – Francis, 1 December 2019

Putting up the Crib at home can be a simple but effective way of presenting faith, to pass it on to one’s children. – Benedict XVI, 11 December 2005

The Christmas crèche is part of the precious yet demanding process of passing on the faith. Beginning in childhood, and at every stage of our lives, it teaches us to contemplate Jesus, to experience God’s love for us, to feel and believe that God is with us and that we are with him, his children, brothers and sisters all, thanks to that Child who is the Son of God and the Son of the Virgin Mary. – Francis, 1 December 2019

Why does the Christmas crèche arouse such wonder and move us so deeply? First, because it shows God’s tender love: the Creator of the universe lowered himself to take up our littleness. The gift of life, in all its mystery, becomes all the more wondrous as we realize that the Son of Mary is the source and sustenance of all life. In Jesus, the Father has given us a brother who comes to seek us out whenever we are confused or lost, a loyal friend ever at our side. He gave us his Son who forgives us and frees us from our sins. – Francis, 1 December 2019

Wherever it is, and whatever form it takes, the Christmas crèche speaks to us of the love of God, the God who became a child in order to make us know how close he is to every man, woman and child, regardless of their condition. – Francis, 1 December 2019

The Crib can help us understand the secret of the true Christmas because it speaks of the humility and merciful goodness of Christ, who “though he was rich he made himself poor” for us (II Cor 8: 9). – Benedict XVI, 11 December 2005