Advertisement
Although the Fatima apparitions happened 100 years ago, the Vatican’s resident Fatima-expert, has said they contain a message that’s both relevant and needed in the world today.
“The apparitions of Fatima are a historical event with an extraordinary significance, and they have a meaning that’s not only religious, but also socio-political,” Cardinal Jose Saraiva Martins told CNA in an interview.
What Our Lady offered during her apparitions is a message “that deals with mankind as mankind, not only Christians or believers,” and because of this, it “has an extraordinary authority” in the world today.
Prefect Emeritus of the Congregation for the Causes of Saints, Cardinal Martins is himself from Portugal, and has written extensively on the apparitions.
On May 13, 1917, the Virgin Mary appeared to three shepherd children – Lucia, Francisco, and Jacinta – in a field while they were tending their family’s sheep.
In her message to the children, Mary brought with her requests for conversion, prayer (particularly the recitation of the rosary), sacrifices on behalf of sinners, and a three-part secret regarding the fate of the world.
Although there are many different elements to the requests made by Our Lady, Cardinal Martins said her appeals can be summed up in four key themes.
“I always say there are four key chapters, four points of extreme authority,” he said. “So what are these four points?”
Faith
“The first point, the first appeal of the Madonna, is an appeal to faith,” Cardinal Martins said.

Her appeal in this regard “is very current because, unfortunately, we live in a world in which the faith is falling. Unbelief is growing, and the Catholic faith, the faith of the Gospels, is increasingly decreasing.”
“We are walking toward a pagan world,” the cardinal continued, explaining that in many ways man no longer believes in the Gospel. People have an “abstract faith,” he said, but the Gospel is not a part of their concrete lives.
Thus Mary’s call to faith, even after 100 years, “has an extraordinary authority,” he said.
“Man today needs faith, to believe in something; to believe in God, who is our common father, to believe in our brothers, we are all children of the same Father, we are all brothers.”
Understanding the link between these two aspects is fundamental for the world today, not just for Christians, but for all mankind, he said, adding that man needs to recognize that “one’s origin is from God, it is not autonomous.”
“There is no world war, (but) there are small wars, as the Pope says, and they are worse than a world war, because a world war has a beginning and an end and then it finishes.”
“These small wars, on the other hand, are worse than the world wars because they don’t end.”
Conversion
Cardinal Martins said there is a second key appeal made by Mary “which is very important, and that is conversion.”
“The Madonna spoke many times to the shepherds about the need for man to convert … to increasingly draw nearer to God, and so to always draw nearer to our brothers and sisters,” he said, explaining that “the second appeal depends on the first.”
Throughout her six appearances Mary encouraged them to pray the rosary daily and to offer sacrifices in reparation for sins.
In her third appearance to the shepherds, Mary told them: “Sacrifice yourself for sinners, and say many times, especially whenever you make some sacrifice: O my Jesus, it is for love of Thee, for the conversion of sinners, and in reparation for the sins committed against the Immaculate Heart of Mary.”
Conversion is something still missing from in the world, Cardinal Martins said, noting that in all of her apparitions Mary consistently insisted “on the need for man, especially today, to increasingly draw nearer to his origin, to God.”
Peace
The third “chapter” of Our Lady of Fatima’s message is an appeal for peace, Cardinal Martins said.
Mary spoke to the children about peace often and urged them to pray for peace, he said, noting that her request came as the global armies were embroiled in World War I.

Our Lady’s message was to “do penance, ask for peace, because otherwise man will disappear,” he said, as is evidenced in the vision the children had of hell and the souls who anguishing there.
Perhaps one of the most impressionable aspects of the apparitions, he said, is Mary’s insistence “on the absolute, urgent need to have peace, to fight for peace, to ask God for peace.”
He stressed the need to continue to pray for peace today, because “man today needs many things, but especially peace, with himself and others.”
He referenced the many conflicts raging throughout the world, saying “one of the most painful wounds today is this fighting one with the other; the lack of peace between Muslims and Christians, the inhabitants of this country and the inhabitants of that country, etc.”
Hope
“Many people today lack many things, but lack one above all: hope.”
Hope is the fourth and final chapter of Mary’s message, Cardinal Martins said, explaining that “man today doesn’t have hope, he lives a life without a future, without the hope of a future.”
And if a person doesn’t have hope in the future – whether in his own life or in his relationships with others – “then what life is this?” the cardinal asked, noting that sadly, “it’s a life that many times, unfortunately, many times ends in suicide.”
Pointing to the high suicide rate among teens, he said many youth end up killing themselves “because they live a life that has no meaning for them. They lack hope, they lack a vision for the future.”
Hope, he said, “is fundamental for man,” so it’s natural for those who lose hope to turn to suicide in their despair, because they feel that “there is no sense to my life if it doesn’t have a destination that it must reach.”
So what Mary asks for from the men of today, and “what God demands of men today, (is) a deep faith, a hope, brotherhood among us – which is greatly lacking – so we will have peace, which we need to live a dignified life,” he said.
Cardinal Martins said this synthesis of the message of Fatima is not only relevant for the world today, but “it’s an obligation for the Church.”
The message of Fatima ought to be lived not just individually, but “as a human community,” he said, explaining that the three children were able to respond to Our Lady’s appeals with “an extraordinarily unique, unrepeatable mission.”
Even though they were young children, they were able to communicate and spread Mary’s message to the entire world with their sacrifices and prayers, he said, adding that the centenary of the apparitions, coupled with the canonization of Francisco and Jacinta, “does nothing but underline this importance.” 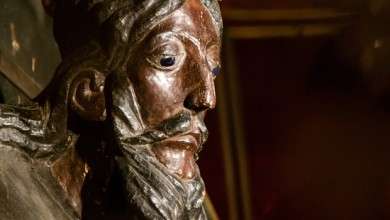