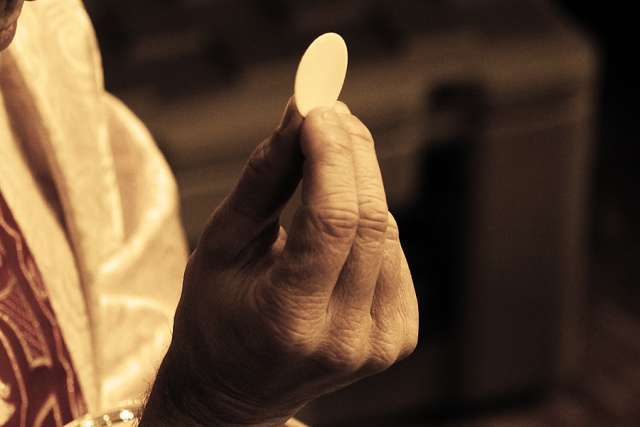 May I Receive Communion Twice in One Day?

Catholic Home » Q&A » May I Receive Communion Twice in One Day?

I am a DRE with the US Army and I was told by a catechist that to attend Mass twice on one weekend was debauchery. I am sure that I have been advised otherwise as I am blessed to be able to attend many services within a week and sometimes twice a day but of course for separate events, such as a funeral or to assist within the Mass and be required to attend more than once a day. Please advise on receiving Holy Communion in such a case.

The Church considers Holy Communion once a day to be the laudable norm for the active laity. Reception more than once in a day is permitted in “special circumstances.”

While canon law does allow for reception of the Blessed Eucharist more than once in a day, the faithful should discern whether, in their particular situation, receiving a second time is spiritually beneficial.

The faithful normally receive Holy Communion within the Eucharistic celebration. Receiving Communion outside of the Mass is in no way comparable to participation in the celebration of the Mass. Canon law promotes reception of the Eucharist within the Mass by providing for reception a second time for those people who find themselves in abnormal situations. For example, if a person has received Holy Communion at Communion service, thinking that Mass is not available, the Church permits him to receive a second time if later he is able to attend Mass. Also, for example, if a person attends Mass, receives Communion, and then later in the day participates in a special Eucharistic celebration, such as a funeral or wedding, he is then permitted to receive a second time.

In short, the faithful may receive more than once in day. Canon 917 reads:

“One who received the blessed Eucharist may receive it again on the same day only within a eucharistic celebration in which that person participates, without prejudice to the provision of Canon 921 [Viaticum or Holy Communion received because of danger of death].”

The “again” in canon 917 is to be interpreted as only one more time on that same day, rather than as often as one receives. The exception is in the case of Viaticum (canon 921.2), when a third Communion is possible. Also, canon law comes from the faith and presumes faithfulness in those whom the law binds. Hence the wording of Canon 917 allows for anyone to receive Holy Communion a second time in one day as long as the second reception is within a Eucharistic celebration (with the exception of Viaticum). While the canon says “may,” each of the faithful must discern whether he should.

The fruits of Holy Communion are such that reception once in a day is generally sufficient. The graces received from the Blessed Sacrament are innumerable. Also, Communion with Christ unites us to Him while cleansing us from past venial sins and preserving us from future mortal sins; and incorporates us more fully in the Body of Christ (cf. Catechism no. 1391-96). Thus, this spiritual food prepares us for greater participation — active or contemplative — in the community of believers. The faithful are prepared to “Go in peace to love and serve the Lord.” To instead attend a second Mass for the sake of a second Communion should be done for well-discerned spiritual reasons and perhaps under the guidance of spiritual director.

On the other hand, a person might not choose to attend a second Mass for the sake of receiving the Eucharist, but instead to serve the faithful attending that Mass, perhaps as an usher, minister or speaker. He might find himself present when Holy Communion is offered. The individual should discern whether his manner of participation has properly disposed himself for receiving. To receive Communion a second time the person should actively assist at the Mass.

Finally, Redemptionis Sacramentum, the most recent liturgical instruction from the CDWDS (March 2004), does not add to our understanding, but simply quotes the canon by way of reminder:

“A lay member of Christ’s faithful ‘who has already received the Most Holy Eucharist may receive it again on the same day only within a Eucharistic Celebration in which he or she is participating, with due regard for the prescriptions of can. 921 § 2’” (no. 95).

“Like a provident mother, the Church has established from centuries-old practice and has received into its canon law a norm according to which it is lawful for the faithful to receive communion only once a day. That norm remains unchanged and is not to be disregarded simply for reasons of devotion. Any ill-advised desire to repeat communion must be countered by the truth that the more devoutly a person approaches the holy table the greater the power of that sacrament which feeds, strengthens, and expresses faith, charity, and the rest of the virtues.[See Summa Theologica 3a, 79.7 ad3; 8 ad 1] For the faithful are to go forth from the liturgical celebration to do works of charity, religion, and the apostolate ‘so that what they have received by faith and sacrament in the celebration of the Eucharist they will hold to by the way they live.’”[Sacred Congregation of Rites, Immensae Caritatis, no. 13]

United in the Faith,