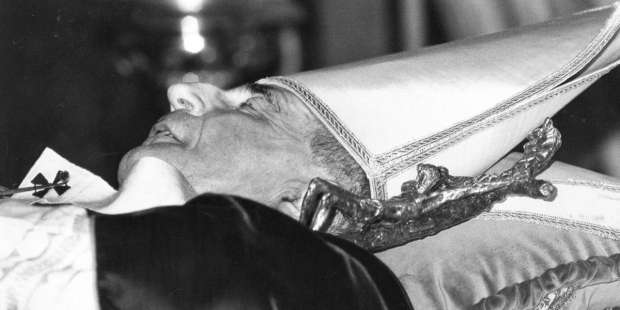 One of the two nuns who discovered the dead body of Pope John Paul I spoke for the first time to the press on the website Vatican Insider on December 11, 2017. Asked about the abrupt end of the shortest pontificate in history, Sister Margherita Marin contradicted conspiracy theories by reporting that the pontiff did not have a pained expression on his face at the time of his death.

The nun, now 76 years old, was 37 at the time of the events. She was the youngest of the four Sisters of the Holy Child Mary who attended to the daily needs of Pope John Paul I during his 33-day pontificate. She was in charge of his wardrobe and ironing.

Sister Margherita reports that on the morning of September 29, 1978, at around 5:30AM, when she discovered the pope’s dead body lying on his bed, “his hands were resting on his chest, as happens to someone who falls asleep reading.”

“The expression on his face was not one of suffering; he was relaxed, with a slight smile. He seemed to be sleeping,” she adds, saying that he must have died “without realizing it.”

According to the nun, the Sovereign Pontiff “was not at all preoccupied” on the day before his death. He “had adapted very well to the new role that had been entrusted to him,” she adds, and “was not at all crushed by the responsibility he had received. He had so much confidence.”

Theories about the pope’s sudden death

Nearly 40 years later, these statements contradict many theories about Pope Luciani’s death. According to some conjectures, the “Smiling Pope” died of distress, crushed under the weight of his responsibility. Others propose that he might even have been poisoned, the victim of a conspiracy organized by members of the Curia.

On November 7, the Italian journalist and vice-postulator of the cause of beatification of John Paul I, Stefania Falasca, published a book titled Papa Luciani, cronaca di una morte (“Pope Luciani: chronical of a death”). This “investigative book” is based on many testimonies, including that of Sister Margherita, who refutes these various theories about the pope’s sudden death.

Two days later, on November 9, Pope Francis recognized the heroic virtues of John Paul I (1978), paving the way for his beatification. The Venetian pope marked his very short pontificate with his perpetual smile and his great simplicity.