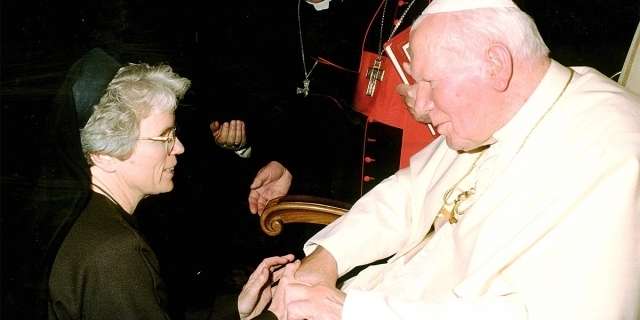 25 years ago, a Franciscan sister installed internet in the Vatican

Home » People and History » 25 years ago, a Franciscan sister installed internet in the Vatican

The American nun was originally charged with “taking care of the computers.”

In the early 1990s, an American Franciscan, Sr. Judith Zoebelein, was entrusted by Pope John Paul II with the daunting task of bringing the Vatican into the digital age. Twenty-five years after the opening of the Vatican’s first web page, the website of the Catholic Church in Germany katholisch.de interviewed this quiet pioneer who changed the history of the world’s smallest state.

In 1991, Sr. Judith arrived at the Vatican to “take care of the computers,” she says, brought in by the new Prefect of the Administration of the Patrimony of the Apostolic See (APSA), Cardinal Rosalio Castillo Lara. Computers were nothing like they are today —especially in Italy—and the cardinal entrusted the American sister with the task of establishing norms to standardize the use of computer equipment in the Vatican.

In 1994, the “internet took off,” especially email. Some Vatican officials began to take an interest, she says. Joaquín Navarro-Valls, the charismatic director of the Holy See’s Press Office, proposed putting the Vatican “online.” The idea was presented to Pope John Paul II, who was “a great visionary,” according to Sr. Zoebelein. The pontiff accepted “immediately,” seeing it as a great opportunity for evangelization. On Christmas Day 1995, the first page of the official Vatican website, vatican.va, went online.

Everything accelerated then, the pages growing “like mushrooms,” each dicastery of the Holy See adding—at the sister’s initiative—its stone to the edifice. Sr. Zoebelein worked almost alone, with the help of a technician in charge of the servers. She was in charge of the content and developed the layout. It is to her that we owe the “parchment” background still used by the Vatican website today. She explains that she chose it to represent “2,000 years of Church history.”

Even the pope is accessible

Sr. Zoebelein explains that she has been particularly concerned to communicate the two essential parts of her work: the technical and the human. However, she encountered some reticence within the Roman Curia, such as one monsignor who told her that the internet “is a gateway for the devil.” Nonetheless, she had the support of the main heads of the Curia, and especially of the Pope, who in 2001 decided to promulgate an apostolic exhortation directly online, Ecclesia in Oceania.

Sr. Zoebelein also set up the email address of the Successor of Peter, which has met with immense success since its launch. When he fell ill with the flu on December 24, 1995, the pontiff saw his mailbox flooded with advice and remedies to help him recover. “The pope had always been a mysterious, untouchable and distant person,” explains the American religious, “then came the internet, and suddenly he became someone who seemed much more accessible.”

In the beginning, the pope received all the emails. However, the number became too large and he was given a selection of them, the others being nevertheless stored on CD-ROM by the archives of the Holy See.

A spirituality of technology

Sr. Zoebelein refuses to demonize the digital world: it “is also part of Creation” through the work of humanity, she insists, certain that “God also has a place in His plan for technology.” Moreover, she would be in favor of Carlo Acutis, recently beatified, being the official patron saint of the internet. This young man, she says, “lived and breathed the internet” all his life, and had a true understanding of the “spirituality of technology.”