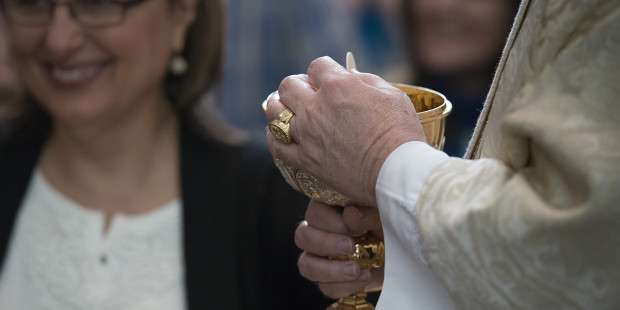 Overtime there are several ways through which many Catholics receive the Eucharist wrongly but below are three major ones that points to it all:

1. Not Bowing Before Receiving the Holy Eucharist

Paying reverence before the receiving the Holy Eucharist is a very important aspect of the Holy Communion. Because we are face-face with Christ at that moment, coming to receive his flesh and blood. So showing respect by bowing, kneeling or making the sign of the Cross are most appropriate and reverencing acts before receiving Him. This can be confirmed in the USCCB’s General Instruction of the Roman Missal.

2. Not Saying “Amen” Before Receiving the Holy Eucharist

The Holy Eucharist reception is meant for just Practicing Catholics who are in a state of grace. Being in a State of Grace before receiving the Holy Communion means being without a mortal sin since your last confession. If you are not in the “State of grace” you need to go for confession before receiving the Holy Eucharist but you can as well attend a Holy Mass.
Receiving the Eucharist in a state of mortal sin is a sacrilege. So don’t do it!.
Not receiving when you are not in the proper state shows your love and respect for Jesus. If you’re in a state of mortal sin, going to Mass but not receiving actually shows you’re heading back on the right track.