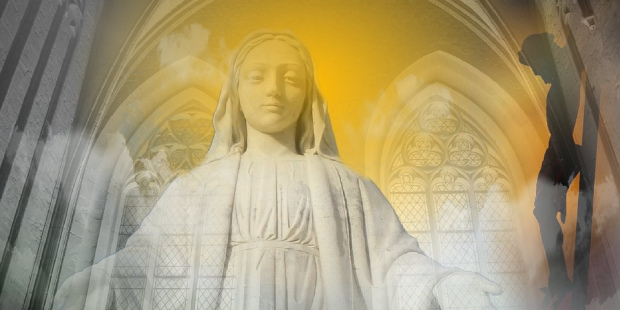 Most people have heard of the “big three” — Mexico City, Lourdes and Fatima — but have you heard of these?

Most Catholics, and non-Catholics for that matter, have heard of the “big three” Marian apparitions. The visions of the Blessed Mother at Tepeyac Hill in Mexico City, Lourdes in France, and Fatima in Portugal are well known and recognized for their importance.

But those aren’t the only times Mary has stopped by to visit this valley of tears. Here are five of her lesser-known visits:

Known as Our Lady of Hope, this apparition was recognized by Pope Pius IX in 1872. On the afternoon of January 17, 1871, during the height of the Franco-Prussian War, two young village boys were helping their father work at the barn when they saw a beautiful woman smiling at them.

When the boys alerted their parents, the adults saw nothing. Similarly, a religious sister from the local school came and saw nothing. However, two young girls were brought over without being told anything about what was happening and instantly saw and perfectly described the same beautiful woman wearing a blue gown covered with golden stars, and a black veil under a golden crown.

As word spread, many from around the village gathered to pray, and the children saw a banner unfurl under the woman with a message that read:
“But pray, my children. God will hear you in time. My Son allows Himself to be touched.”

Upon hearing the message read aloud, the crowd spontaneously began to sing hymns, and as they sang, Our Lady laughed and joined in the singing.

That same evening the Prussian forces inexplicably abandoned their advance.

At about 8 p.m. on the night of August 21, 1879, people ranging in age from 5 to 75 saw an apparition of the Blessed Virgin Mary, St. Joseph, and St. John the Evangelist at the south end of the parish church. Behind the figures there was a plain altar with a cross and a lamb.

Bridget Trench, one of the 15 seeing the apparition, stated that she “went in immediately to kiss, as I thought, the feet of the Blessed Virgin; but I felt nothing in the embrace but the wall, and I wondered why I could not feel with my hands the figures which I had so plainly and so distinctly seen.”

The group stood and prayed the rosary in the pouring rain, and afterward noted the area under the apparition was completely dry.

In 1973, Sister Agnes Katsuko Sasagawa, who had received healing from multiple health problems after drinking water from Lourdes, went to live with a group of religious sisters in the remote area of Yuzawadai, Japan.

Sasagawa, who was completely deaf at this time, reported apparitions, stigmata, and tears streaming from the face of a wooden statue of the Blessed Virgin Mary, claims which were corroborated by other sisters in the community

Sister Agnes reported hearing the Blessed Virgin Mary call to her and offer her messages such as, “Pray very much the prayers of the Rosary. I alone am able still to save you from the calamities which approach,” and “Many men in this world afflict the Lord. I desire souls to console Him to soften the anger of the Heavenly Father. I wish, with my Son, for souls who will repair by their suffering and their poverty for the sinners and ingrates.”

In addition to the messages, the weeping statue was broadcast on TV Tokyo Channel 12.

By June of 1982, Sasagawa, who had been diagnosed as incurably deaf, had her hearing completely restored. In addition, a Korean woman, Teresa Chun Sun Ho, prayed for healing from a brain tumor through the intercession of Our Lady of Akita and received both visions of Our Lady and a complete healing.

The local ordinary, Bishop John Shojiro, authorized “the veneration of the Holy Mother of Akita” in 1984, pending definitive judgment from the Holy See.

Also known as Our Lady of the Poor, this apparition was reported by a girl named Mariette Beco, who told her parish priest she saw a lady in white who declared herself to be the “Virgin of the Poor,” and said, “I come to relieve suffering” and “Believe in me and I will believe in you.”

When Mariette was just 12 years old, she saw a vision of a beautiful lady outside of her kitchen window. The lady asked her to plunge her hands into a small spring, telling her the spring was for healing and “for all nations.” Over time the site drew many pilgrims. Today, the small spring yields about 2,000 gallons of water per day with many reports of miraculous healings.

After the apparitions, Mariette lived a private life. In 2008 she made a final statement about her role in the apparitions: “I was no more than a postman who delivers the mail. Once this has been done, the postman is of no importance any more.” Mariette died in 2011 at age 90.

In May 1942, Bishop Louis-Joseph Kerkhofs approved the veneration of Mary under the title of Our Lady of the Poor. In 1947, approval for the apparitions came from the Holy See.

More to read: The Virgin Mary appeared 8 times to an ordinary girl

In May of 1664, a 17-year-old by the name of Benoite Rencurel saw an apparition of St. Maurice, a 3rd-century martyr locally venerated. In this apparition, St. Maurice told the shepherdess to go to the Valley of Kilns, above Saint-Etienne, where she would see the Mother of God. On May 16, Benoite took her sheep to the small grotto described to her by St. Maurice, and saw the Blessed Virgin Mary holding Jesus in her arms.

For about four months, Our Lady appeared in the same spot every day.

Mary directed Benoite to a nearby chapel, leading her by an overwhelming scent of a beautiful perfume, and told her the chapel would become a place of conversion for sinners and a site of frequent apparitions. She also told Benoite the oil from the sanctuary lamp would work miracles with the infirm if they received the anointing with faith in her intercession.

At the heart of the message given to Benoite is a conversion of souls, which aims to bring full reconciliation with oneself, with others, and with God.

On May 5, 2008, Bishop Jean-Michel de Falco Leandri announced the Holy See’s recognition of the apparitions as Our Lady of Laus, Refuge of Sinners.