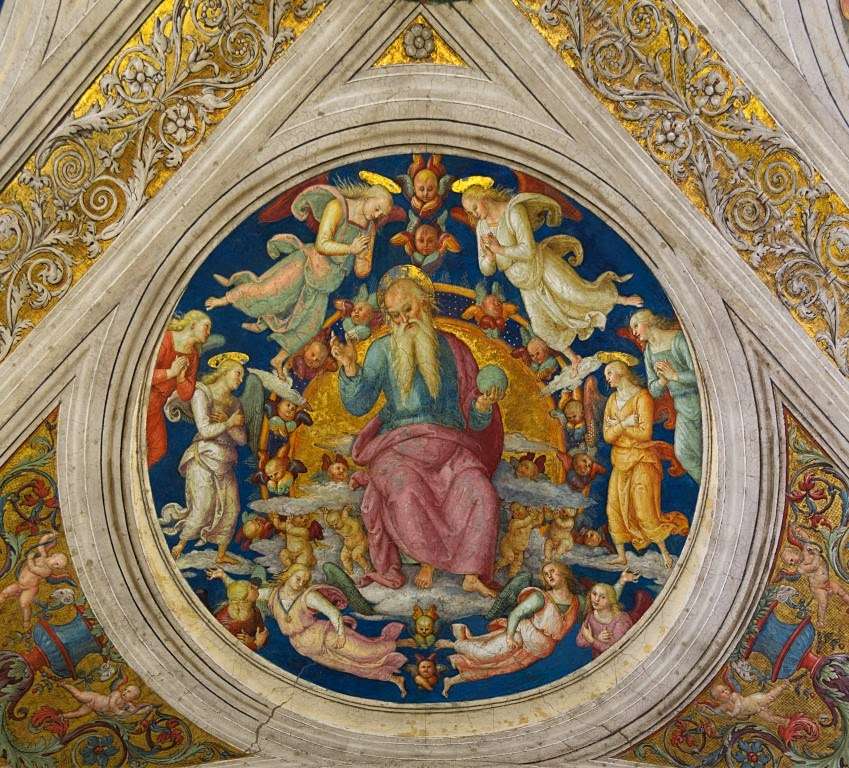 Should you pray to angels? Does the Bible have anything to say about this practice? And if so, does it permit it or condemn it?

I should clarify at the outset that by “praying,” I don’t mean “worshiping” them. All Christians are in agreement that worshiping angels is contrary to Scripture, and Revelation 19:9-10 and 22:8-9 are particularly clear that we are not to do so. That question is easy. Instead, I mean speaking to angels, asking them to pray for us, asking them to protect us, thanking them for their protection and prayers, and the like.

With that in mind, consider these six Biblical reasons to pray to angels. I’m going to present each point with minimal commentary, summarizing the resulting picture at the end:

(1) Your Guardian Angel is Praying For You.

In Matthew 18:10, Jesus says, “See that you do not despise one of these little ones; for I tell you that in heaven their angels always behold the face of my Father who is in heaven.” It’s easy to overlook the importance of that line for this question, but Christ is confirming that we each have guardian angels interceding for us before the Heavenly Throne. That’s why He refers to these as “their angels.” Nor is it just individuals who have guardian angels. Revelation 1:20 tells us that each church also has its own angel. And God uses these angels as intermediaries between God and man: He sends an angel to speak to John and inspire him to write Revelation (Rev. 1:1), and then has this angel transmit a message to John to proclaim to the angels of each of the churches (Rev. 2:1, 8, 12, 18; 3:1, 7, 14). Nations are also entrusted to particular guardian angels, as was done with the nation of Israel (Daniel 10:21; 12:1). So there are angels who have a direct responsibility for us, and who are involved in our lives, praying for us.

(2) Angels Bring the Prayers of the Saints to God.

Not only are angels praying for us, they’re also bringing our prayers to God. In Tobit 12:15, the Archangel Raphael says, “I am Raph′ael, one of the seven holy angels who present the prayers of the saints and enter into the presence of the glory of the Holy One.” Now, Protestants might be hesitant to accept that testimony: after all, it’s from the Book of Tobit, which they believe is non-inspired. But it turns out, the Book of Revelation confirms what Raphael said. Revelation 8:2-4 says:

Then I saw the seven angels who stand before God, and seven trumpets were given to them.  And another angel came and stood at the altar with a golden censer; and he was given much incense to mingle with the prayers of all the saints upon the golden altar before the throne; and the smoke of the incense rose with the prayers of the saints from the hand of the angel before God.

Now, Revelation doesn’t specify whether these are the prayers of the Saints in heaven, on earth, or both. But it’s clear that these seven angels (along with an eighth, who serves as a heavenly thurifer) are offering the prayers of the Saints. So angels aren’t just involved in praying for us, but are intimately involved in our prayers to God. This turns out to be an important point for Protestants, who fear that intercession somehow gets in the way of their ability to pray directly to God. Their prayers directly to God are already going through angelic mediation!

(3) Angels Protect Us in Other Ways, Too.

Angels help us in countless other ways, as well. Hebrews 1:14 says of angels: “Are they not all ministering spirits sent forth to serve, for the sake of those who are to obtain salvation?” This ministry takes different forms, as they provide for our physical and spiritual needs on the road to salvation. For example, Psalm 34:7 says that, “The angel of the Lord encamps around those who fear him, and delivers them.” Sometimes this takes the form of physical protection: for example, in battle (2 Chronicles 32:21). Additionally, it was an angel who gave Elijah food and drink to strengthen him when he had given up on living (1 Kings 19:5-8). But beyond physical protection, angels help us spiritually. When Balaam went to curse Israel, it was an angel who stopped him – invisibly at first, and visibly only thereafter (Numbers 22:32-33).  Other times, this angelic ministry takes the form of telling us what to do. An angel instructed the Apostle Philip to “Rise and go toward the south to the road that goes down from Jerusalem to Gaza” (Acts 8:26) so that Philip would encounter the Ethiopian eunuch reading Isaiah, and lead him to salvation (Acts 8:27-39). Finally, and perhaps most obviously, they announce the will of God to us. Several times throughout Scripture, angels answer our prayers on God’s behalf, or are His instrument for announcing His will or His plans. For example, the prayers of Hagar and Ishmael are answered by an angel (Genesis 16:1-10; 21:17), an angel who calls Gideon the judge (Judges 6:11-21), and so on. It was the Archangel Gabriel who told Zechariah that his wife would bear John the Baptist (Luke 1:11-13). Or, to take the most angelic appearance in history, it was Gabriel who announced to the Virgin Mary that she would bear Jesus Christ (Luke 1:26-38). So angels play a huge, unseen role in our daily lives, aiding us on the way to salvation. While this includes prayer, we now see that it includes countless other ministrations, as well.

As we’ve just seen, Scripture presents several times in which angels speak to men and women. And you know what? The people that they’re talking to often respond. For example, when Gabriel announces the Incarnation to Mary, she asks him how it could happen, given her Virginity (Luke 1:34). Both Abraham and Jacob are depicted as speaking with angels (Genesis 22:11; 31:11), as did Balaam (Numbers 22:34), Samson’s father (Judges 13), and many others. Both the prophet Zechariah (Zechariah 1) and the Apostle John (the Book of Revelation) are presented as having extended conversations with angels. In a few of these examples, it’s unclear if the “angel” is actually Christ, but there’s no question that Scripture presents men speaking with angels, and presents it in a positive manner (unless, like the high priest Zechariah, they’re disrespectful: cf Luke 1:18-20).  Typically, these people speak to angels after the angels begin the conversations. But Scripture doesn’t require this, and King David freely calls upon the angels, along with the rest of Creation, to praise God: “Praise him, all his angels, praise him, all his host!” (Psalm 148:2) and “Bless the Lord, O you his angels, you mighty ones who do his word, hearkening to the voice of his word!” (Psalm 103:20).

(5) The Disciples Even Speak to Demons.

One point that’s often overlooked is that the Disciples are sent out to exorcise demons (Luke 9:1), and this mission entails speaking to them at times. After all, they are driving out demons in the name of Jesus (Luke 10:17). And when non-Disciples start imitating this, driving out demons in the name of Jesus, He doesn’t discourage them (Mark 9:38). For that matter, Christ Himself spoke with demons (Matthew 8:28-32; Luke 8:30). Obviously, it’s not as if Jesus and His followers were making small talk with demons. Rather, they were speaking to them in the course of casting them out. But nevertheless, this point is significant, because it would bizarre to say that it’s okay to speak to demons, fallen angels, in order to cast them out, but not okay to speak to holy angels.

(6) This Doesn’t Violate Scripture’s Prohibition Against “Consulting the Dead.”

Finally, let’s go ahead and anticipate a common Protestant objection:

Praying to the dead is strictly forbidden in the Bible. Deuteronomy 18:11 tells us that anyone who “consults with the dead” is “detestable to the Lord.” The story of Saul consulting a medium to bring up the spirit of the dead Samuel resulted in his death “because he was unfaithful to the LORD; he did not keep the word of the LORD and even consulted a medium for guidance” (1 Samuel 28:1-25; 1 Chronicles 10:13-14).

And that’s all true: Scripture does condemn consulting the dead. Isaiah 8:19 says, “And when they say to you, “Consult the mediums and the wizards who chirp and mutter,” should not a people consult their God? Should they consult the dead on behalf of the living?” The Scriptural condemnation of consulting the dead is closely tied to the idea of trying to go around God. Both 1 Chronicles 10:13 and Isaiah 8:19 point this out clearly. But in the case of praying to the angels or the Saints in heaven, you’re not trying to go around God. You’re trying to go to those close to Him: those who are praying for you, offering up your prayers, and looking out for you in innumerable ways. More importantly, praying to angels isn’t consulting the dead.

After all, angels aren’t dead. After all, these are the angels that didn’t fall, the angels who stand in the presence of the Living God at all times (Matthew 18:10; Luke 1:19; Tobit 12:15; Revelation 8:2). They’re alive in a way that we’re not, alive in a way that we still strive to be.  To act as if angels are dead just because they’re immaterial, spiritual beings is an incredibly anti-Christian attitude. After all, “God is Spirit” (John 4:24), yet we don’t declare “the living God” dead (cf. Hebrews 3:12). This idea that those without bodies are “dead” might make sense for an atheist materialist, but not for a Christian. While we’re on the subject, this is why the prohibition against consulting the dead doesn’t prohibit praying to the Saints. The Sadducees made the same mistake that these Protestant objectors made, and Christ corrected them for it (Mark 12:26-27):

And as for the dead being raised, have you not read in the book of Moses, in the passage about the bush, how God said to him, ‘I am the God of Abraham, and the God of Isaac, and the God of Jacob’? He is not God of the dead, but of the living; you are quite wrong.”

To say that we can’t pray to the Saints because they’re dead is to say that the God of Abraham, Isaac, and Jacob is a God of the dead. If you believe that, you are quite wrong.

To summarize the case for praying to angels, Scripture has revealed to us that there are spiritual beings who are standing in the presence of God, and who are both offering up our prayers to God, and their own prayers for us. More than this, they are tasked with ministering to us to lead us to salvation. Of course we should talk to them: requesting that they pray for specific things, entreat them to protect us in areas in which we realize that we are weak, and the like. In doing this, we are helping them to do what God has tasked them to do. And so it’s the most natural thing in the world that Scripture presents holy men and women speaking with angels. How could they not? Consider Genesis 22:11,

But the angel of the Lord called to him from heaven, and said, “Abraham, Abraham!” And he said, “Here am I.”

Imagine the absurdity of a Protestant Abraham, afraid to speak to the angel for fear that this might somehow be “worship.” Or a Protestant Mary, too “pious” to ask Gabriel about the Virgin Birth.  Of course, I don’t say these things to be rude to Protestants, who act out of a well-meaning piety in avoiding acknowledging or thanking the angels who assist them daily. But I do mean to show that this aversion to praying to angels is unbiblical, and born out of a terribly flawed and anti-Christian notion that the immaterial angels and disembodied Saints in glory are “dead,” when they are in fact in the presence of the living God.