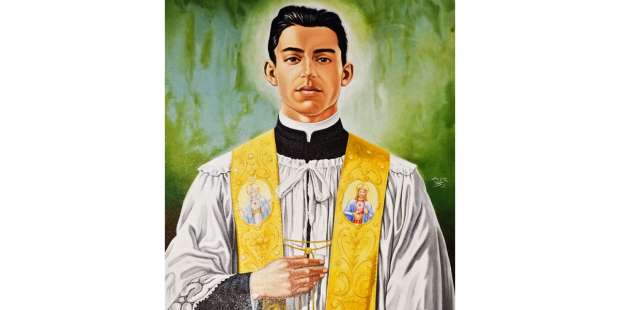 Life of SaintsPeople and History

The damnable and malevolent Cristero War was officially considered over in 1929. But that did not signal the end of the torture, murder and martyrdom of Catholic religious and laity in Mexico.  The following happened in July of 1931. But first a bit of background.

Dario Acosta Zurita was born December 13, 1908, in the town of Naolinco in the Mexican state of Veracruz. He was one of four boys and had one sister. His dad was a butcher and the family, like most other families in the area, struggled to make ends meet. Dario, like his siblings, was baptized in the local church of St. Matthew and his mom was his catechist as he grew up.

Dario was a well behaved, relatively quiet boy. When his dad died, the family fell into extreme poverty. Dario was sent to work to help support the family. In his young heart he had been hearing a calling to the priesthood but he thought he would never be able to answer it. However, God had his plans.

Not long after his father’s passing, Bishop Rafael Guizar y Valencia (an entire story unto himself) visited Veracruz. He was looking for potential seminarians and Dario expressed his desire to become a priest. The bishop (who at one time had to disguise himself as a junkman because there was an order in place for him to be shot on site) told Dario that his responsibility to his mom and siblings superseded his personal wants. In addition, Dario was too young. The bishop told him to pray to Our Lady of Guadalupe for help and guidance.

Dario’s mom learned of this and traveled to Xalapa to see the bishop. She pleaded with Bishop Guizar y Valencia to reconsider. The bishop relented and gave permission for Dario to enter the seminary. The young man won over his superiors and classmates with his kindness, charitable persona and devotion to his faith. In addition, Dario was an excellent athlete and became captain of the seminary football team.

Dario Acosta Zurita became Father Angel Dario on April 25, 1931. The new priest was only 22 years old. He celebrated his first Mass in Veracruz on May 24 and began serving as parochial vicar at the Parish of the Assumption. Father Dario was very dedicated to teaching catechism to both children and adults and he loved being able to hear confessions.

At the same time, the governor of Veracruz, Adalberto Tejeda, decided that he was “sick of the religious fanaticism of the people.” He issued a decree called the “Tejeda Law,” which basically banned all priests from ministering to their parishioners. Mass was banned, catechism classes were halted and confessions were forbidden. All priests in the diocese were notified by numbered letter advising them they must obey the “Tejeda Law.”

The priests in the area gathered on July 21 and agreed that their responsibility was not to the government but to their priesthood and their faith. The decided that they would not obey.

The law took effect on Saturday, July 25, 1931. Sometime after 5 p.m. that afternoon the children began arriving for catechism classes at Ascension Parish while people began getting in line for confession. Three priests were in the church — Father Landa, Father Rosas and Father Dario, who was in the baptistery. Suddenly, a little after 6 p.m., the three doors to the church burst open and soldiers charged inside.

The soldiers opened fire on the priests. Father Landa was gravely wounded. Father Rosas survived by hiding behind the pulpit. Father Dario, upon hearing the gunfire, rushed from the baptistery. His body was riddled with bullets. He fell into the sanctuary as all the children and adults watched in horror. Father’s last word before he died was “JESUS!”

Father Dario Acosta Zurita was only 22 years old when he was martyred. He had been a priest for exactly three months.

Father Zurita was beatified November 20, 2005. The ceremony took place in front of thousands of the faithful at Jalisco Stadium in Guadalajara, Mexico.

Blessed Angel Dario Acosta Zurita, please pray for us all.

Life of Saints People and History No Comments