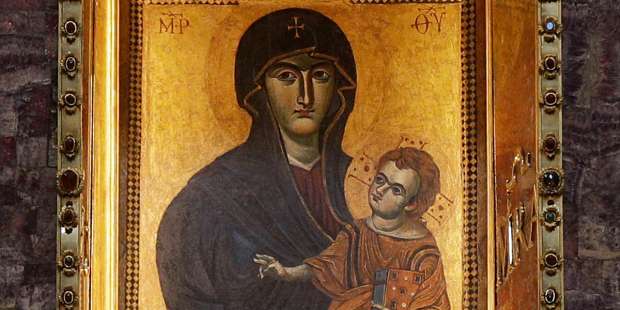 The icon “Health of the Roman People” is associated with a miraculous cleansing of the air during the reign of St. Gregory the Great.

During the 6th century there was a deadly plague that ravaged Italy. It killed a great number of people and was spreading like wildfire.To counteract this epidemic, St. Gregory the Great turned to God and led a procession throughout the streets of Rome. The Golden Legend narrates this event and explains what happened next.

The plague was still ravaging Rome, and Gregory ordered the procession to continue to make the circuit of the city, the marchers chanting the litanies. An image of Blessed Mary ever Virgin was carried in the procession. It is said that this image is still in the church of Saint Mary Major in Rome, that it was painted by Saint Luke, who was not only a physician but a distinguished painter, and that it was a perfect likeness of the Virgin. And lo and behold! The poisonous uncleanness of the air yielded to the image as if fleeing from it and being unable to withstand its presence: the passage of the picture brought about a wonderful serenity and purity in the air.

The air was reportedly cleansed by this image and the plague ceased.

The image is now known by the name, “Salus Populi Romani,” which is translated as, “Health of the Roman People.” It is a favorite image of Pope Francis, who specifically chose it to be in St. Peter’s Square during his historic “Urbi et Orbi” blessing on March 27, for the intention of ending the COVID-19 pandemic.

Interestingly, a procession with the same image was repeated in 1348, during a similar plague. An early 20th-century Pilgrim’s Guide to Rome describes this miracle.

At the high altar is venerated a Madonna attributed to St. Luke and which was carried in a famous procession. This was in 1348; the plague from Asia had invaded all Europe, and made such ravages that cities lost a third, a quarter and even half, their inhabitants. This procession put an end to the scourge in Rome and the Romans, to testify their gratitude, caused the grand flight of steps leading the principal entrance to the church to be built.

It is no surprise that Pope Francis and many Romans continue to favor this image of the Virgin Mary, which is associated with many miracles throughout the centuries.