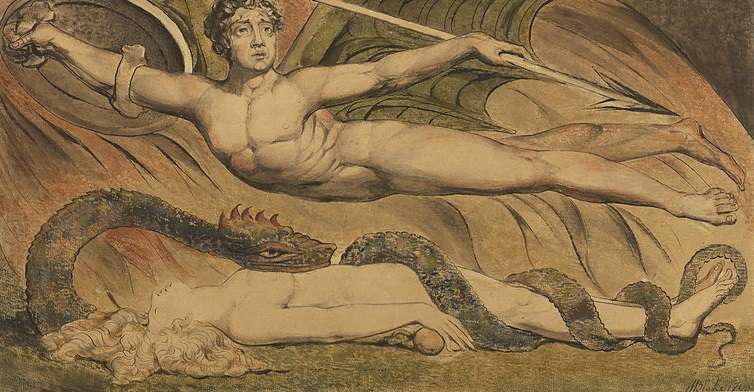 Satan is a snake. Remember that.

He is a liar and the Father of Lies.

He is at work in your life trying to tempt you into sin and to draw you away from God, but he is also at work in the world, trying to deceive you, confuse you. He wants you to lose your faith and turn away from God.

Here are ten of his tricks. Watch them and be aware of what he is up to.

Relativism is everywhere in our society. It takes many different forms. The other tricks of the devil in this post explain some of the different forms of relativism that are traps you can fall into.

This is the idea that all religions are pretty much the same and it doesn’t matter which one you follow. Indifferentism is common within Protestantism. How often have you heard someone say, “It doesn’t matter what church you go to as long as you love Jesus”? This indifferentism extends to multi culturalism as well.

People say it doesn’t matter if you are Hindu, Muslim, Jew, Sikh, Buddhist, Catholic–whatever. “We’re all climbing the same mountain but by different paths.” Well maybe so in a way, but some paths are better than others because they’re more true and to be honest, some of the paths are going down the mountain not up.

This is a close cousin of Indifferentism. Eclecticism is the idea that you can mix and match different religions and spiritualities all together–kind of like those places where you make your own ice cream sundae. People think this is possible because they have already subscribed to indifferentism.

Think it through. You can’t mix up Islam with Christianity or Buddhist spirituality with Catholic prayer. It’s not like making your own sundae. It’s more like putting ketchup on ice cream or using white paint as coffee creamer. Don’t bother.

This is basing moral choices and belief choices based on emotion rather than eternal truths. It can be good emotion or bad emotion. You get mad at someone or some choice someone has made so you base your moral or faith decision on your anger. Or you might feel syrupy and nice about something so you base your emotional choice on that.

Here’s an example: Two guys want to get “married”and you say, “Aww, Ronnie and Donnie are such nice guys! Why shouldn’t they get married just like everyone else?” You’re basing your decision on your emotions about Ronnie and Donnie, your desire to be a “nice” person and sentimental ideas about weddings and celebrations and big days.

Don’t make important decisions only on your emotions. That way chaos and darkness lies.

This is basing moral choices and belief choices only on what seems to be effective, efficient and economical. Mom’s in a rest home. She has dementia. Its expensive to keep her there. The doctors offer to give her an injection so “Her problems will be over.”

Don’t do it. Utilitarianism is why we kill millions of babies through abortion. It seems like the easy thing to do. Observe how utilitarianism is usually linked with sentimentalism: “You wouldn’t want your mother to suffer any further would you? Why you wouldn’t even treat your dog this way!” You see where this goes.

Be clear what he is doing from the start and don’t give in. He will get you to give in to his ways through sentimentalism here, utilitarian arguments there, here a bit of indifferentism, there a bit of relativism. He’s working all the time, nibbling away, never sleeping, never at rest.

I’m not talking about going to the mall to shop until you drop. That’s a minor form of materialism. The deeper problem is the growing conviction that there is no supernatural realm.

God, the angels, demons, heaven and hell? They’re all just a myth. There’s no invisible world. The sacraments are just symbols. The church is just a human institution. The priests are no more than social workers dressed in black. Marriage is just a piece of paper, confession is no more than therapy and self help and baptism and confirmation are just nice rites of passage for our kids.

That’s materialism. Do you recognize it? Repudiate it with all your heart. It’s a lie.

This is the idea that the only kind of truth you can know is scientific truth. Nobody states this as such. It’s a powerful lie of Satan because it is one of those things which is simply assumed in society.

“We all know that science has disproved the Bible right?” Wrong. All truth is God’s truth and true science is always the sister of true theology.

Scientism is an offshoot of assumed atheism. “There isn’t a God. There is just the laws of science. That’s all.” Spot it and name it.

This is another name for moral relativism. The idea is that nothing is right or wrong except for the intentions and circumstances of the moral choice. If you mean well and the circumstances justify it, then what you’ve chosen to do is okay. Huge numbers of Catholics have accepted first artificial contraception and then abortion because of situational ethics.

It’s easy to see that this form of relativism is usually linked with sentimentalism and utilitarianism to bring people to the point of choosing mortal sin, but never admitting it and justifying their choice. It’s not Catholic. Don’t fall for it. If you are faced with a difficult moral decision talk to your priest or a good spiritual advisor.

This poison straight from hell is the idea that God is so loving, kind and merciful that he won’t send anyone to hell. In other words, everybody will be saved.

This not only directly contradicts Sacred Scripture, but it contradicts all the teaching of the Church for the last two thousand years. It has lulled thousands into the false security that in the end it doesn’t matter what they do and what they choose because they will all make it to heaven at last.

Satan loves universalism because he gets to dress up his lie in the clothes of the Father’s greatest attribute: the Divine Mercy. The best way to repudiate this lie is to fear hell.