St. Thomas More is remembered for his fidelity to his conscience, but his example of fatherhood is sometimes overlooked.

Patron of lawyers and public servants, St. Thomas More is honored today as a 16th-century martyr. As the faithful did during his life, many continue to look to his selfless example as a powerful member of the English government, but his strong example of fatherhood is often overlooked and underemphasized.This year, the feast day of St. Thomas More falls on the day just after Father’s Day. It is fitting that we remember the difficult position that he was in, as a dad forced to choose between compromising his conscience for a tyrannical king or submitting to God.

Many know about St. Thomas More from the Academy Award-winning 1966 film, A Man for All Seasons, which highlights the last days of his life.

When Henry VIII and his wife couldn’t conceive a son, the king petitioned the pope for an annulment. The pope refused—he couldn’t grant an annulment for a valid marriage—which led Henry to split the Church of England from the Catholic Church, paving the way for his divorce and remarriage.

Pressure mounted in England to show enthusiasm for the king’s new wife, and the king required the entire kingdom to swear an oath acknowledging the legitimacy of his second marriage and the king as the head of the new “church.”

In fidelity to the pope and the Church’s teaching on marriage, More knew he couldn’t swear. He had already resigned from his powerful position as chancellor, one of the highest-ranking offices in the English government. When he refused to sign the king’s oath, he was arrested and imprisoned in the Tower of London, shortly to be executed for his continued dedication to the sanctity and indissolubility of marriage.

More’s powerful dedication to the sacrament of marriage came in no small part from his prayerful discernment of fatherhood, which began long before he was married.

A devout Catholic, More spent part of his youth discerning religious life, even going so far as to spend several months in a Carthusian monastery. But More realized he wasn’t called to be a spiritual father only – he had a deep love of family life that pushed him to realize that God was calling him to the vocation of marriage.

A year after leaving the Carthusians, More married his first wife Jane, and had four children with her. Undoubtedly, More’s experience discerning religious life with the Carthusians helped prepare him to be a good and holy father – one who showed dedication to his wife, with whom he had a happy marriage, and who cared for the physical and spiritual needs of his four children.

In the footsteps of St. Joseph

More’s marriage to Jane was cut short when she died after just six years of marriage. Soon after, he married a woman named Alice, believing his small children needed a mother to help raise them. Alice was also a widow and had a daughter from her previous marriage. More and Alice didn’t conceive any children together, but More did find himself following in the example of St. Joseph, the foster father of Jesus. He welcomed Alice’s daughter as his own child, treating her no differently than the four children he had with Jane.

More’s commitment to fatherhood extended even further. He adopted a neighbor girl after the death of her mother, and also took in another girl, bringing his total number of children up to seven.

When he was imprisoned, his wife and children would come to visit him, even trying to convince him to give into the king’s demands so that he might return home. More lovingly refused, instead urging his family to stay strong in their faith and to flee the country. One of his adopted daughters, Margaret Clement, was his only child present for his martyrdom.

More’s final words were a powerful declaration: “I am the king’s good servant, and God’s first.”

Today, a new video series, Into the Breach, addresses the importance of fatherhood. Produced by the Knights of Columbus, an episode explains “Our culture attacks fatherhood by trying to make it irrelevant.”

But St. Thomas More’s witness exemplifies what Catholic men should strive for in their work and family life, and why fatherhood is more relevant than ever in today’s world. As a public servant, a husband and a father of seven, More was well-respected and admired. But he always knew that his primary role as a father was to serve as an example of Christian life to his children – a role which, in his instance, required him to face one of the earth’s most powerful rulers and give his life as a martyr … and become a saint. 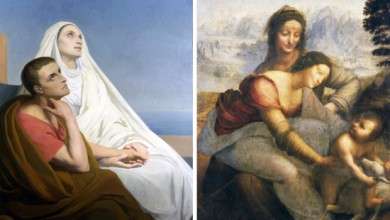