Youth are torn between discouragement, anger, and hope. Many young adults are on the streets …

“If we drive a population to despair, we drive it to violence,” reflected Monsignor Pascal Gollnisch, director general of L’Œuvre d’Orient, a French organization that supports Eastern Christian “bishops, priests, and religious congregations that help everyone, regardless of their religious faith.”

At their last meeting in Rome on January 17, 2020, the members of the Meeting of Aid Organizations for Christians of the East focused their attention on new generations’ perspective of the situation in the Middle East.

The organizations in the meeting are “collaborators of the Holy Father” responsible for following up on questions relating to the Eastern Catholic Churches.

Aleteia: You have focused on the theme of youth. Why this choice in particular?

Monsignor Pascal Gollnisch: In the situation in the Middle East, we see that youth are torn between discouragement, anger, and hope. Many young adults are on the streets, whether in Iran, Iraq or Lebanon. We can sense that something is happening, certainly facilitated by the internet, but which does not boil down to a simple issue of social networks.

There’s a real awareness among this new generation of adults of the need for their countries to change, to move forward, to respond to what they are waiting for so that they can build their lives there. If we push a population to despair, we push it to violence. It’s therefore extremely important to meet those expectations. The expectations of the new generations have not been met.

Perhaps Westerners have for too long believed that these populations could make do with corrupt or dictatorial powers, in an absence of religious pluralism. In reality, no country is destined to stand by the wayside. The people’s anger is a call to attention for us and shows us that this region of the world must move forward. The problems haven’t been solved there and the international community has its share of responsibility.

The American intervention in Iraq to overthrow President Saddam Hussein was, for example, accompanied by the devastation of the Iraqi state and its army. This made the arrival of “Daesh” (ISIS) possible. As a result, nothing was fixed in the country. It’s high time that the problems in this region were thoroughly resolved and that young adults regained confidence in their country.

The American intervention in Iraq to overthrow President Saddam Hussein was, for example, accompanied by the devastation of the Iraqi state and its army. This made the arrival of “Daesh” possible.

Are Christians the only victims of this situation?

Of course, Christians suffer discrimination and violence. However, it’s really a problem for the whole region of the world. It is a crossroads region: Asia, Africa, Europe and the Mediterranean Sea. This crossroads cannot remain continuously on fire and without a viable long-term solution.

Of course, the Western countries are looking out for their own interests, as are all the governments of the world. But sometimes the problem of Westerners has been that they only seek their short-term interests. In the short term, nothing lasting is built.  In particular, we don’t build basic values that allow societies to stand on their own feet. We must therefore look for medium-term solutions and even, if possible, long-term solutions. For us, it’s not just a question of to whom we send a check. This is not just a crisis meeting: it’s a meeting that poses the question of the relations between our churches. We have an ecclesial approach, which is absolutely essential. 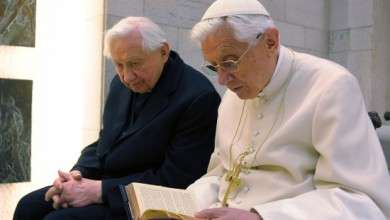 These African pastors want to maintain Christ's love, and truth, at the synod