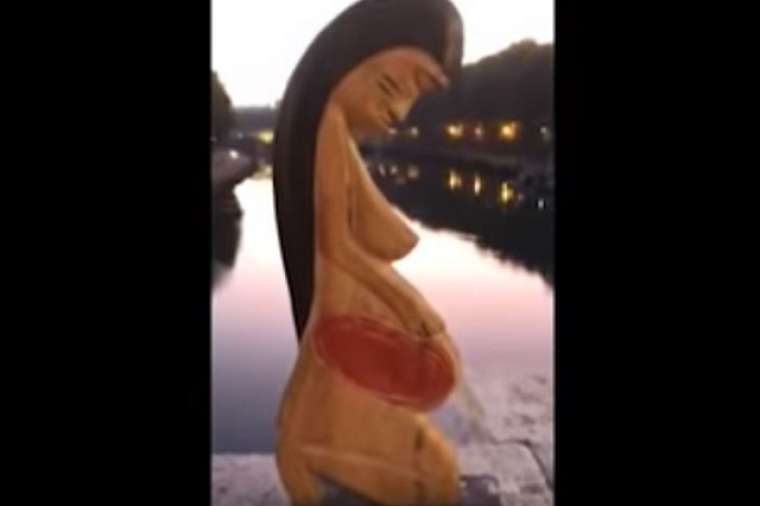 A video uploaded to YouTube on Oct. 21 shows two men taking several wooden figures of a nude pregnant woman from a church near the Vatican.

ROME — A video uploaded to YouTube on Oct. 21 shows two men taking several wooden figures of a nude pregnant woman from a church near the Vatican and throwing them into the Tiber River.

From the four-minute video it appears the event took place around dawn Oct. 21, when a person holding the video camera appears to enter the Church of Santa Maria in Traspontina. The Church is in the immediate area of the Vatican and St. Peter’s Basilica and has been the location of events at which the controversial carved figure has been present.

Inside the church, a man is seen entering a side chapel and then leaving with a figure. The two people then exit the church, and the video shows them carrying five of the carved images of the woman toward Castel Sant’Angelo. The men throw the figures from the side of the Sant’Angelo Bridge into the Tiber River.

No faces are shown, and the video was uploaded to YouTube under an anonymous account. As of publication, the video had amassed more than 12,000 views.

“Video has emerged of two men entering a church near the Vatican and stealing indigenous statues. They then filmed the statues being thrown into the Tiber River”. #AmazonSynod #SinodoAmazonico pic.twitter.com/IXx5NgFDZN

The same YouTube account uploaded a second video of the event Oct. 21. The second video is shorter, of higher video quality, and has been edited, with music added.

In the caption beneath the second video, it says the action was taken “for only one reason: Our Lord and Savior Jesus Christ, his Blessed Mother and everybody who follows Christ are being attacked by members of our own Church. We do not accept this! We do not longer stay silent! We start to act NOW!” [sic]

“Because we love humanity, we cannot accept that people of a certain region should not get baptised and therefore are being denied entrance into heaven,” the caption continues. “It is our duty to follow the words of God like our holy Mother did. There is no second way of salvation. Christus vincit, Christus regnat, Christus imperat!”

Asked about the event at a news conference Oct. 21, Paolo Ruffini, head of Vatican communications, called it a “stunt.”

He said it is difficult to be asked for a Vatican reaction to something that had happened only a short time earlier, adding that “to steal something from a place and, in sum, to throw it away, is a stunt.”

Recalling comments he had made last week that the figure “represents life, fertility, the earth,” Ruffini said Oct. 21  that discarding the statues “is a gesture that seems to me to contradict the spirit of dialogue that should always animate everything.”

“I don’t know what else to say. It was a theft,” Ruffini added.

Father Giacomo Costa, a communications official for the Amazon synod, said Oct. 21 the carved figure represents life in the Amazon in the same way a “water bottle” or “parrots” represent life in the region.

Focus on the statues, and the gesture of throwing them into the Tiber river, “doesn’t make sense,” Costa said.

The priest added that, “really, however, it is never constructive to steal an object.”

The controversial image was part of a tree-planting ceremony in the Vatican Oct. 4 and an Amazonian Via Crucis Oct. 19. The same figure has been present in the vicinity of the Vatican at various events happening during the synod, under the “Casa Comun” initiative, many of which have taken place at the Church of Santa Maria in Traspontina.

The Synod of Bishops on the Pan-Amazon Region is a meeting on the life and ministry of the Church in the Amazon. It is taking place at the Vatican through Oct. 27.

In a separate event, a small group of people supporting an alleged Marian visionary in Texas were also present outside the Church of Santa Maria in Traspontina Oct. 21, protesting the Amazon synod. Four people stood outside the church, two of whom held signs with “the synod is heretical” written in English, Italian and Latin.

The group handed out small slips of paper to passersby with the text: “Christ and Mary have come with new words and warnings The Amazon synod is heretical. Do not miss the signs.”

Both the signs and the slips of paper pointed people to visit the website of a group supporting an alleged Marian apparition, which supporters call “Our Lady Mystical Rose of Argyle.” The Bishop Michael Olson of Fort Worth, Texas, said in August the alleged apparitions are not real and released video evidence of the alleged visionary hiding a rose she later claims to have been manifested by the Blessed Virgin Mary.

Supporters of the alleged apparitions say that Satan is trying to discredit their visions.

The protesters, among them the alleged visionary, were present outside Santa Maria in Traspontina at around 1pm Oct. 21, but by 3pm were no longer seen there.