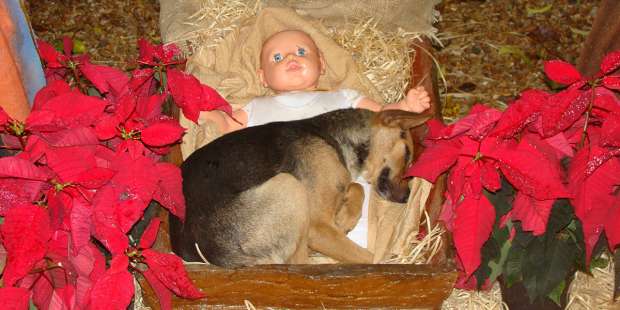 In the creche of a public Nativity scene, a puppy finds comfort and rest … and a new family.

A touching episode that took place in Criciúma, Brazil, in 2008 has gone viral again! An unusual “living statue” joined a Nativity scene set up in one of the southern Brazilian city’s squares: in the manger at the feet of the Baby Jesus, a German shepherd puppy, abandoned by its owners, found warmth and shelter in the hay.

The imperturbable calm of the puppy sleeping at the side of the Baby Jesus, despite being watched by the eyes of hundreds of visitors, charmed the town’s citizens who visited the Nativity scene that day.

When the pup eventually awoke to see the cameras of curious passers-by, he was startled at first, but the story has a happy ending worthy of Christmas: just as someone had abandoned him, someone else decided to adopt him and welcome him into their home.