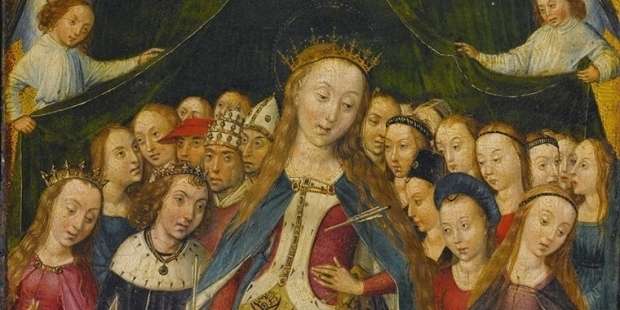 Home » People and History » Life of Saints » AND TODAY WE CELEBRATE…SAINT OF THE DAY: St. URSULA AND COMPANIONS (WEDNESDAY, OCTOBER 21)

+ According to legend, Ursula was the daughter of a Christian king of Britain.

+ Traveling to the continent with eleven companions, these holy virgins were said to have been tortured to death for refusing to denounce their faith.

+ The relics of Saint Ursula, and those of her companions, are claimed by the Cathedral of Cologne.

+ Devotion to these virgin-martyrs endured for centuries. Saint Ursula was chosen by Saint Angela Merici to be the patroness of the religious community she founded in 1535.

+ These martyrs are honored as the patrons of the British Virgin Island and, because of the efforts of Saint Angela Merici, Saint Ursula is honored as a patron saint of teachers and of students.

+ Saint Odilia, one of Ursula’s companions, is honored as the principle patroness of the Crosier Fathers and Brothers.

+ While their celebration was left to local observance in the reforms of the General Roman Calendar of 1969, the memory of Saint Ursula and her companions and her companions was retained in the Roman Martyrology (the Church’s official listing of saints).

“Then one of the elders spoke up and said to me,

‘Who are these wearing white robes,

and where did they come from?…

These are the ones who have survived the time of great distress;

they have washed their robes

and made them white in the Blood of the Lamb.”—Revelation 7:13 and 14b

O God, you gave to the virgins consecrated to you under the leadership of Ursula, the courage of their wonderful combat, so that by the victory of martyrdom they arrived at the glory of the Beatific Vision; grant, we beseech you, that we may be helped by those whom you have enabled on this day to pass form mortal combat to triumph in heaven. Through Christ our Lord.