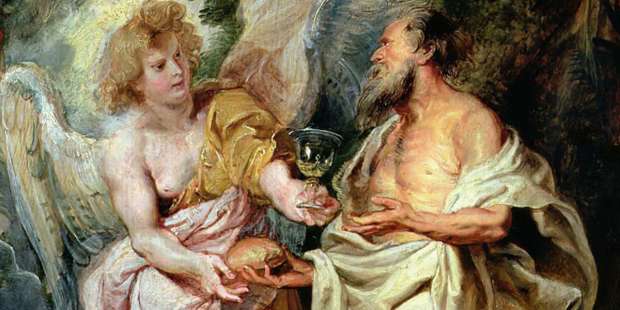 AND TODAY WE CELEBRATE… Saint of the Day: The Prophet Elijah (MONDAY, JULY 20)

Home » People and History » Life of Saints » AND TODAY WE CELEBRATE… Saint of the Day: The Prophet Elijah (MONDAY, JULY 20)

Miracle worker and prophet of the Old Testament (Ninth Century BC)

+ An important figure in Judaism, Islam and Christianity, Elijah (or Elias) upheld the true worship of God against the cult of Baal (cf. I Kings 16:29-19:18) during the reign of King Ahab, nine centuries before the birth of Christ.

+ Known for his strong criticism of both the rulers of his day and the illicit forms of worship gaining hold among the Jewish people, some believed that John the Baptist (cf. Matthew 17:9-13; Mark 9:9-13) and even Jesus (cf. Matthew 16:14) were manifestations of Elijah.

+ The Second Book of Kings relates that at the end of his life, Elijah was taken up to God in a fiery chariot. His prophetic mission then passed to his disciple, Elisha.

+ This holy prophet appeared with Moses during the Transfiguration of Jesus.

+ A medieval tradition credited the prophet Elijah with having founded the Carmelite Order, whose first members lived as hermits on Mount Carmel, where Elijah had made his home nearly two millennia before.

+ In the folklore of Central Europe this prophet is known as “Elijah the Thunderer” and he is credited (or alternately blamed) for summer storms, hail, rain, and dew.

“The staff of life, their bread, he shattered,

and in his zeal he made them few in number.

By God’s word he shut up the heavens

and three times brought down fire.

How awesome are you, Elijah!

lived always in your presence

and was zealous for the honor due to your name.

May we, your servants,

and bear witness to your love.

(from The Carmelite Sacramentary)

Articles Life of Saints Prayers Prayers to Saints No Comments