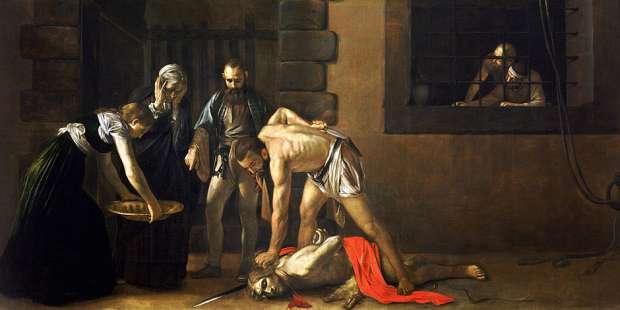 AND TODAY WE CELEBRATE… The Passion of Saint John the Baptist (SATURDAY, AUGUST 29)

Home » People and History » Life of Saints » AND TODAY WE CELEBRATE… The Passion of Saint John the Baptist (SATURDAY, AUGUST 29)

The Story of the Martyrdom of John the Baptist

The drunken oath of a king with a shallow sense of honor, a seductive dance and the hateful heart of a queen combined to bring about the martyrdom of John the Baptist. The greatest of prophets suffered the fate of so many Old Testament prophets before him: rejection and martyrdom. The “voice crying in the desert” did not hesitate to accuse the guilty, did not hesitate to speak the truth. But why? What possesses a man that he would give up his very life?

This great religious reformer was sent by God to prepare the people for the Messiah. His vocation was one of selfless giving. The only power that he claimed was the Spirit of Yahweh. “I am baptizing you with water, for repentance, but the one who is coming after me is mightier than I. I am not worthy to carry his sandals. He will baptize you with the Holy Spirit and fire” (Matthew 3:11).

Scripture tells us that many people followed John looking to him for hope, perhaps in anticipation of some great messianic power. John never allowed himself the false honor of receiving these people for his own glory. He knew his calling was one of preparation. When the time came, he led his disciples to Jesus: “The next day John was there again with two of his disciples, and as he watched Jesus walk by, he said, ‘Behold, the Lamb of God.’ The two disciples heard what he said and followed Jesus” (John 1:35-37).

It is John the Baptist who has pointed the way to Christ. John’s life and death were a giving over of self for God and other people. His simple style of life was one of complete detachment from earthly possessions. His heart was centered on God and the call that he heard from the Spirit of God speaking to his heart. Confident of God’s grace, he had the courage to speak words of condemnation, repentance, and salvation.

Each of us has a calling to which we must listen. No one will ever repeat the mission of John, and yet all of us are called to that very mission. It is the role of the Christian to witness to Jesus. Whatever our position in this world, we are called to be disciples of Christ. By our words and deeds, others should realize that we live in the joy of knowing that Jesus is Lord. We do not have to depend upon our own limited resources, but can draw strength from the vastness of Christ’s saving grace.

On this day, we also remember Saint Jeanne Jugan. After dedicating herself to caring for the sick and poor, she established the Little Sisters of the Poor to continue this good work. After years of service and suffering, she died on August 29, 1879, and was canonized in 2009.

O God, who willed that Saint John the Baptist

should go ahead of your Son

both in his birth and in his death,

grant that, as he died a Martyr for truth and justice,

we, too, may fight hard

for the confession of what you teach.