When Catholics talk about praying to Mary, a classic Protestant objection is “but I can go directly to Jesus!” To that, I’d say, “True, you could go to Jesus alone… but if you pray to Mary, you and the Virgin Mary can go directly to Jesus!” The “why not just go directly to Jesus” objection points to one of the real differences between Catholics and Protestants on this question: we Catholics believe that some prayers are more efficacious than others, and some people’s prayers are more efficacious than others. That teaching might sound shocking, but it’s solidly Biblical. Let’s consider it in two parts.

1. The Prayers of the Righteous Are Worth More than Those of the Unrighteous

James 5:16 says “Therefore confess your sins to one another, and pray for one another, that you may be healed. The prayer of a righteous man has great power in its effects.” That’s not an extraneous adjective, either. The holiness of the person praying matters. Hebrews 5:7 even says of Jesus that, “In the days of his flesh, Jesus offered up prayers and supplications, with loud cries and tears, to him who was able to save him from death, and he was heard for his godly fear.” In contrast, Proverbs 28:9 says that “If one turns away his ear from hearing the law, even his prayer is an abomination.” And the Psalmist says “If I had cherished iniquity in my heart, the Lord would not have listened. But truly God has listened; he has given heed to the voice of my prayer” (Psalm 66:18-19).  The blind man of John 9:31 says it simply: “We know that God does not listen to sinners, but if any one is a worshiper of God and does his will, God listens to him.”

This is powerfully illustrated at the end of the Book of Job (Job 42:7-10), in which God instructs Job’s friends (Eliphaz, Bildad, and Zophar) to have Job intercede for them that they might avoid punishment:

2. The Prayers of Some Christians Are Worth More than Others

So what about when it’s two righteous people praying? Is one Christian’s prayer worth more than another’s?

I’ve found multiple Protestant writers raise this question and then avoid answering it, and I suspect that there may be a reason for that. On the one hand, their theological leanings are such that they want to avoid anything that sounds like individuals merit or that there’s anything like a spiritual hierarchy. Plus, many Protestants think of righteousness as something you either have or don’t, rather than something that admits of degrees.

On the other hand, it’s hard to ignore the Scriptural data suggesting that certain individuals’ prayers are particularly efficacious, even compared with other believers. The clearest instance of this is Abraham’s intercession for Lot and his family when the city of Sodom is destroyed. God is going to punish the city of Sodom for its sinfulness, but He says (Genesis 18:17-19),

Shall I hide from Abraham what I am about to do, seeing that Abraham shall become a great and mighty nation, and all the nations of the earth shall bless themselves by him? No, for I have chosen him, that he may charge his children and his household after him to keep the way of the Lord by doing righteousness and justice; so that the Lord may bring to Abraham what he has promised him.

By this point, God had chosen Abraham due to his faithfulness. And now, God is using that to invite Abraham to intercede for the city of Sodom. Abraham does so, saying ““Wilt thou indeed destroy the righteous with the wicked? Suppose there are fifty righteous within the city; wilt thou then destroy the place and not spare it for the fifty righteous who are in it?” (Gen. 18:23-24). He then continues to plead for Sodom until God agrees not to destroy the city if there are even ten righteous people in it (Gen. 18:32). The problem is, there aren’t. The only righteous people left in the city are Lot and his family. And yet God still shows mercy upon these few by saving them… and it’s all due to Abraham’s intercessory prayer. That’s not my assumption, the text actually says: “So it was that, when God destroyed the cities of the valley, God remembered Abraham, and sent Lot out of the midst of the overthrow, when he overthrew the cities in which Lot dwelt” (Genesis 19:29).

Why does that matter? Because unlike Job’s friends, there’s no question that Lot is righteous. If he weren’t, he would have be destroyed along with the rest of the city. And yet his deliverance is explicitly due to Abraham’s prayerful intervention. And there’s a reason that God goes to Abraham rather than to Lot directly, just as there’s a reason that we’re repeatedly told to pray for one another, and to have others pray for us. The Bible is very clear about the fact that we should pray, but also about the fact that we should get other people — especially holy people — to pray for us. So there you go: that’s the Biblical foundation of why we go to the righteous, whether on earth or in Heaven. 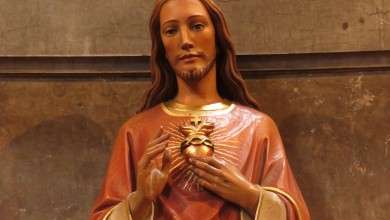