JESUS’ BREAD OF LIFE DISCOURSE  in John 6 is to a Catholic what a hammer is to Thor. Pretty much every Catholic who has been pinned down by an objection in a debate with a Protestant has pulled out John 6 to gain the upper hand. “Oh, yeah?” the Catholic says trying to gain some ground. “What about John 6 where Jesus says, ‘Unless you eat the flesh of the Son of Man and drink his blood you have no life in you (John 6:53)?’ Booya!”
The Catholic is confident that John 6 shows that Church teaching on the Eucharist, which states it’s literally Jesus’ body and blood, corresponds with the Bible, thereby establishing a biblical basis for Catholic teaching.
But the Protestant has a few hammers of his own to counter the literal interpretation of Jesus’ words. There are four that are most commonly used:

The argument from cannibalism

The objection: If Jesus intended his words “eat my flesh . . . and drink my blood” (John 6:54-58) to be taken literally, he would have been commanding cannibalism. But that is absurd. Therefore, Jesus didn’t intend for us to interpret these words literally, only metaphorically.
There are three reasons why this objection doesn’t hold water.
First, the comparison is dis-analogous. Jesus reveals at the Last Supper that he did not intend for us to partake of his flesh and blood in a cannibalistic form (Luke 22:19-20).
For example, when the apostles partook of the Eucharist, they did so in an unbloody manner—under the appearance of bread and wine. There was no shedding of blood. It is the same for Catholics today.
Furthermore, cannibals kill and eat parts of their victims. In receiving the Eucharist, Catholics don’t kill Jesus, nor do they eat part of him. We partake of the whole Christ (body, blood, soul, and divinity) who remains alive in his glorified state (see below). That’s a mystery.
Cannibalism and partaking of the Eucharist are two radically different things. Therefore, one cannot compare one to the other.
In his audio set Living Bread: A Defense of Christ’s Real Presence in the Eucharist, Tim Staples gives a second reason why this objection fails. He argues that if it were true it would prove too much. If eating Jesus’ flesh and drinking his blood were immoral in an absolute sense, then Jesus’ command for us to symbolically eat his body and blood would be a moral atrocity as well. Symbolically performing an immoral act would of its nature be immoral (e.g., extending a middle finger). But that is contrary to the holiness of Christ. Therefore, the charge of cannibalism doesn’t fly.
Third, Jesus dispels the idea of cannibalism when he refers to his ascension: “What if you were to see the Son of man ascending where he was before?” (John 6:62). Bible scholar Brant Pitre explains:

Jesus was not speaking about eating the dead flesh of his corpse (this would be cannibalism). Rather, he was speaking about eating the living flesh of his resurrected body, which would be raised to “life” by the power of “the Spirit” and then taken up to heaven in the ascension (Jesus and the Jewish Roots of the Eucharist: Unlocking the Secrets of the Last Supper, 111).

Knowing that it’s Jesus’ glorified body that he intends for us to feed on in a non-cannibalistic manner, the cannibalism objection has no force.

The argument from the prohibition of drinking blood

The objection: Jesus can’t mean for us to literally partake of his blood because the Bible forbids such behavior in Leviticus 17:10-11.
It’s true that Leviticus 17:10-11 forbids the partaking of blood. However, the book of Hebrews tells us that the Levitical law has passed away with the advent of Christ: “For when there is a change in the priesthood, there is necessarily a change in the law as well” (Heb. 7:12).
The prohibition against partaking of blood is not a precept rooted in the natural law, which is forever binding (Rom. 2:14-15). It is disciplinary in nature, and therefore subject to change.
St. Paul affirms this in response to the Judaizers, a first-century heretical sect that taught the Levitical law was still binding for salvation in the New Covenant: “Food will not commend us to God. We are no worse off if we do not eat, and no better off if we do” (1 Cor. 8:8).
Another reason the Levitical prohibition doesn’t militate against the Catholic understanding of Jesus’ teaching in John 6 is that Jesus gives a positive command, which by its nature supersedes the Old Testament precept. This follows upon the previous reason since God can change only that which is disciplinary in nature and never a precept of the natural law.
Consider Jesus’ teaching on the Sermon on the Mount. Six times Jesus says, “It has been said . . . but I say to you” (Matt. 5:21-22, 27-28, 31-32, 33-34, 38-39, 43-44). A clear example is Jesus’ teaching that Moses’ permission of divorce and remarriage is no longer valid (Matt. 5:31-32). He appeals to God’s original design for marriage to substantiate his claim. Jesus’ positive command, no divorce and remarriage, supersedes the Old Testament precept that permitted such behavior.
Not only has the Levitical law passed away, which by itself is sufficient to show that the prohibition against partaking of blood is no longer binding, but Jesus gives a positive command to partake of his blood thereby superseding the Old Testament discipline.

So, for those of us who partake of Jesus in Holy Communion, rest assured that we’re not cannibals, nor are we violating God’s divine law as prescribed in the Bible. You can receive the Eucharist in peace.
“But,” you ask, “what about Jesus’ teaching on how ‘the flesh profits nothing’ and how his words are ‘spirit and life?’ What about his teaching that he is a ‘door’ and a ‘vine?’ Do these teachings disprove the literal understanding of John 6?” Look in the near future for the my second article in which I answer these two remaining objections. 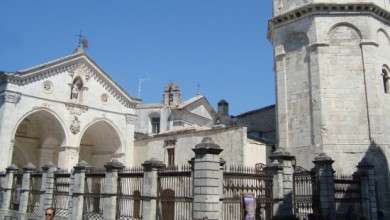 My Personal Story as a Catholic Conscientious Objector