Jesuit Father Mauricio Jiménez is now on the road to canonization.

Fr. Mauricio’s reputation for holiness was well-known. Twenty-five years had passed since his death, and his legacy as a Jesuit formator and as a beloved priest, preacher, and confessor at the various locations where he exercised his ministry has lasted over the years. His remains lay in the cemetery of the Colegio Maximo, in San Miguel, when they were exhumed on January 15, 1979.

His coffin had practically disintegrated. Surprisingly, his body had not. It was flexible and complete. Three different doctors confirmed this. Two weeks later, when he was buried anew, it was the duty of the man who was then the Jesuit provincial, Fr. Jorge Bergoglio, to ratify this fact. “I bear witness and swear before God our Lord that during these days, from the exhumation until today, the mortal remains of Fr. Mauricio Jiménez did not undergo any treatment to conserve its incorruption. In the same way, no element of this kind has been placed in the zinc coffin in which his body has just been placed.”

Five years earlier, when Fr. Bergoglio was the director of the Colegio Maximo, it had fallen to him as the vice-postulator of the cause to present the beginning of an investigation, with the goal of the eventual beatification and canonization of the servant of God Fr. Mauricio Jiménez Arteaga, SJ.

Thirty-three years later, in March 2018, Fr. Mauricio’s remains were moved to the Parish of Our Lady of Perpetual Help, in the Villa Trujui neighborhood, where Jesuit missionaries had worked since the neighborhood was established, 30 blocks from the Colegio Maximo. Here, people pray with special devotion for his swift beatification, especially on the 8th day of every month, together with the devotion to Our Lady Undoer of Knots.

This holy formator of missionary disciples, as he is usually remembered, was born in Spain on September 22, 1881. As a child, he was a humble shepherd who learned to love the Virgin Mary by praying the Rosary at the little chapel of Our Lady of Ulagares, the patroness of the town, to whom he had a particular devotion throughout his life; he mentioned her in the very last letter he wrote. He entered the Jesuit novitiate, and was ordained to the priesthood on July 27, 1913, in the Colegio Máximo de Dertos, in Tarragona. He distinguished himself in Spain as a formator, a mission which he was then sent to carry out in South America, where he was needed. He arrived in Argentina in 1930.

For 18 years, he was the master of novices in Cordoba, Argentina, where he was also the director of the Colegio de la Sagrada Familia on two occasions.  However, his apostolic zeal extended far beyond training future Jesuits; he also carried out an immense work in education, hospitals, spiritual exercises, etc. He continued his work in Montevideo for four years, and then in Buenos Aires as a “rank-and-file soldier,” not in a position of authority—a situation he enjoyed very much—where he lived until his death on December 8, 1954, the 100th anniversary of the declaration of the dogma of the Immaculate Conception. Shortly before dying, when he received Last Rites, he quoted the Psalms in a soft voice, “I rejoiced when they said to me, ‘Let us go to the house of the Lord.’”

He was a model priest, a man of peace always ready to listen to God and to others, and a devotee and promoter of devotion to the Virgin Mary. Fr. Mauricio’s testimony continues not only in the lives of those who knew him, but also in his letters and writings.

Fr. Julio Merediz, who was the vice-postulator for the cause of St. José Gabriel del Rosario Brochero (an Argentinian known as “the cowboy priest”), now exercises the same role for Fr. Mauricio.

He met the Servant of God personally, and has always been pastorally involved in the area where Fr. Mauricio’s mortal remains now lie. In a recent conference at the parish of Our Lady of Perpetual Help, he remembered these beautiful words that Father Mauricio spoke during a meditation on the occasion of the Feast of the Sacred Heart.

In the Heart of Jesus, we love all men. If we were to exclude even just one, we would not be in that heart. In that heart, we cannot remain indifferent to any human misfortune. We cannot tolerate any exploitation of man by fellow man.

[The Heart of Jesus is] strong, like waves without shorelines. A Heart in which sinners and publicans find forgiveness. A Heart that knows all things. A Heart that is powerful in its Mercy. A Heart burning with deep fervor of all noble desires. It is this Heart that we ask to teach us to love.

Heart, Heart, last recourse of all human history. Heart, absolute guarantee of the promises of God, teach us hope. Heart, which remains immovable in its complete fidelity, regardless of our abandonment and betrayal due to our human weakness, Heart as solid as eternal rock, absolute guarantee of all things, make our faith definitively faithful.

For this reason, the cross is the sign of a love that overcomes all temptations, all doubts, and all divisions, because in our history of sin, the mercy of the Heart of Jesus covers us completely.

On the most recent celebration of the feast of St. Ignatius of Loyola, on July 31, 2019, the diocesan phase of the process of beatification of Fr. Mauricio Jiménez was concluded. According to reports, the documents and the work of the historical commission were handed in to the Vatican’s Congregation for Saints’ Causes. 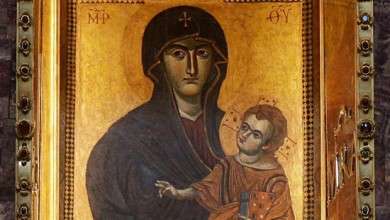 Statue of Jesus opens and closes eyes on camera! 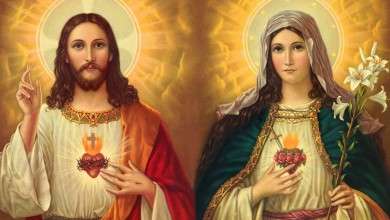 Prayer for the Morning (Monday, November 1) 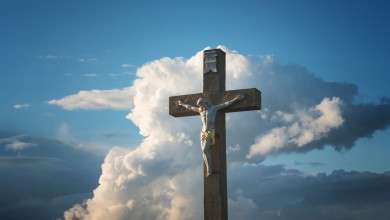