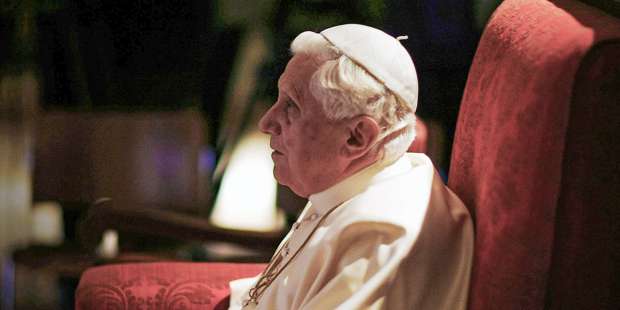 “Instead of the fire that destroyed man, we have consumed the fire in the bread and have been invigorated”

Benedict XVI dedicated a general audience reflection in 2007 to St. Ephrem, who was born in modern day Turkey, in Nisibis, at the start of the 300s.

He was active in the Christian community there until the city fell to the Persians, and then he emigrated to Edessa, where he died in 373.

Benedict noted how he was a theologian-poet, saying the convergence of poetry and theology is what makes his work so special.

“If we desire to approach his doctrine, we must insist on this from the outset: namely, on the fact that he produces theology in poetical form.”

It was poetry that enabled him to deepen his theology “through paradoxes and images.”

He noted how his understanding of God as Creator was fundamental, such that “the world, next to Sacred Scripture, is a Bible of God. “

As well, “The role of women was important to Ephrem.”

The Holy Father went on to quote several of Ephrem’s verses, while acknowledging that they are hard to share because of the difficulty of translation.

Here is what he offered:

I shall propose to you several splendid images taken from his hymns On the Nativity of Christ. Ephrem expressed his wonder before the Virgin in inspired tones:

“The belly of your Mother changed the order of things, O you who order all! Rich he went in, he came out poor: the High One went into her [Mary], he came out lowly. Brightness went into her and clothed himself, and came forth a despised form….

To express the mystery of Christ, Ephrem uses a broad range of topics, expressions and images. In one of his hymns he effectively links Adam (in Paradise) to Christ (in the Eucharist):

“It was by closing with the sword of the cherub that the path to the tree of life was closed. But for the peoples, the Lord of this tree gave himself as food in his (Eucharistic) oblation.

“The trees of the Garden of Eden were given as food to the first Adam. For us, the gardener of the Garden in person made himself food for our souls. Indeed, we had all left Paradise together with Adam, who left it behind him.

To speak of the Eucharist, Ephrem used two images, embers or burning coal and the pearl. The burning coal theme was taken from the Prophet Isaiah (cf. 6: 6). It is the image of one of the seraphim who picks up a burning coal with tongs and simply touches the lips of the Prophet with it in order to purify them; the Christian, on the other hand, touches and consumes the Burning Coal which is Christ himself:

“The seraph could not bring himself to touch the glowing coal with his fingers, it was Isaiah’s mouth alone that it touched; neither did the fingers grasp it nor the mouth swallow it; but the Lord has granted us to do both these things.

“The fire came down with anger to destroy sinners, but the fire of grace descends on the bread and settles in it. Instead of the fire that destroyed man, we have consumed the fire in the bread and have been invigorated”

Here again is a final example of St Ephrem’s hymns, where he speaks of the pearl as a symbol of the riches and beauty of faith:

“I placed (the pearl), my brothers, on the palm of my hand, to be able to examine it. I began to look at it from one side and from the other: it looked the same from all sides. (Thus) is the search for the Son inscrutable, because it is all light. In its clarity I saw the Clear One who does not grow opaque; and in his purity, the great symbol of the Body of Our Lord, which is pure. In his indivisibility I saw the truth which is indivisible”