Pope will broadcast his morning Masses as a sign of his nearness to victims of Coronavirus; March 11 a day of fasting and prayer

Contents hide
1 Pope will broadcast his morning Masses as a sign of his nearness to victims of Coronavirus; March 11 a day of fasting and prayer
1.1 Praying with the Bishop of Rome

Pope Francis’ daily Mass from Casa Santa Marta will be livestreamed as of Monday, March 9. Pope Francis made this decision so as to be closer to those who are ill, in quarantine or, for whatever reason, unable to leave their homes.

Italy has enacted quarantine measures for as many as 16 million people, with anyone living in Lombardy and 14 other central and northern provinces needing special permission to travel.

The Italian government has also ordered the closure of all cinemas, museums and theaters.

The Italian bishops’ conference issued a statement on March 8, saying that the Italian government’s decree “suspends civil and religious ceremonies, including funeral ceremonies, throughout the country until Friday, 3 April.”

The Director of the Holy See Press Office, Matteo Bruni, said, when replying to questions from journalists, that “due to the risk of spreading the Covid-19 virus, the Holy Father has decided that the private Masses celebrated by him in the Casa Santa Marta be broadcast live in the coming days.”

As of Sunday evening, the number of deaths from COVID-19 in Italy had risen from 233 on Saturday to 366, officials have said. The total number of confirmed cases now stands at 7,375 – up from 5,883 on Saturday.

Thus, the Diocese of Rome has also suspended all public Masses, including funerals, until early April.

“Until the same date of April 3, the communal liturgical celebrations are suspended,” Cardinal Angelo De Donatis, vicar general of Rome, said in a statement March 8, citing an “awareness that protection from contagion requires even drastic measures, especially in interpersonal contact.”

Churches will stay open so that the faithful may pray at the tabernacle; priests will of course continue to celebrate Mass in private.

“The season of Lent helps us to live this great trial evangelically. I bless you by entrusting you all to Our Lady of Divine Love,” the vicar general said.

The diocese is encouraging Catholics in Rome to observe a day of fasting and prayer on March 11 for the victims of the virus.

Praying with the Bishop of Rome

The pope’s masses will be made available through the Vatican News portal, and distributed by Vatican Media to the media partners and to those media outlets who request it. Bruni concluded his message saying that in this way, “those who would like to follow these celebrations, praying in union with the Bishop of Rome” could do so.

Pope Francis initiated the daily Mass at the Casa Santa Marta at the start of his pontificate. Since then, thousands of the faithful, in small groups, have attended these Masses.

His homilies at this 7 a.m. Mass are always off the cuff and summarized by Vatican Radio.

Before now, Pope Francis never wanted his entire morning liturgy to be available through the media. A few weeks after Pope Francis’ election, Father Federico Lombardi, in his role as Director of the Holy See Press Office, explained why. “It is necessary to keep in mind the character the Holy Father himself attributed to the morning celebration of the Mass at Santa Marta,” he said. “It is a Mass with a group of the faithful present in which the pope wants to preserve a family character. Thus, notwithstanding the requests received, he has explicitly desired that they not be transmitted live in video or audio.”

In this case, Pope Francis has consented to the live broadcast of the morning liturgy in light of the emergency being experienced in these days, so as to be near to the families and to all those who are suffering. 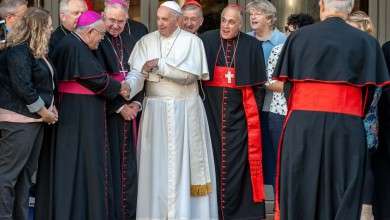 The Church could start admitting married men to the priesthood 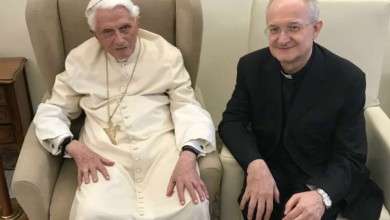