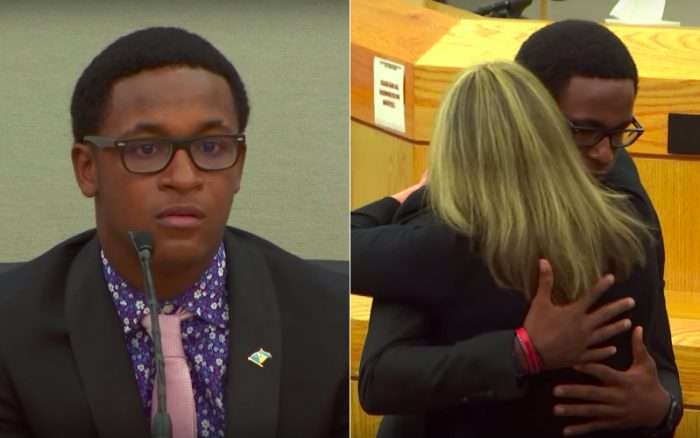 This is so moving!

Dallas County sentenced former Dallas police officer Amber Guyger to 10 years in prison for murder after she shot and killed 26-year-old Botham Jean in his own apartment.

Guyger said she “mistook Jean’s apartment as her own and thought he was a burglar. Guyger lived one floor directly below Jean. She was off duty, but still in her uniform when she shot Jean.”

The final verdict for the case occurred this week.

Listen to his statement below:

“I don’t want to say twice or the hundredth time…how much you’ve taken from us,” Brandt began. I think you know that. But I hope you go to God with all the guilt, all the bad things you’ve done in the past.”

“If you truly are sorry, I know, I can speak for myself–I forgive you, and I know if you go to God and ask him, he will forgive you.”

“I love you just like anyone else and I’m not going to say I hope you rot and die, just like my brother did. I, personally, want the best for you, and I wasn’t going to ever say this in front of my family or anyone, but I don’t even want you to go to jail.

“I want the best for you, because that’s exactly what Botham would want you to do. And the best would be to give your life to Christ.

“I’m not going to say anything else. I think giving your life to Christ would be the best thing that Botham would want you to do. Again, I love you as a person, and I don’t wish anything bad on you.”

Brandt then asks the judge if he could hug her. The two then embraced for at least a minute, and Guyger sobs.

Social media is exploding after this video surfaced. Multiple accounts say this is a true example of Christ’s forgiveness and love.

His full post reads, “Ye have heard that it hath been said, ‘Thou shalt love thy neighbor, and hate thine enemy.’
But I say unto you, Love your enemies, bless them that curse you, do good to them that hate you, and pray for them which despitefully use you, and persecute you.”

Actress Candace Cameron Bure also commented on the video. She said, “Only in Christ could you forgive like this.”

Her full post reads, “This. Young. Man. I can’t stop watching this. Only in Christ could you forgive like this. Brandt, the brother of Botham, who was murdered, speaking to the woman who was convicted of killing him. If this isn’t the perfect example of showing Christ’s love, forgiveness, grace, and mercy, I don’t know what is. Amen. An extra jewel on his crown.”

Let us pray for Brandt, his family, and the repose of his brother’s soul. Let us also pray for Amber Guyger.

Lord, have mercy on us!