A piece of the brain of St John Bosco has been stolen in Italy by a man apparently posing as a pilgrim.
The man entered the basilica of Castelnuovo on Saturday and took the glass reliquary containing part of the saint’s brain.
Archbishop Cesare Nosiglia of Turin decried the “profound moral misery of someone who would steal a ‘sign’ that’s been left and conserved for the devotion and the faith of all.”

“I invite who took it to give it back immediately, without conditions,” he added, “so we can turn this painful page and continue worthily to honour the memory of Don Bosco in his birthplace.”
St John Bosco was born in Castelnuovo in 1815 and is best known for founding the Silesian order. He also ministered to Turin’s street children, juvenile offenders and disadvantaged youth.
Police have set up roadblocks and are analysing video footage to try to catch the thief.
Fr Ezio Orsini, rector of the basilica, said: “We trust that Don Bosco can touch the heart of whomever committed this act and make them turn around, just as he was able to transform the lives of the young people he met.
“We’re also sure that while you can steal a reliquary of Don Bosco, as has happened, you can’t rob Don Bosco from us and from all the pilgrims who visit this place every day.” 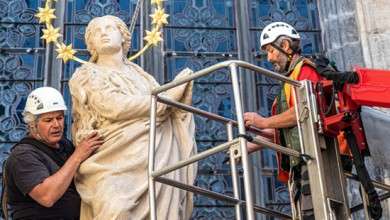 Statue of Mary once again overlooks city of Prague