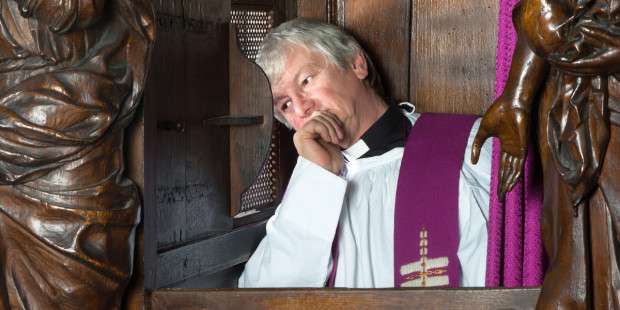 Can a non-Catholic go to confession to a priest?

Catholic Home » Q&A » Can a non-Catholic go to confession to a priest?

Interesting enough, many non-Catholics are intrigued by confession and are curious about whether they can receive the same graces as Catholics.

While confession is often looked at suspiciously by many non-Catholics, there exist a good number of non-Catholics who would like to go to confession. These non-Catholics are not actively engaged in an RCIA program and do not intend (in the near future) to become Catholic.

Besides the many graces received during confession, non-Catholics may be interested in the psychological benefits of telling someone else their sins and the relief they feel when hearing the words of absolution.

However, is it even permissible for a non-Catholic to get in the confessional line and kneel before a priest to receive the sacrament of reconciliation?

On almost all occasions, to receive confession licitly, one must be a professed member of the Catholic Church.

There are some cases where an Orthodox Christian can receive the sacrament of confession as well, since this branch of Christianity has valid sacraments.

Yet, the Code of Canon Law does list a few exceptions for baptized non-Catholics.

If the danger of death is present or if, in the judgment of the diocesan bishop or conference of bishops, some other grave necessity urges it, Catholic ministers administer these same sacraments licitly also to other Christians not having full communion with the Catholic Church, who cannot approach a minister of their own community and who seek such on their own accord, provided that they manifest Catholic faith in respect to these sacraments and are properly disposed. (Can.  844 §4.)

Basically, a Catholic priest can offer absolution to non-Catholic Christians in certain rare cases, such as the danger of death.

Non-Catholic Christians are certainly encouraged to seek out a Catholic priest for spiritual counseling, and can do so in the context of a scheduled meeting at the parish office. However, in most cases they should not approach a priest during a regularly scheduled time of confession in the church building. These times are reserved for members of the Catholic Church and do not allow the proper time for catechesis or extended personal advice.

Confession is a beautiful sacrament, one that can free a person from sin and set them on a new path. However, to fully embrace this gift one should be properly catechized and fully initiated in the Catholic Church.