Is there any Church Law that forbids me to make the Sign of the Cross like Eastern Catholics?

The sign of the cross is essentially always done in a particular manner in the Latin Church (up, down, left, right) and therefore the Latin Church does not have a need to put into the rubrics the exact manner the sign of the cross is to be performed.  However, some Eastern Catholic Churches have their own equally valid custom for the sign of the cross (up, down, right, left).
Throughout the centuries certain explanations were attached to the movements:  It is done with 3 fingers symbolizing the Trinity, or 2 fingers to symbolize the 2 natures of Christ.  Moving from top to bottom symbolizing the Incarnation.  Left to Right has said to symbolize Christ passing from the dead to the right hand of the Father.  Right to Left is said to symbolize the mission of Christ from the Jews to the Gentiles.
We should usually simply follow the the customs of the liturgy we are attending, of course decades of habit might make that impossible.  However if for whatever reason someone in the congregation found more meaning in using an Eastern Catholic custom of making the sign of the cross I don’t think its a big deal. 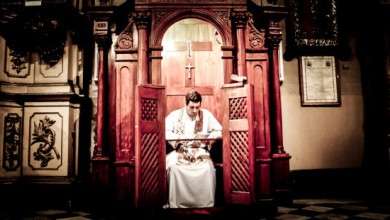 I have a serious sin to confess but have no access to a priest. What happens to me?

Is it required that the bodily remains or cremains be present at a Catholic funeral?