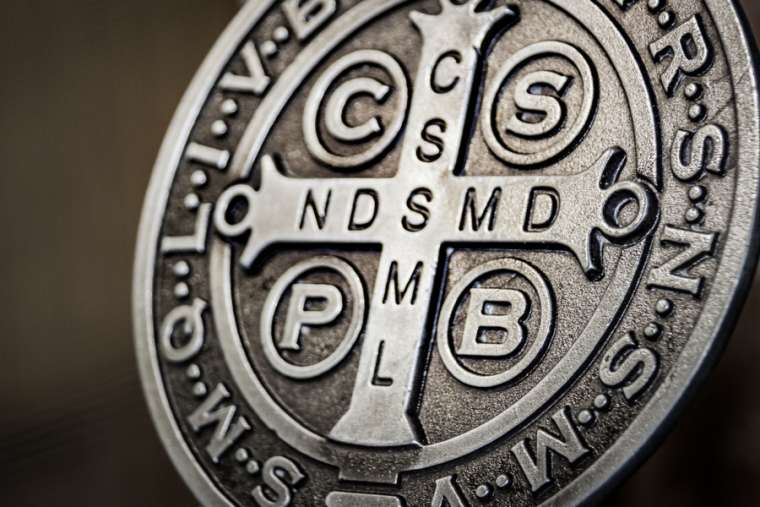 When the Blessed Virgin Mary appeared to the English Carmelite, St. Simon Stock, she carried the Carmelite scapular in her hand and told him: “This shall be the privilege for you and for all the Carmelites, that anyone dying in this garment shall be saved.”

Some 300 years later, by the 16th century, a smaller version of the Carmelite scapular, known today as the Brown Scapular, was made available to lay Catholics who underwent a small ceremony and blessing that enrolled them as a member of the Brown Scapular Confraternity.

But scapulars can be awkward under certain types of clothes or simply easy to forget in the morning. So, could a well-intentioned Catholic already enrolled in the Brown Scapular Confraternity get a tattoo of the image of the scapular on their skin and receive those same graces and promises?

The short answer is: no. But, you might not want to write off tattoos completely. There is a bit more to it than that.

“It seems the answer is quite simply, no,” Dr. Mikail Whitfield, a professor of theology at Benedictine College in Atchinson, Kansas, told CNA.

The reasons for this have to do with the way the Catholic Church defines sacramentals, and the nature of tattoos, he added.

According to the Catechism of the Catholic Church, sacramentals are “sacred signs which bear a resemblance to the sacraments. They signify effects, particularly of a spiritual nature, which are obtained through the intercession of the Church. By them men are disposed to receive the chief effect of the sacraments, and various occasions in life are rendered holy.”

The Catechism adds that sacramentals “do not confer the grace of the Holy Spirit in the way that the sacraments do, but by the Church’s prayer, they prepare us to receive grace and dispose us to cooperate with it.”

Sacramentals are not just objects, such as brown scapulars or Miraculous Medals, but the Catechism notes that blessings, of people, objects, meals and places, are primary among the sacramentals.

The Miraculous Medal is a sacramental inspired by the Marian apparition to St. Catherine Laboure in Paris in 1830. On one side it features an image of Mary, and on the other, a cross with an “M” underneath it, surrounded by 12 stars and the images of the Sacred Heart of Jesus and the Immaculate Heart of Mary.

Canon law defines sacramentals as “sacred signs by which effects, especially spiritual effects, are signified in some imitation of the sacraments and are obtained through the intercession of the Church” (Can 1166).

“Thus, for something to be a sacramental it needs to be a common object (or act) which can act as a sacred sign, which carries some imitation of the sacraments and is set aside by the Church as a means to seek grace,” Whitfield said.

The scapular, in its smaller form used by laypeople, imitates the full-length scapulars worn by members of religious orders, is a piece of wool clothing with is a common object, and imitates the vestments worn at baptism and by priests, Whitfield said.

Tattoos, on the other hand, lack many of these elements.

“While a tattoo is a thing, it is hard to consider it an object. It is more properly an image, though admittedly images can be sacred Furthermore, it is certainly not a ‘common object’ of daily life by which we can be reminded that all the things we do in this life, even the simplest things like wearing clothing, are supposed to be ordered towards our heavenly end,” Whitfield said.

Furthermore, he added, tattoos do not seem to imitate any other sacramental aspects of the Church, and they have not been set aside by the Church as sacramentals themselves.

In fact, the Catholic Church has not made any definitive statements on the morality, or lack thereof, of getting tattoos, and so answers to questions about tattoos vary widely among theologians and priests.

“I don’t think we can talk about tattoos as something good,” said Fr. Luis Granados, D.C.J.M, who serves as the J. Francis Cardinal Stafford Chair of Moral Theology at St. John Vianney theological seminary in Denver.

“They are not ‘intrinsically evil’ but they are wrong ways of treating our body,” he said, even if a tattoo is religious in its image or messaging.

“The problem of a tattoo is…we are misunderstanding the meaning of the body,” he said. “Our body is called to be accepted as a gift from God. We can heal what is sick, but we are called to accept our body, with its characteristics.”

Adornments of the body, such as makeup or nail polish, are different because they are not permanent changes to one’s body, Granados said.

“I think the question to understand why a tattoo is wrong, is: Why do I want to get a tattoo? Why do I want to spend this money and to some extent risk my health? My body has been wonderfully created by God (Psalm 139) and it does not need my additional words. It already speaks,” he said.

However, in some parts of the world, there are deeply rooted traditions of Christian tattoos. Some Coptic Christian churches require that Christians must have a tattoo of a cross on their arm in order to be admitted into their churches.

One Coptic Christian family has been tattooing pilgrims to the Holy Land with crosses and other religious symbols as a token of their visit for more than 700 years.

Seeing a priest or a religious sister or brother with tattoos may become a more common occurrence as well, because according to a 2015 Harris Poll, a whopping 47% of millennials reported that they have at least one tattoo.

Br. MJ Groark O.F.M. Cap., is one of those millennials, and is “heavily tattooed.”

“As a millennial (and soon to be priest), I can tell you that my tattoos have been generally met with overwhelming generosity. I have a heck of a conversion story, and these are part of it,” he told CNA.

“I can tell you that God is calling many men and women from this generation into ministry, and a whole bunch of us have tattoos. It’s part of our generation’s way of expressing our lives, and increasingly, our spiritual beliefs,” he said.

Groark said that considering what he learned in his moral theology training, he thinks the morality of a tattoo lies in its meaning.

“…the human person is created imago Dei (in the image of God). We are indeed temples of the Holy Spirit. And like the temples of old, and the temples we continue to worship at, we are somehow lured by the Catholic imagination to decorate and to magnify the beauty of our spaces,” he said.

“As long as a tattoo points towards the true, the good, and the beautiful, I’m okay with it. If it does not, then there would be a question of the morality.”

Father Ambrose Dobrozsi is another tattooed millennial priest in the Archdiocese of Cincinnati, Ohio. Dobrozsi told CNA that he did not think tattoos could not be considered sacramentals in the strict, proper sense of the word.

“Sacramentals, used well, keep us close to the grace of Christ given to us in the seven sacraments, and receive their graces by the authority that Christ gives his bride, the Church, when she asks for his help. When the Church asks Christ for graces, He never refuses his bride,” he said.

“This means that sacramentals only work when they are done according to the rules of the Church. If we want to ask Christ for these graces, we need to make sure we do so authentically as the Church, obediently accepting the rules she sets down. It’s clear in Canon Law that the Apostolic See alone has the authority to establish sacramentals and define the criteria for their use [c. 1167],” Dobrozsi said.

However, he added, it is possible that tattoos could be “sacramentals” in a broader sense of the word.

“A permanent image, engraved on the skin, could certainly serve as a constant, physical reminder of our new life in Christ. The image of a rosary, a cross, or other sacramental on our skin could lead us frequently to pray, to desire the seven sacraments more, and to think and act in communion with the Church,” he said.

“So, while a tattoo could not fulfill the requirements to be a proper sacramental in itself, if used in discernment and good faith it could certainly provide similar benefits and be helpful in the pursuit of holiness.”

Whitfield said that another reason that a tattoo would not be a proper scapular is because “an image is not the thing it images.”

“A picture of Michelangelo’s Pietà is not the same as seeing it in person. And standing in front of his sculpture pales in comparison to those who stood at the cross and saw Mary in person holding Christ’s lifeless body in her arms. The thing is always greater than the image. So, not only is a tattoo of the scapular not the scapular, but there’s some question of why it would be preferable; its an image of the thing, not the thing itself,” he said.

The Church already provides Catholics with an alternative to the traditional, woolen brown scapular through the wearing of a scapular medal, which was approved by the Church as a substitute for the scapular in 1910.

“Why? In certain tropical and subtropical areas of the world the use of a scapular had been identified as impractical. High levels of sweat would cause scapulars to break down and deteriorate at such a rate that they were hard to maintain,” Whitfield said.

Is it possible, then that the Catholic Church could extend through its authority the same graces and promises of the scapular to a tattoo of the scapular?

“Aside from the fact that as we’ve seen, tattoos do not seem to be of the nature to appropriately be a sacramental, I have a hard time seeing a practical purpose why such an extension should or would be made,” he said.

Part of the appeal of a scapular tattoo, as previously mentioned, is its permanence – someone with a scapular tattoo would not have to remember to put their scapular back on every morning when they got dressed.

But that remembrance is important, Whitfield said, and a one-time commitment “is not how the Christian life is lived.”

“Each and every day we recommit to the God whom we love. Even those who take permanent vows must choose to live them out each day. It is a daily struggle, and choosing to affirm that wearing the scapular is as important to me today as it was yesterday is part of the very commitment that one makes in putting it on,” he said.

Ultimately, Whitfield said, because God is all-powerful, he could decide to extend the graces of the scapular to someone with a scapular tattoo, but he is not bound to do so, as they are not the same as the sacraments of the Church.

“Sacramentals are reminders and holy practices which dispose us to grace, and through them we believe that God gives further graces by the will of his divine mercy,” Whitfield said.

“(God) has not bound himself to giving graces through sacramentals in the same way he has in the sacraments. So, might he be able to will to give the same graces to someone with a tattoo as someone who wears the scapular? He certainly could, but having the tattoo doesn’t mean he will.”