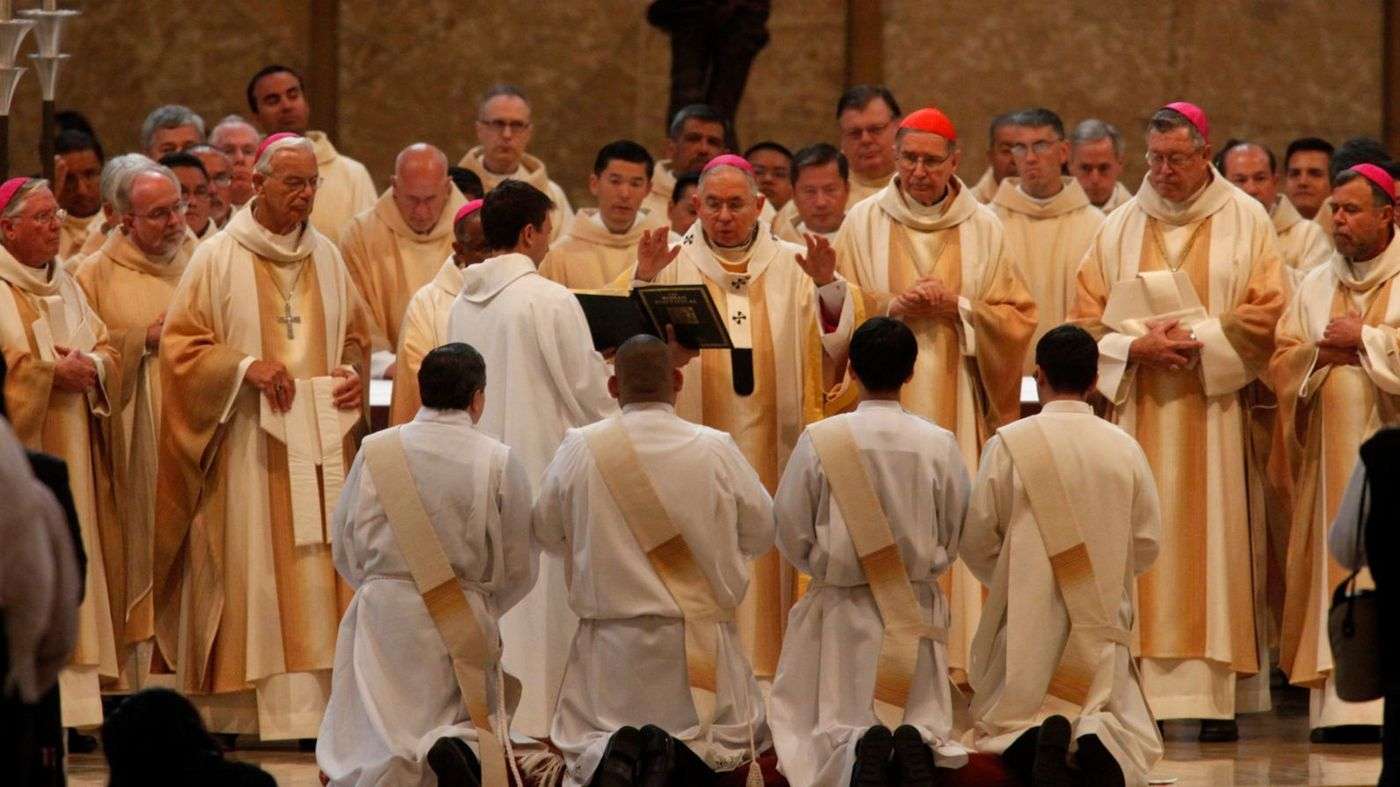 Catholic Home » Prayers » Q&A » Can women be ordained to the priesthood?

Can women be ordained to the priesthood? This is a question which provokes much debate in our modern world, but it is one to which the Church has always answered “No.” The basis for the Church’s teaching on ordination is found in the New Testament as well as in the writings of the Church Fathers.

While women could publicly pray and prophesy in church (1 Cor. 11:1–16), they could not teach or have authority over a man (1 Tim. 2:11–14), since these were two essential functions of the clergy. Nor could women publicly question or challenge the teaching of the clergy (1 Cor. 14:34–38).

The following quotations from the Church Fathers indicate that women do play an active role in the Church and that in the age of the Fathers there were orders of virgins, widows, and deaconesses, but that these women were not ordained.

The Fathers rejected women’s ordination, not because it was incompatible with Christian culture, but because it was incompatible with Christian faith. Thus, together with biblical declarations, the teaching of the Fathers on this issue formed the tradition of the Church that taught that priestly ordination was reserved to men. Throughout medieval times and even up until the present day, this teaching has not changed.

Further, in 1994 Pope John Paul II formally declared that the Church does not have the power to ordain women. He stated, “Although the teaching that priestly ordination is to be reserved to men alone has been preserved by the constant and universal tradition of the Church and firmly taught by the magisterium in its more recent documents, at the present time in some places it is nonetheless considered still open to debate, or the Church’s judgment that women are not to be admitted to ordination is considered to have a merely disciplinary force. Wherefore, in order that all doubt may be removed regarding a matter of great importance, a matter which pertains to the Church’s divine constitution itself, in virtue of my ministry of confirming the brethren (cf. Luke 22:32) I declare that the Church has no authority whatsoever to confer priestly ordination on women and that this judgment is to be definitively held by all the Church’s faithful” (OrdinatioSacerdotalis 4).

And in 1995 the Congregation for the Doctrine of the Faith, in conjunction with the pope, ruled that this teaching “requires definitive assent, since, founded on the written Word of God, and from the beginning constantly preserved and applied in the tradition of the Church, it has been set forth infallibly by the ordinary and universal magisterium (cf. Second Vatican Council, Dogmatic Constitution on the Church, Lumen Gentium 25:2)” (Response of Oct. 25, 1995).

The following quotations from the Fathers constitute a part of the tradition on which this infallible teaching rests.

“Pretending to consecrate cups mixed with wine, and protracting to great length the word of invocation, [Marcus the Gnostic heretic] contrives to give them a purple and reddish color. . . . [H]anding mixed cups to the women, he bids them consecrate these in his presence.

“When this has been done, he himself produces another cup of much larger size than that which the deluded woman has consecrated, and pouring from the smaller one consecrated by the woman into that which has been brought forward by himself, he at the same time pronounces these words: ‘May that Charis who is before all things and who transcends all knowledge and speech fill your inner man and multiply in you her own knowledge, by sowing the grain of mustard seed in you as in good soil.’

“Repeating certain other similar words, and thus goading on the wretched woman [to madness], he then appears a worker of wonders when the large cup is seen to have been filled out of the small one, so as even to overflow by what has been obtained from it. By accomplishing several other similar things, he has completely deceived many and drawn them away after him” (Against Heresies 1:13:2 [A.D. 189]).

“It is of no concern how diverse be their [the heretics’] views, so long as they conspire to erase the one truth. They are puffed up; all offer knowledge. Before they have finished as catechumens, how thoroughly learned they are! And the heretical women themselves, how shameless are they! They make bold to teach, to debate, to work exorcisms, to undertake cures . . . ” (Demurrer Against the Heretics 41:4–5 [A.D. 200]).

“[A female heretic], lately conversant in this quarter, has carried away a great number with her most venomous doctrine, making it her first aim to destroy baptism. . . . But we, little fishes, after the example of our Icthus [Greek, “Fish”], Jesus Christ, are born in water . . . so that most monstrous creature, who had no right to teach even sound doctrine, knew full well how to kill the little fishes, by taking them away from the water” (Baptism 1 [A.D. 203]).

“When a widow is to be appointed, she is not to be ordained, but is designated by being named [a widow]. . . . A widow is appointed by words alone, and is then associated with the other widows. Hands are not imposed on her, because she does not offer the oblation and she does not conduct the liturgy. Ordination is for the clergy because of the liturgy; but a widow is appointed for prayer, and prayer is the duty of all” (The Apostolic Tradition 11 [A.D. 215]).

“For it is not to teach that you women . . . are appointed. . . . For he, God the Lord, Jesus Christ our Teacher, sent us, the twelve [apostles], out to teach the [chosen] people and the pagans. But there were female disciples among us: Mary of Magdala, Mary the daughter of Jacob, and the other Mary; he did not, however, send them out with us to teach the people. For, if it had been necessary that women should teach, then our Teacher would have directed them to instruct along with us” (Didascalia 3:6:1–2 [A.D. 225]).

“[T]here suddenly arose among us a certain woman, who in a state of ecstasy announced herself as a prophetess and acted as if filled with the Holy Ghost. . . . Through the deceptions and illusions of the demon, this woman had previously set about deluding believers in a variety of ways. Among the means by which she had deluded many was daring to pretend that, through proper invocation, she consecrated bread and performed the Eucharist. She offered up the sacrifice to the Lord in a liturgical act that corresponds to the usual rites, and she baptized many, all the while misusing the customary and legitimate wording of the [baptismal] question. She carried all these things out in such a manner that nothing seemed to deviate from the norms of the Church” (collected in Cyprian’s Letters 74:10 [A.D. 253]).

“Similarly, in regard to the deaconesses, as with all who are enrolled in the register, the same procedure is to be observed. We have made mention of the deaconesses, who have been enrolled in this position, although, not having been in any way ordained, they are certainly to be numbered among the laity” (Canon 19 [A.D. 325]).

“Certain women there in Arabia [the Collyridians] … In an unlawful and b.asphemous ceremony … ordain women, through whom they offer up the sacrifice in the name of Mary. This means that the entire proceeding is godless and sacrilegious, a perversion of the message of the Holy Spirit; in fact, the whole thing is diabolical and a teaching of the impure spirit” (Against Heresies 78:13 [A.D. 377]).

“It is true that in the Church there is an order of deaconesses, but not for being a priestess, nor for any kind of work of administration, but for the sake of the dignity of the female sex, either at the time of baptism or of examining the sick or suffering, so that the naked body of a female may not be seen by men administering sacred rites, but by the deaconess” (ibid.).

“From this bishop [James the Just] and the just-named apostles, the succession of bishops and presbyters [priests] in the house of God have been established. Never was a woman called to these. . . . According to the evidence of Scripture, there were, to be sure, the four daughters of the evangelist Philip, who engaged in prophecy, but they were not priestesses” (ibid.).

“If women were to be charged by God with entering the priesthood or with assuming ecclesiastical office, then in the New Covenant it would have devolved upon no one more than Mary to fulfill a priestly function. She was invested with so great an honor as to be allowed to provide a dwelling in her womb for the heavenly God and King of all things, the Son of God. . . . But he did not find this [the conferring of priesthood on her] good” (ibid., 79:3).

“[W]hen one is required to preside over the Church and to be entrusted with the care of so many souls, the whole female sex must retire before the magnitude of the task, and the majority of men also, and we must bring forward those who to a large extent surpass all others and soar as much above them in excellence of spirit as Saul overtopped the whole Hebrew nation in bodily stature” (The Priesthood 2:2 [A.D. 387]).

“A virgin is not ordained, for we have no such command from the Lord, for this is a state of voluntary trial, not for the reproach of marriage, but on account of leisure for piety” (Apostolic Constitutions 8:24 [A.D. 400]).

“Appoint, [O Bishop], a deaconess, faithful and holy, for the ministering of women. For sometimes it is not possible to send a deacon into certain houses of women, because of unbelievers. Send a deaconess, because of the thoughts of the petty. A deaconess is of use to us also in many other situations. First of all, in the baptizing of women, a deacon will touch only their forehead with the holy oil, and afterwards the female deacon herself anoints them” (ibid., 3:16).

“[T]he ‘man is the head of the woman’ [1 Cor. 11:3], and he is originally ordained for the priesthood; it is not just to abrogate the order of the creation and leave the first to come to the last part of the body. For the woman is the body of the man, taken from his side and subject to him, from whom she was separated for the procreation of children. For he says, ‘He shall rule over you’ [Gen. 3:16]. For the first part of the woman is the man, as being her head. But if in the foregoing constitutions we have not permitted them [women] to teach, how will any one allow them, contrary to nature, to perform the office of the priest? For this is one of the ignorant practices of Gentile atheism, to ordain women priests to the female deities, not one of the constitutions of Christ” (ibid., 3:9).

“A widow is not ordained; yet if she has lost her husband a great while and has lived soberly and unblamably and has taken extraordinary care of her family, as Judith and Anna—those women of great reputation—let her be chosen into the order of widows” (ibid., 8:25).

“A deaconess does not bless, but neither does she perform anything else that is done by presbyters [priests] and deacons, but she guards the doors and greatly assists the presbyters, for the sake of decorum, when they are baptizing women” (ibid., 8:28).

“[The Quintillians are heretics who] give women predominance so that these, too, can be honored with the priesthood among them. They say, namely, that Christ revealed himself . . . to Quintilla and Priscilla [two Montanist prophetesses] in the form of a woman” (Heresies 1:17 [A.D. 428]).