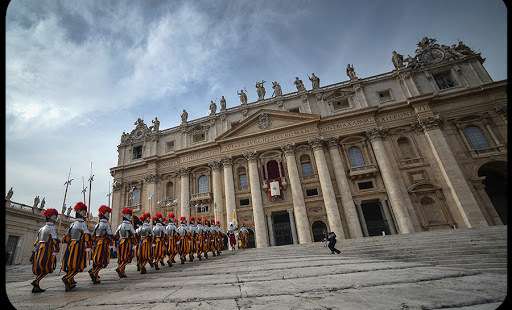 Can the Swiss Guard Protect Rome?

The history of the guards of God’s kingdom

Will ISIS attack Rome? Some commentators believe the threat from the Libyan jihadists does not refer specifically to Rome, but opine that “Rome” is a shorthand for “the Christian West” while others believe by “Rome” the ISIS barbarians mean Istanbul, Turkey — the Rome of the East. Whether the ISIS rebels in Libya are planning an attack on Rome or not, the Swiss Guard are ready to defend the Holy Father. The Swiss Guard, in their colorful Renaissance period uniforms offer more than ornamentation. Throughout the Middle Ages the Swiss were known as the most efficient and effective mercenaries and the courts of many noblemen and monarchs boasted a regiment of Swiss Guards. The Pontifical Swiss Guard of the Holy See are what remains of a once proud and widespread military tradition.

The Swiss Guards at the Vatican must be single Catholic men between the ages of 19 and 30 with Swiss citizenship. They must have a professional degree or high school diploma, good recommendations, and they must have completed basic training with the Swiss military.  After the 1981 assassination attempt on Pope John Paul II, the Swiss Guard strengthened their role and updated their skills and weaponry. The men now have advanced training in unarmed combat and small arms. In addition to their sword and halberd they are armed with machine pistols, submachine guns and sniper rifles. In a recent interview Christoph Graf, commander of the Swiss Guard said they were ready to help defend the Pope in case of an attack, “We have asked the guards to be on higher alert, to watch how people are moving. We can’t do more than that,”  The Swiss Guard are teamed with the other Vatican security forces, the Gendarmerie of the Vatican City.

Without the tradition, halberds and the Renaissance uniforms, the gendarmerie are a more ordinary police force for the Vatican City. They are in charge of border control, traffic management, criminal investigations and are equipped with modern weapons and equipment for crowd control in case of a riot. While the Swiss Guards act as personal papal bodyguards and the Gendarmerie perform typical police functions for the Vatican City state, the Vatican and the Holy Father are also protected by Italian security forces, international intelligence agencies and the Italian military. While the madmen of ISIS rattle their sabers and talk big it is unlikely that they could launch a major attack on Rome. However, a lone suicide bomber could wreak havoc at a public papal audience and defending a pope who loves to be out with the people is a constant security challenge. If Rome were attacked it wouldn’t be the first time. In 410 Alaric I led the Visigoths as they sacked Rome, and in 452 Pope Leo the Great turned back an attack on Rome when he met Attilla the Hun. Nevertheless the Vandals attacked a few years later, and a hundred years after the Vandals sacked Rome the Gothic king Totila descended like a wolf on the fold.

In 1527 the mutinous troops of Holy Roman Emperor Charles V ravaged the city causing Pope Clement VII to run for his life. All but forty-two of the Swiss Guards were slain, the remaining fled with the pope down the secret passage that connects the Vatican to the Castel Sant Angelo. The day was May 6, 1527 and to mark the heroism of the Swiss Guard that is still the day each year when new Swiss Guards are sworn in. In 1798 Napoleon’s troops marched into Rome and took Pope Pius VI prisoner, and in 1870 Rome was captured to become part of the united Italy under King Victor Emmanuel. In 1922 Mussolini’s fascist party marched on Rome to consolidate their power in Italy. Being aware of history is to be aware of God’s working within the machinations of man. The city of Rome and the Roman pontiff have been caught up in the maelstrom of war, the violence of invasion and the turmoil of political upheavals and revolution from the beginning. One of the signs of the divine inspiration of the church is that despite persecutions from without and corruption from within Satan has not been able to prevail against her. Dictators, monarchs, ideologies and systems have come and gone, but the papacy and the city of Rome remain.