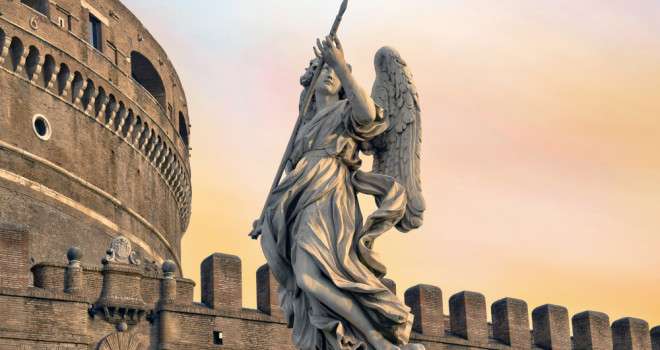 Q: With all of the talk about angels, the multitude of pictures and books about them, and even the television shows with angels, why don’t we ever hear more about them? Some of these shows make angels seem like fantasy spirits. Too many people have a superficial view of angels. Do we still believe in them?

The Catechism of the Catholic Church clearly affirms, “The existence of the spiritual, non-corporeal beings that sacred Scripture usually calls ‘angels’ is a truth of faith. The witness of Scripture is as clear as the unanimity of Tradition” (no. 328). Given that we do believe in angels, we define them as pure spirits and personal beings with intelligence and free will. They are immortal beings. As the Bible attests, they appear to humans as apparitions with a human form.

Since the fourth century, nine choirs or types of angels are identified in the Bible and have been elaborated upon by various theologians: The first three choirs see and adore God directly. The seraphim, which means “the burning ones,” have the most intense “flaming” love for God and comprehend Him with the greatest clarity. (Interestingly, Lucifer, which means “light bearer,” was one of the seraphim whose beautiful light was changed into darkness.) The cherubim, which means “fullness of wisdom,” contemplate God’s divine providence and plan for His creatures. Lastly, the thrones, symbolizing divine justice and judicial power, contemplate God’s power and justice.

The next three choirs fulfill God’s providential plan for the universe: The dominations or dominions, whose name evokes authority, govern the lesser choirs of angels. The virtues, whose name originally suggested power or strength, implement the orders from the dominations and govern the heavenly bodies. Lastly, the powers confront and fight against any evil forces opposed to God’s providential plan.

The last three choirs are directly involved in human affairs: The principalities care for earthly principalities, such as nations or cities. The archangels deliver God’s most important messages to mankind, while each angel serves as a guardian for each of us. Although not official dogma, this schema became popular in the Middle Ages in the writings of St. Thomas Aquinas, Dante, Hildegard of Bingen and John Scotus Erigina.

Nevertheless, we believe that Almighty God created the angels before the rest of creation. At some point, some angels, led by Lucifer, rebelled against God. These angels made a free choice, radically and irrevocably rejecting God and His rule. Therefore, they were cast into Hell. This event is mentioned, albeit briefly, in several passages of the New Testament: St. Peter wrote, “Did God spare even the angels who sinned? He did not! He held them captive in Tartarus [Hell] — consigned them to pits of darkness, to be guarded until judgment” (1 Pt 2:3). In the Letter of St. Jude we read, “There were angels, too, who did not keep to their own domain, who deserted their dwelling place. These the Lord has kept in perpetual bondage, shrouded in murky darkness against the judgment of the great day. Sodom, Gomorrah and the towns thereabouts indulged in lust, just as those angels did; they practiced unnatural vice. They are set before us to dissuade us, as they undergo a punishment of eternal fire” (Jude 6-7). When Jesus spoke of the Last Judgment and the need to serve the least of our brethren, He said to the unrighteous, “Out of my sight, you condemned, into that everlasting fire prepared for the devil and his angels” (Mt 25:41). Always remember that these fallen angels — the devil and demons — had been created good, but by their own free will chose to sin and turn away from God.

A key to understanding angels is by looking at what they do. First, angels see, praise and worship God in His divine presence. Jesus said, “See that you never despise one of these little ones. I assure you, their angels in Heaven constantly behold my heavenly Father’s face” (Mt 18:10), a passage which also indicates that each of us has a guardian angel. The Book of Revelation described how the angels surround the throne of God and sing praises (cf Rv 5:11ff, 7:11ff). Moreover, they rejoice over the saved soul of the repentant sinner (Lk 15:10).

Second, “angel” comes from the Greek “angelos” which means “messenger,” which describes their role in interacting with this world. St. Augustine stated that angels were “the mighty ones who do His word, hearkening to the voice of His word.” Throughout sacred Scripture, the angels served as messengers of God, whether delivering an actual message of God’s plan of salvation, rendering justice, or providing strength and comfort. Here are a few examples of their role as messengers in the Old Testament: After the Fall of Adam and Eve and their expulsion, the cherubim guarded the entrance to the Garden of Eden (Gen 3:24). Angels protected Lot and his family in Sodom and Gomorrah (Gn 19). The angel stopped Abraham as he was about to offer Isaac in sacrifice (Gn 22). An angel guarded the people on the way to the Promised Land (Ex 23:20). In the New Testament, an angel appeared to the centurion Cornelius and prompted his conversion (Acts 10:1ff); and an angel freed St. Peter from prison (Acts 12:1ff). In all, Hebrews 1:14 captured their role well: “Are they not all ministering spirits, sent to serve those who are to inherit salvation?”

Next week we will focus on archangels and guardian angels.