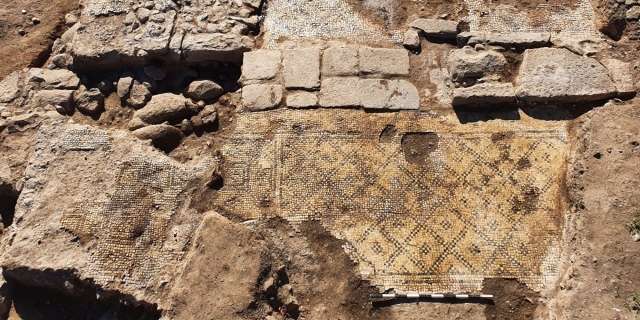 The Israel Antiquities Authority announced on Wednesday that the inscription was engraved at the entrance of a building from the Byzantine or early Islamic period.

As Jesus was about to enter Jerusalem, days before his crucifixion, crowds hailed his arrival, crying out, “Blessed is the king who comes in the name of the Lord.”

Some Pharisees on hand didn’t like that and asked him, “Rebuke your disciples.”

To which Jesus responded, “I tell you, if they keep silent, the stones will cry out!”

Some 2,000 years later, a stone was unearthed in Taiba, in northern Israel, that indeed seems to cry out. Unveiled this week, it contains the Greek inscription, “Christ, born of Mary.”

The Israel Antiquities Authority announced on Wednesday that the inscription was engraved at the entrance of a building from the Byzantine or early Islamic period. The stone was discovered in a secondary use in an ornately decorated building.

“The importance of the inscription is that until now we didn’t know for certain that there were churches from this period in this area,” Israel Antiquities Authority archaeologist Walid Atrash told the Times of Israel.

“There are many signs of ancient Christian life in the region — the Jezreel Valley — but this is the first evidence of the Byzantine Church’s existence in the village of Taiba, Atrash told the Jerusalem Post.

Taiba itself was a Christian village in the Byzantine period and later became the site of a Crusader fortress.

“The modern Arab village grew around it, and some remains are still visible,” said Antiquities Authority archaeologist Yardenna Alexandre.

“Christ born of Mary. This work of the most God-fearing and pious bishop [Theodo]sius and the miserable Th[omas] was built from the foundation. Whoever enters should pray for them.”

“The inscription greets those who enter and blesses them. It is therefore clear that the building is a church, and not a monastery,” Leah Di Segni, researcher at the Institute of Archaeology of the Hebrew University of Jerusalem, said in a press release. She said that churches, unlike monasteries in those times, greeted visitors at the entrance.

Finding the name of Theodosius, archbishop of the metropolis of Beit She’an to which Taiba belonged in the 5th century, helped archaeologists date the stone.

The Times added that there is a large blank circular area on the stone, where Atrash said a large cross once was engraved. He believes the cross was intentionally defaced — by Christians or Jews who lived in the area — prior to the stone’s recycled use in the wall of the later building.

“The inscription, he said, faced inside the wall and would not have been visible,” explained the Times. “The building was constructed prior to the advent of Islam, but was still in use during the Muslim period.” The Times added:

Another explanation for the removal of the cross, said Atrash, is that the original church, falling into disuse at the end of the Byzantine empire, was destroyed in one of the several earthquakes that hit the region during this time. The stone may have been damaged and then reused by the Christians or Jews who constructed the subsequent two-room structure, adorned by geometric mosaic flooring, that was recently excavated by a mix of students, volunteers and workers from the local community.

The Post said that the words “Christ born of Mary” were widely used at the beginning of documents or other forms of text, serving as a blessing and protection from evil.

“As a blessing, the inscription must have originally stood at the entrance of the church, where people could see it,” said Alexandre. “However, it was now found incorporated in the walls, therefore we know that the stone was reused as construction material. Likely the building collapsed and was rebuilt.”

Articles People and History No Comments