The Church of the Holy Sepulchre was closed last week and has no definite timeline for reopening. This is the first time in nearly 700 years the holy site has closed for an extended period due to disease.

The church building, which houses the tomb of Christ and the site of the crucifixion, was first closed to pilgrims and other visitors on Wednesday, March 25. Initially, the closure was only expected to last for one week, but religious and Israeli government officials agreed that due to the ongoing COVID-19 pandemic, the global pilgrimage destination should not reopen.

“The initial understanding is that this order is valid for one week, although nobody knows how long this crisis will take,” Wadie Abu Nassar, a spokesperson for the Assembly of Catholic Ordinaries of the Holy Land, told Reuters.

Nassar said that if the church is still closed to the public at Easter, some sort of celebration will be arranged in line with the governmental guidelines and restrictions. Easter is celebrated on April 12 for Latin Rite Catholics and April 19 for Eastern Churches using the Julian calendar– both dates are observed within the Church of the Holy Sepulchre.

If this were to happen, said Nassar, pilgrims would still not be allowed inside, and the denominations that share custody of the church would coordinate to ensure that there are no more than 10 clerics and other leaders gathered inside at any time.

The Church of the Holy Sepulchre is unique among religious sites as it is partially controlled by several different Christian Churches. The Roman Catholic Church, Greek Orthodox Church, and Armenian Apostolic Church each share control of the building, and other Orthodox Churches also celebrate divine liturgy at the site.

The last time the Church of the Holy Sepulchre was closed for an extended period was 1349, during an outbreak of the Black Death in Jerusalem.

The church, which was first consecrated in the year 335, has been closed for short periods of time in the subsequent millennia due to war or other disputes. In 2018, to protest a proposed tax increase on churches, the site was closed to the public for about three days before reopening.

Other religious sites, including the Western Wall and the Dome of the Rock, have also closed due to the Israeli government’s new restrictions aimed at preventing people from catching COVID-19.

Israel has taken a proactive approach in its attempts to contain the spread of COVID-19. On March 9, Prime Minister Benjamin Netanyahu announced that anyone entering the country would be forced to quarantine for a 14-day period. That announcement resulted in the cancelation or abrupt end to many pilgrimages, as travelers scrambled to secure flights back to the United States.

Vatican: Ashes must not be scattered or kept at home 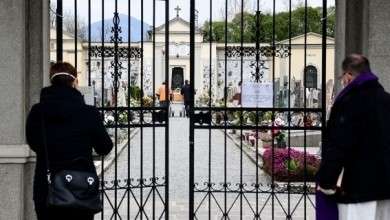