Christian songwriters Bill and Gloria Gaither produced the song in 1965.

Some truly special prayers have been used as the lyrical basis for some beautiful songs. Consider “Take, Lord, Receive,” the prayer by St. Ignatius Loyola (called the Suscipe Prayer), and the song by Father John Foley S.J. And the Lord’s Prayer has been put to music several times, most notably by composer Albert Hay Malotte.

But prayer can go in the other direction. A song can have original lyrics that could stand alone as a truly inspirational prayer. One of my favorites: “Come, Holy Spirit,” written by married couple Gloria and Bill Gaither.

The Gaithers, members of the Church of the Nazarene, are among the most influential and indeed famous figures in contemporary Christian music and have won multiple Grammy and Dove awards. Bill first formed the Bill Gaither Trio, with his sister and brother, while a college student in the 1950s. He met Gloria some years later when both were high school teachers in Indiana. They eventually married and plunged full-time into Christian music.

Gloria served for a time as a vocalist in the Trio, but they have spent most of their careers together collaborating as writers – generally with Gloria penning the lyrics and Bill composing the music. As of 2012, they had written more than 700 songs.

Come as a wisdom to children
Come as new sight to the blind
Come, Lord, as strength to my weakness
Take me soul, body and mind
Come as a rest to the weary
Come as a balm to the sore
Come as a dew to my dryness
Fill me with joy evermore

Come like a spring in the desert
Come to the withered of soul
O, let your sweet healing power
Touch me and make me whole

The lyrics clearly can be recited in a holy moment of prayer, but it’s also a pretty great song. Here is a prayerful version by singer Bryan Duncan: 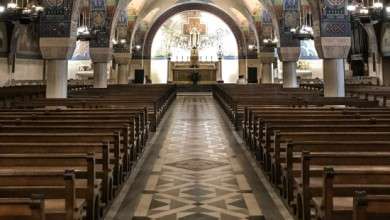 This is why church pews were invented

Catholic: What It Means, Past, Present, Future