A friend of mine was famous for saying, “Watch out! You’re in deeper than you think.” When have you fallen away from the Church? How deep is more profound than you think? My answer now is one mortal sin. I was away from the Church for 37 years — too many serious sins to count. [I was] in so deep, and I had no idea I was in at all. [I thought] everything between God and me was terrific because, after all, I am a good person. This is how confession set me free.

Contents hide
1 I Start to Slip
2 God, Please Make Me Well!
3 Jesus Calls Me Back
4 Closer to Jesus
5 Read More

I Start to Slip

How did the fall start? I do not remember the moment. Most likely, I was too lazy to get out of bed one summer morning. I remember thinking that a vacation from school could also be a vacation from Church. I know I gave no thought to how much I was hurting God. And I remember saying to myself; confession will fix everything.

What began that summer continued every summer until I went to college. If I didn’t feel like getting out of bed on Sunday, it was vacation, so I didn’t go to Mass. At college, I gradually stopped going to Mass at other times of the year, then just about all together. Over the years, my fall ranged from gradual to plunges and deep dives. I became my own pick-and-choose lapsed Catholic. That is, I prayed and talked to God every day; I went to Mass some of the time. And throughout my life, the years added up to 37 since my last confession, since I attended Mass regularly, and since I received Holy Communion. I was a far cry from the eager kid I had been preparing for my First Holy Communion.

As the day of my First Communion approached, I was six years old and in bed, having fallen ill the week before. I had passed my catechism test and was all set to receive it with my class. Dress and veil were hanging in the closet. New shoes were in their box. My heart was eager for the day. For me to miss receiving Holy Communion with my class was the worst thing that could happen. If I did not feel well enough to get out of bed on the day of First Holy Communion, I would have to wait another year. Imagine a full year of missed Holy Communions!

Somehow confessing in my pajamas in my bedroom did not feel as holy to me. But my mother and the Monsignor assured me that this was the real deal. This was a very special blessing from God, they said. During the confession and after, I remember feeling full of hope that a miracle would happen to make me well. Sure enough, when Saturday morning came, I was fit as a fiddle. Mom gussied me up in dress, veil, and shoes, and off we went to Church. God gave me the grace to receive my first Holy Communion with my class.

After Mass, back in my bedroom, Mom took off my finery. There were scars all over: chickenpox. By the time the rest of our family and friends arrived a few hours later for the party, the pox had spread to every inch of my body. They confined me to bed. Music, laughter, joy, and the merriment of the party filled up the house. Everyone had a grand old time while I itched and scratched.

The sad thing was, I did not think to spend my time visiting and talking to Jesus. Nor did I take the next step, which was to offer up my tribulations as a sacrifice. I started to do in bed and continued to do for the next few years to pray to God that I would not be sick for my confirmation. Those prayers worked, for I was perfectly healthy up to and on that day. But, not until recently—a lifetime later—have I come to appreciate God’s special blessings of my first confession in bed and the miracle of enough wellness to receive Holy Communion with my class. Little did I know on that precious First Communion day that in a few years, my slip-slide was to begin.

Jesus Calls Me Back

What was it that brought me back to the Church? It was my aunt’s death. My mother died when I was 21. Aunt Em, her sister, then became more than a mother to me. I’ve had Masses said for Auntie at St. Patrick’s Cathedral in New York each year since her death. Every year for five years, I went to the Mass but did not receive Holy Communion. A friend always asked, “Why don’t you receive?” And each year, my answer was the same, “What’s the sense of going to confession when you know you’re going to sin again?”

Then, one day while I was standing at the kitchen sink washing dishes, the Lord asked me: Why not today? He was prodding me to rush to St. Patrick’s and make my confession before Mass for Auntie began.
The desire to receive Holy Communion was the focus of my heart. Still, the lingering bad habits of the years clung to me. Armed with false bravado, I said to myself, “If the priest does not treat me right, I’ll walk out of the confessional”—the devil’s words. Lucky for me, God’s grace is more merciful and compassionate than my deafness, blindness, and stupidity. I did make it to the Cathedral in time, and the line for confession was not long.

All the while, I thought of my list of sins. How will I phrase this, and don’t let me forget that, and oh, I’ll have to spit that out? I reworked the list, kept doing my examination of conscience, and tried to be honest. I was so busy that I did not get as nervous as I expected. Once inside the confessional, everything was familiar to me. Like riding a bicycle, I had not forgotten how to do it.
So I began. I made the sign of the cross and said, “Bless me, Father, for I have sinned. It’s been 37 years since my last confession.”

And the priest said, “Thank God you came in here today!” Right away, I knew this priest was the right one for me. He was glad I was here. He spoke with a lilting brogue that was comforting and warm. The priest became, for me, the most wonderful gift from God.

“Thirty-seven years, you made my day! I’m going to make this easy. I’ll go down the list and say the sins, and you’ll answer yes or no. If you committed the sin just once, answer yes,” he said.
He took a load off my shoulders. I thought I might be kneeling in St. Patrick’s for years. But I had a confessor who knew sinners and sins. Down the list he went, listing sins I could identify. And down the list, I answered. We did it as easily as he promised.

Then he said, “That’s your ten commandments. For your penance, say one Our Father, any time.” I was elated. He had given me my favorite prayer.

“You have suffered enough,” he said. “For now, you will say an Act of Contrition. Do you know it?”
We began the words together, and I continued alone. Then he gave me absolution and set me free.
Before I left, he said with a little chuckle, “Don’t stay away another 37 years.”

I said my penance at a side altar, and then I floated up the center aisle to the main altar. A soloist happened to be singing Alleluia.
What is it like to receive the Lord after so long a time? My instantaneous response—as soon as the Lord rested on my tongue—was the exclamation in my head: God, you taste great!

Now I am a lector at our Church. Here the pulpit is grand, ornate, and architecturally impressive. Many famous homilists have spoken there, which for me was daunting at first. It made me weak in the knees to think Archbishop Fulton J. Sheen had climbed those steps, and now I was climbing them too.

We also have a podium, which stands opposite the pulpit. Made of wood, it is closer to the altar and tabernacle. At a recent Mass, I used the pulpit. Sitting so close to the tabernacle, I felt blessed and at peace. I thought about others who have yet to come back to Jesus or to know Jesus for the first time. True, it is never too late, but sooner rather than later makes better use of God’s grace. The nearness of the tabernacle made me realize, even more, how every inch closer to Jesus is a place that much better to be.

After going to confession, pray this powerful prayer

A Prayer After Confession by St. Frances Xavier Cabrini 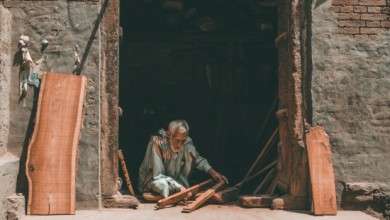 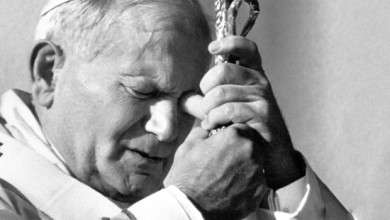