Churches in the U.S. continue to watch outbreak, but maintain flu-level precautions.

Catholics traveling for pilgrimage and education, as well as those attending Masses and other services in their local parishes, have had to make a number of adjustments because of the coronavirus disease COVID-19.

At the Lourdes shrine in France, the pools of water in which sick pilgrims normally bathe are temporarily closed in response to the outbreak of COVID-19 in parts of Europe and many other parts of the world. The shrine announced that pilgrims are still welcome, however.

A man who went on a trip to Europe organized by a Catholic school in Rhode Island has been hospitalized for COVID-19, the Associated Press reported.  A teenage girl on the trip also tested positive, and a woman on the trip is being tested.

St. Raphael Academy in Pawtucket, Rhode Island, is closed while it is being sanitized. The school, located on the Massachusetts border, posted a statement online Sunday that said students and chaperones who were on the trip will be out of school until March 9. The state’s Department of Health said in a statement that all 38 of the people who went on the trip will be self-monitoring for symptoms at home for 14 days with public health supervision. “They have been instructed to not go to school or work and to remain at home for these 14 days,” the statement said.

A staff member in the Vatican was quarantined Monday on suspicion of infection, and several Catholic universities in the United States have called home students who are studying abroad. Duquesne University canceled a planned spring break trip to Italy and advised the 59 students at its Rome campus to return home. The school took the action after Italy reached level three of the Centers for Disease Control and Prevention’s risk factor chart, Crux reported:

In a statement, Loyola said “students re-entering the U.S. are required to stay in place at home for a 14-day observation period.”

Churches in the United States were continuing to watch the news but not implementing many more precautions than they already had in place for the flu season. The Diocese of Trenton, New Jersey, on Friday issued a statement saying the diocese has “always advised the faithful that sickness is a valid reason not to attend Mass or other church gatherings where large groups assemble. At Mass, no member of the faithful is obliged: (1) to shake hands at the sign of peace; (2) to receive the Precious Blood of Christ from the chalice; (3) to receive the Body of Christ on the tongue unless that is his/her preference.”

In a February 27 statement, Sr. Rosanne Belpedio of the Archdiocese of Los Angeles Office of Worship said there would not be any restrictions on celebration of the Mass at this time. “However, we encourage the exercise of vigilance and discretion at the local level,” Sr. Belpedio said. “The flu season offers the opportunity to renew our ritual practice and teach the faithful about the use of common sense in the customs of holding hands during the Lord’s Prayer, sharing the sign of peace, and sharing from the chalice. The current situation presents an opportunity to implement the Orans position during the recitation of the Lord’s prayer. Explaining that during the recitation of the Lord’s Prayer in the early church the posture was to raise one’s eyes and hands toward heaven in acknowledgement of our sole reliance on God. At the sign of peace, a simple nod and speaking the words, ‘Peace be with you,’ would be appropriate.”

In South Korea, an unprecedented number of churches were closed Sunday in response to the escalating outbreak there.

“This is the first time that churches are officially postponing services in the 100 years of Protestant history and 200 years of Catholic history [in Korea],” Won Jae-chun, a professor at Christian Handong Global University in Pohang, told Christianity Today. “Services and Masses have not stopped—even during the Korean War.”

By Monday, there were almost than 89,000 cases of COVID-19 and over 3,000 deaths reported worldwide, including six in Washington State. Six new countries — Armenia, Czechia, Dominican Republic, Luxembourg, Iceland, and Indonesia — reported their first cases. 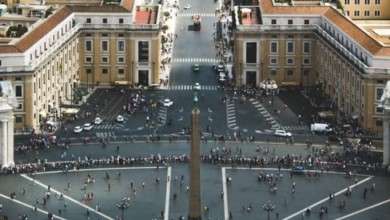