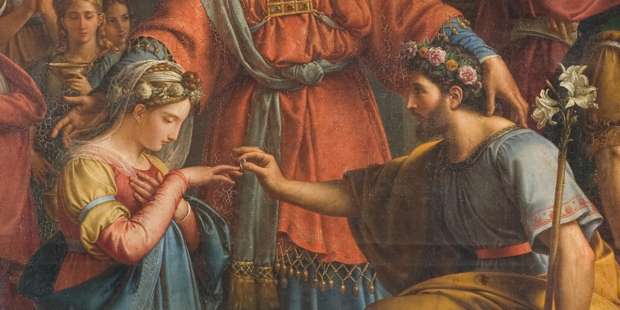 Home » Q&A » Could this be the Virgin Mary’s wedding ring?

According to local traditions, this church in Italy holds a ring that many claim belonged to the Virgin Mary.

Wedding rings have an ancient history and are typically linked to traditions in Judaism, Rome and even Babylon. While each of these traditions were developed for various reasons, it points to the likely possibility that St. Joseph gave the Virgin Mary a ring at their betrothal.

This is a small detail that isn’t mentioned in scripture, as most local traditions are typically omitted from the New Testament since the original readers would have been familiar with these customs.

Whatever may have been the case, a miraculous ring surfaced in Italy during the 15th century. Legend claims that a goldsmith from Chiusi, Italy, received the ring from a Jewish merchant around the year 1,000.

The ring had been passed down through the generations of a Jewish family and the Virgin Mary appeared to the Jewish merchant in a dream. He gave the ring to the goldsmith, but initially the goldsmith did not believe the story.

After witnessing a vision of his deceased child, the goldsmith donated the ring to a nearby convent. The ring was eventually stolen from Chiusi, but soon after recovered and then entrusted to a church in Perugia. Countless miracles and legends surround the ring, adding to its mysterious nature.

Separately, an 18th-century visionary known as Bl. Anne Catherine Emmerich seemed to confirm the ring’s authenticity in a vision she had of the ring.

I saw the Blessed Virgin’s wedding-ring; it is neither of silver nor of gold, nor of any other metal; it is dark in color and iridescent; it is not a thin narrow ring, but rather thick and at least a finger broad. I saw it smooth and yet as if covered with little regular triangles in which were letters. On the inside was a flat surface. The ring is engraved with something. I saw it kept behind many locks in a beautiful church. Devout people about to be married take their wedding-rings to touch it.

Interestingly enough, author Miska Michele Tosti wrote in his book Il Santo Anello: Leggenda, Storia, Arte, Devozione that “an investigation carried out in 1949-50 … suggested that the relic is actually a man’s signet ring from the 1st century AD.” At the same time, it’s difficult for historians to link that ring to the Virgin Mary and St. Joseph.

Regardless, the ring reminds us of the ring that did exist at the betrothal of the Virgin Mary and Joseph and points us to the holy and faithful marriage that these two saints had, providing a beautiful home for Jesus to be brought up in.