The group did not include Cardinal Gerhard Müller, who has said the practice is against God’s law

The permanent council of the German bishops’ conference has endorsed Communion for the remarried, in the same week as the Vatican’s doctrinal chief said the practice was against divine law.
In a new statement agreed by the council, which numbers 27 out of the 66 German bishops, they say that the remarried can receive Communion without resolving to live “as brother and sister”. They say this is possible through “Differentiated solutions which are appropriate to the individual case”. An accompanying statement says the solution will be found through “a decision-making process, accompanied by a priest”.
The permanent council does not include the Vatican’s doctrinal chief, Cardinal Gerhard Muller, who in a recent interview said that the practice was against divine law.
In Familiaris Consortio (1981), St John Paul II said the remarried could only receive Communion if they tried to live “in complete continence”. The same doctrine has been taught by Benedict XVI, reaffirming centuries of Church teaching.
The cardinal said that the teaching reaffirmed by St John Paul II in Familiaris Consortio was not just one pope’s teaching, but something which could not be changed by any bishop, pope, or even an angel.
He added that some bishops were diverging from Catholic doctrine, and so risked becoming “the blind leading the blind”.
The permanent council of German bishops proposed Communion for the remarried in 2014, saying that it was “ a test of the Church’s credibility”. Several German bishops distanced themselves from the 2014 statement.
At the subsequent Synod on the Family, bishops did not approve the proposal. But since the Pope’s document Amoris Laetitia, some bishops have suggested Communion for the remarried is now possible.
In his recent interview, Cardinal Müller said: “Amoris Laetitia must clearly be interpreted in the light of the whole doctrine of the Church,” adding: “it is not right that so many bishops are interpreting Amoris Laetitia according to their way of understanding the Pope’s teaching.” 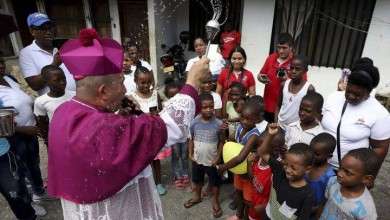 Colombian Bishop Uses Holy Water to ‘Drive Out the Devil’