Contents hide
1 MEDITATION OF THE DAY
1.1 “Behold, the virgin shall be with child”

“Behold, the virgin shall be with child”

We believe in his Son Jesus Christ, born of the Holy Spirit from the virgin Mary. Unbeliever, why do you become frightened at this nativity? Were he only a man who was born, do not believe it; but if it was God as man, he was born of her whom he chose, since he chose to be born…. What else makes you wonder? Because a Mother gave birth to her creator, because a creature created her maker? So it was: The Exalted chose to be born humble that he might disclose majesty through this very humility. The Mother, virginity intact, was carrying the Son, and she herself, whom the marital embrace had not enfolded, marveled…. But, unbeliever, listen to the prediction and understand the fulfillment. David, as prophet, says: A man will call her Mother of Sion, and a man was made in her, and the Most High himself founded her (Ps 87:5). The Most High, who founded her, was made man in her, the same Most High, because he created such a Mother, the same Most High, because he formed himself in her: he, in emerging from her womb, at the same time gave her a Son without taking away her virginity.

What is the grace of this Mother and Virgin? What is the grace of this woman, who, not knowing man, carries a Son? What is the grace? Listen to the angel Gabriel greeting her: Hail, full of grace, the Lord is with you. When the angel greeted this Virgin thus, then the Holy Spirit made her fruitful: this woman then conceived a man without a man, then was filled with grace, then received the Lord, so that he who had made her was in her…. The Virgin Mother recognized whom she carried, she knew; let astonishment flee and faith enter. Behold, the one whom she carried is born. He does not yet speak, but awakens the whole world. Heaven cries out, radiant with the light of a new star; earth, distressed by Herod, cries out; Magi, warned, come; Jews, troubled, inquire; everyone asks where is he who is everything: The maker of the world is sought throughout the world.

Saint Quodvultdeus († c. 450) was a bishop who suffered exile after the Vandals captured Carthage in 439. His name means “what God wills,” and is a Church Father. / © 2004 by Thomas Macy Finn. Published by the Newman Press, an imprint of Paulist Press, Inc. New York/ Mahwah, NJ. www.paulistpress.com. Used with permission. 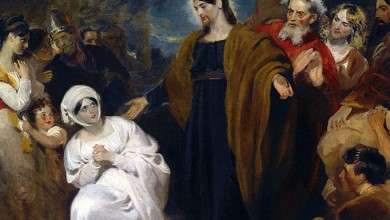 Does God really hear your prayers?

The Slippery Slope of Sexual Sin

Baby murderer encounters the Holy Virgin, who transforms him into a pro-life advocate