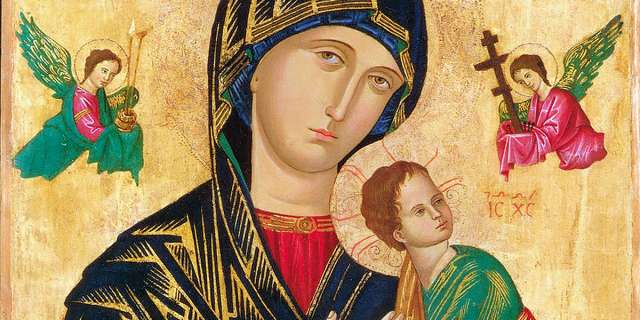 The meaning of the piercing of the Mother is this: that thoughts out of many hearts may be revealed. If the Mother did not suffer, then these thoughts would never be released from themselves…. Suffering as a simple human and yet raised up to the state of grace and in it participating in the Son’s sufferings, the Mother is understandable for everyone. And everything that lives in hearts as an unclear longing for God can, at the sight of the Mother’s suffering, take on form and become conscious and evident to the heart itself. Thus, through her suffering, she mediates hidden hearts to the Son; she opens them, because her own heart had been opened by the sword…. Even saints, whose sanctity and mission had been hidden from them until a certain point in time, grasped their mission when they saw the Mother suffer…. The Mother’s suffering is like a stairway up to the Cross, which before seemed inaccessible. In her it becomes evident that there really exists the Christian possibility of participation in the divine, redemptive suffering….

Countless people are first put on the Son’s path through the Mother’s example. And this path over Mary will be no detour for them but rather the simple approach, prepared and planned by God himself…. Again and again a worn-out, slackened faith in God—Father, Son, and Holy Spirit—a half-asleep readiness, will suddenly be struck and filled, like a sail by a sharp wind, by the thought of the Mother’s readiness for surrender. She could do it! She in fact did it! And she was human like me! Thus, through her wounds are the hearts of Christians revealed.