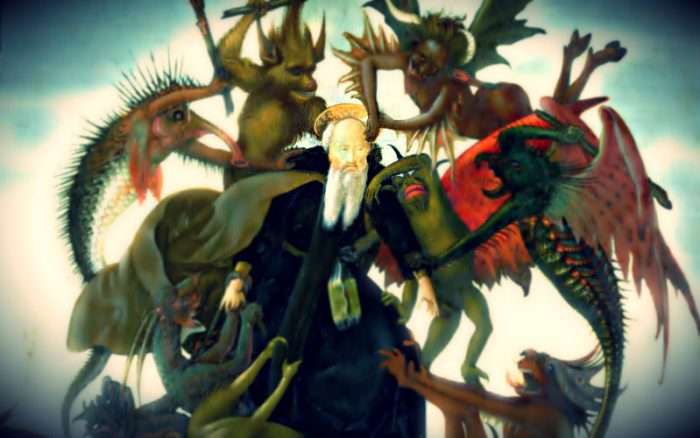 Catholic Home » Articles » Demons in the Desert: The Epic Spiritual Warfare of St. Anthony the Great

Most of what we know about St. Anthony the Great comes from a biography written by St. Athanasius (himself a great saint) called The Life of St. Anthony. In it, we learn about the epic spiritual battles that this 3rd-4th century monk was fighting out in the desert by himself – and what God himself had to say about them.

St. Athanasius writes that when people would visit St. Anthony at his desert home, “they heard tumults, many voices, and, as it were, the clash of arms. At night they saw the mountain become full of wild beasts, and him also fighting as though against visible beings, and praying against them.”

In one story, St. Anthony felt called to spend a night alone in a large tomb. Once he arrived, a huge group of demons descended upon him and attacked his body. The devil “so cut him with stripes that he lay on the ground speechless from the excessive pain. For he affirmed that the torture had been so excessive that no blows inflicted by man could ever have caused him such torment.”

The next day, a friend bringing him supplies found him and brought him back to a nearby village. But that evening, he regained consciousness and asked for the friend to carry him back to the tomb. After his friend shut him back in the tomb, St. Anthony called out, “Here am I, Antony; I flee not from your stripes, for even if you inflict more nothing shall separate me from the love of Christ.”

The demons returned, and here’s how St. Athanasius describes what happened next:

“[I]n the night they made such a din that the whole of that place seemed to be shaken by an earthquake, and the demons as if breaking the four walls of the dwelling seemed to enter through them, coming in the likeness of beasts and creeping things.

“And the place was on a sudden filled with the forms of lions, bears, leopards, bulls, serpents, asps, scorpions, and wolves, and each of them was moving according to his nature. The lion was roaring, wishing to attack, the bull seeming to toss with its horns, the serpent writhing but unable to approach, and the wolf as it rushed on was restrained; altogether the noises of the apparitions, with their angry ragings, were dreadful.”

Though he was in terrible pain, St. Anthony responded boldly to the demons:

“If there had been any power in you, it would have sufficed had one of you come, but since the Lord has made you weak, you attempt to terrify me by numbers: and a proof of your weakness is that you take the shapes of brute beasts.

“If you are able, and have received power against me, delay not to attack; but if you are unable, why trouble me in vain? For faith in our Lord is a seal and a wall of safety to us.”

Suddenly, the roof opened up and a bright light filled the tomb. The demons vanished and his pain ceased. Realizing that God had saved him, he prayed, “Where were you? Why did you not appear at the beginning to make my pains to cease?”

And God replied to him: “Antony, I was here, but I waited to see your fight; since you have endured, and have not been beaten, I will ever be a succor to you, and will make your name known everywhere.”

“Having heard this,” St. Athanasius writes, “Antony arose and prayed, and received such strength that he perceived that he had more power in his body than formerly. And he was then about thirty-five years old.”

St. Anthony’s spiritual battles continued the rest of his life, until he died at the age of 105.

St. Anthony the Great, please pray for us!