Prostrations, prayers rugs and fixed times of prayer are all traits of Christian devotion, though the prayers themselves are very different.

Islam was born in the 7th century in Saudi Arabia, and while the influence of Christianity on Islam is a topic of debate, it is striking to see the similarities between the prayer routines of some Christians and the prayer life of Muslims. The way these religious groups pray is similar in some points of style, while differing greatly in substance.

A Muslim believer is required to pray five times each day, stopping whatever they are doing to pray, often signaled by call to prayer (the adhan) from a nearby mosque. Muslims pray shortly before sunrise, at noon, in late afternoon, at sundown and before going to bed.

Historically, Jews prayed at fixed intervals throughout the day. King David, who is believed to have written the psalms, proclaims,

Christians adopted this type of prayer schedule and it was further solidified in monastic communities. By the 6th century, monks were praying seven times a day: during the night, at dawn, mid-morning, midday, mid-afternoon, at sundown and before retiring for bed.

The laity later joined the monks in prayer by praying the Angelus, stopping their work to pray at the sound of the nearby church bell.

Depending on the type of prayer, Muslims frequently kneel down and touch their heads on the ground in a type of prostration. It is repeated several times and a prayer rug is used to ensure a clean area. Additionally, if a man’s shoes are unclean they must also be removed.

Some Christians, especially in the Coptic tradition, frequently made use of prostrations during prayer. According to one historian, “The person … prostrates by kneeling down, and then moves the head down to touch the ground, while the knuckles and both thumbs touch the ground.” This is done “when one begins to pray … prostrating three times in the name of the Trinity; at the end of each Psalm … while saying the ‘Alleluia’; and multiple times during the more than forty Kyrie eleisons.”

This tradition has its source in the Gospels, where Jesus is recorded as praying in the Garden of Gethsemane: “And going a little farther he fell on his face and prayed, ‘My Father, if it be possible, let this cup pass from me; nevertheless, not as I will, but as thou wilt’” (Matthew 26:39).

Prayer rugs were also used in the Christian tradition to keep the person clean while performing prostrations. In some places the laity would bring a small piece of rug to the local abbot to get blessed, so that when they prayed at home, they would join in the prayers of the community. Additionally, it is an ancient tradition in the Coptic and Ethiopian Churches to pray without shoes, leaving them at the door of the church.

When Muslims pray they always take care to face the direction of the holy city of Mecca.

For 2,000 years Christians have prayed facing towards the Orient, the East. East is the direction of the sunrise and was naturally associated with various Christian imagery. East was first seen as a symbol of Christ, the “light of the world,” and the direction of his Second Coming. The sunrise was also associated with the Resurrection, as it is written in the Gospels that Christ rose from the dead at dawn. Christians for many centuries prayed facing east (ad orientem), both for the Eucharistic liturgy and at daily prayers.

Who is a Child of God?

Someone said addiction to a sin lessens culpability. Is this true?

How does the Last Supper relate to Passover? 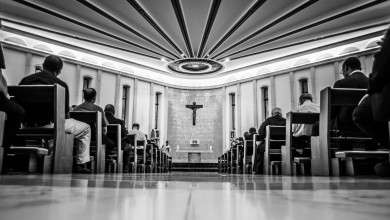 The Deal with the Eucharistic Fast 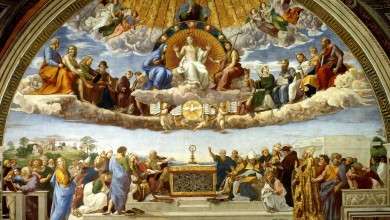 Will We See Our Family in Heaven?