The very first Marian apparition took place some few years after the death and resurrection of Jesus in the year 40.

In this case, the Blessed Virgin appeared to one of the apostles, named St. James the Great, brother of St. John, in Spain. And this apparition is known as Our Lady of the Pillar.

During the days of the early Christians, James had traveled to the pagan lands of the Roman province of Hispania, which is known as Spain today.

His evangelization processes encountered a big difficulty and we were told that the apostle had fallen into despondency.

On one faithful night, as James was praying by the banks of the Ebro River near the city which known today as Zaragoza. All of a sudden, a great light engulfed him. As James stared into the light, and what he saw was beyond description. Inside the light was the Virgin Mary, and she was surrounded by thousands of angels.

The Virgin Mary told James that he should persevere, as she assures him that ultimately his work for Jesus would have great results and many would turn to the Faith. She further asked that a church should be built on the place where she appeared and She left behind a pillar of jasper to mark the spot where she had been.

She also left a small statue of herself as she’s holding the infant Jesus in her arms. The statue was sitting on top of the jasper pillar.

As the Blessed Virgin was still alive and living in Jerusalem, this was prior to her assumption into heaven and her appearance to St. James was considered an act of bilocation.

Immediately this happened, James gathered some of his new followers and they started work on a chapel on the designated site. And the chapel became the first church ever dedicated to Mary and as it is today, after many renovations, is known as the Basilica of Our Lady of the Pillar. It is located in the same place Our Lady appeared some 2,000 years ago.

James participated actively in the dedication of the small church and after which he returned to Jerusalem.
Ironically, he became the first apostle to die for the faith. As in the year 44, Herod Agrippa beheaded James.

After the death of James, the statue and pillar left by Our Lady were taken to be protected by the people of Zaragoza.
The various miracles surrounding the relic can bear witness to its heavenly origin.

However, during the Spanish Civil War in 1936, the left-leaning Republicans got the shrine bombed, but the particular bombs that hit the church didn’t exploded.

Due to that, no one is allowed to touch the statue except for the four priests who were assigned to its care and newborn infants, who can be lifted up to touch the image of their heavenly Mom.

Even Popes from the earliest times have given attestation to the authenticity of Our lady’s appearance at the shrine. As Pope Calixtus III in 1456 encouraged people to make pilgrimages to Our Lady of the Pillar.

Even the miracle of the shrine’s foundation was acknowledged.
One of the most prominent miracle took place in the 17th century. Where a beggar named Miguel Pellicer from the town of Calanda was not able to work due his amputated leg. He prayed constantly at the shrine for the help of the Blessed and his leg was restored.
So over the centuries, many controversial stories arose in respect to the authenticity of this shrine.

But on August 7, 1723, the Sacred Congregation of Rites affirmed the originality. In the year 1730, Pope Clement XII gave room for the feast of Our Lady of Pillar to be celebrated throughout the Spanish empire.

And She was eventually declared the Patroness of the Hispanic World. The feast day of Our Lady of the Pillar is October 12.

One last thought. St. Josemaria Escriva, as a young seminarian, made daily visits to the shrine of Our Lady of the Pillar. He constantly prayed for guidance and eventually founded Opus Dei. And the members honor her feast day every year.

Our Lady of the Pillar, please pray for us.

How lack of reverence for the Eucharist puts people off Catholicism 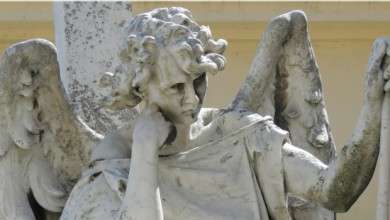 Why don’t our guardian angels spare us certain trials?