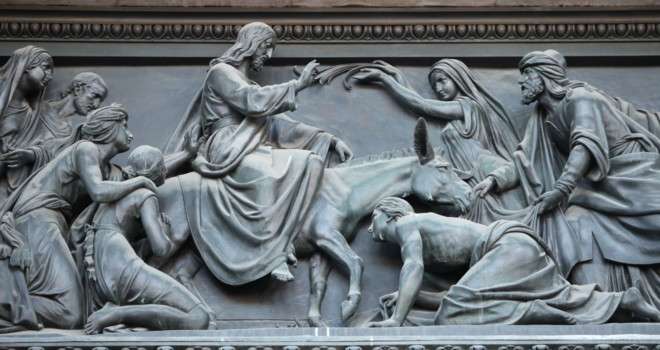 Catholic Home » Q&A » Do We Know That Jesus Existed?

For most people today, Christian and non-Christian alike, the existence of Jesus of Nazareth as a real, historical figure is almost axiomatic. People often debate what he was really like and what he really taught, and many non-Christians even admire him for his character and his moral teachings. What they usually do not do, however, is question whether Jesus ever existed at all. For most, that option is simply not on the table.

Nevertheless, there is a small but growing group of people who do in fact deny that Jesus was a real person. This opinion has gained a lot of steam from the rise of the internet and the easy access we now have to all sorts of knowledge and opinions, as anybody with a laptop and an internet connection can spread their points of view to countless others. In fact, I would even go so far as to say that from my experience, if you know anybody who’s anti-Christian or militantly atheistic, there is a good chance that they believe Jesus never existed.

Most deniers of Jesus’ existence defend their belief with three basic arguments: 1) We don’t possess sufficient non-Christian testimony to Jesus from the ancient world, 2) The earliest books of the New Testament don’t present him as a historical figure of the recent past, and 3) The stories about him in the Gospels are all reworked versions of stories that were already circulating in the first century.

In this article, I want to present a quick case for the existence of Jesus that tackles these three arguments head-on. Specifically, I am going to explain them in more detail and then turn the first two on their heads, showing how the evidence they appeal to actually contradicts their case. I’ll also show why the third argument doesn’t work, but there is nothing in it that we can turn into an argument for Jesus’ existence.

The first argument centers on the extant non-Christian testimony to Jesus. There are a few ancient authors who mention him, but the significance of their writings is disputed. For example, people who deny his existence often claim that these writers got their information about him from Christians, and they just accepted what they heard without questioning it.  As a result, they don’t provide any independent corroboration of Jesus’ existence.

Now, I don’t have the space in this article to delve into any individual authors or writings, but I do think we can turn this argument on its head. While we can debate the significance of various texts, what we know for sure is that nobody in the ancient world ever suggested that Jesus did not exist. Some ancient writers mentioned him and others ignored him, but none ever denied that he was a real, historical person. Even opponents of Christianity who argued against the faith (such as the philosopher Celsus) or ridiculed believers for their gullibility (such as the satirist Lucian of Samosata) accepted that he really existed.

Furthermore, the Church Fathers described all sorts of heresies and strange pseudo-Christian beliefs, but they never said that anyone denied the existence of Jesus as a historical figure. The closest we find is the belief that Jesus was a spirit who only appeared to be human (for example, Ignatius of Antioch describes this in his Letter to the Smyrnaeans 2:1), but that’s a far cry from denying that he ever existed at all. Simply put, if Jesus was a made-up figure, history has left us absolutely no trace of this. Nobody ever bothered to point out that Christianity was based on a man who never existed, so all memory of his invention was lost. That is incredibly unlikely, so even before we turn to the other two arguments, the scales are already tipping well in favor of Jesus’ existence.

The second argument looks at the New Testament epistles, most of which were written before the Gospels, and claims that they show no knowledge of an earthly, historical Jesus. For example, none of them mention Nazareth, Bethlehem, the names of his parents, or his debates with the Pharisees. Consequently, the epistles seem to present Jesus as a pre-existent divine being who came down to earth simply to die and rise again without having any sort of ministry or normal earthly life. As a result, proponents of this argument conclude that the earliest Christians believed Jesus to be a purely mythical figure, and his earthly life and ministry were invented later.

The main problem with this line of thinking is that the earliest epistles do in fact mention details about Jesus’ life. Sure, they don’t mention everything the Gospels tell us, but why would they? The Apostles wrote letters to instruct their congregations on matters of morality and Christian doctrine, not on the details of Jesus’ earthly life, so we should not expect them to mention things like where he grew up or who his parents were. Nevertheless, a few such details did find their way into the epistles. For example, St. Paul tells us that Jesus was Jewish (Galatians 4:4), that he was descended from King David (Romans 1:3), and that he had a brother (Galatians 1:19).

That last detail is particularly important. If St. Paul knew Jesus’ brother, then it’s just about impossible to deny that Jesus was a real, historical figure. Now, as Catholics, we believe that Mary remained a virgin throughout her life, so we need to explain this point a bit more. The Greek word for “brother” was often used to refer to other close relatives (for example, in the ancient Greek translation of the Old Testament, known as the Septuagint, Abraham’s nephew Lot is called his “brother” in Genesis 14:14, 16), and the Gospels imply that James was actually the son of another woman (if you compare Matthew 13:55 with Matthew 27:55-56, it seems that his mother was named Mary but was not the mother of Jesus). Consequently, we actually have good reason to say that James was Jesus’ close relative, not literally his brother, and that’s just as good. If Paul knew a close relative of his, then Jesus must have been a real person.

Finally, we reach the third and final argument against Jesus’ existence. This one compares the stories and sayings of Jesus in the Gospels to stories that were already circulating in the first century and posits that the Gospel writers simply copied those stories and reworked them to be about Jesus instead. For example, many say that Jesus’ miraculous multiplications of bread and fish to fed thousands of people (Mark 6:30-43, 8:1-10) are based on a similar miracle in the Old Testament performed by the prophet Elisha (2 Kings 4:42-44). They claim that the evangelist Mark simply saw the story about Elisha and made up similar ones about Jesus.

If you are not already convinced by the first two arguments against Jesus’ existence, this one by itself probably won’t do much to change that. The fact is that narrative similarities do not prove that one writer copied from another. Rather, the most likely explanation for the similarities between the Gospels and the Old Testament is that the evangelists, who believed that the Old Testament prophesied and foreshadowed Jesus’ life, death, and resurrection (for example, Matthew 1:22-23, Luke, 24:25-27), wrote their Gospels in a way that purposely highlighted those connections and showed exactly how the Old Testament points towards Jesus.

People also claim that the Gospel writers copied stories from pagan sources as well, but those claims suffer from similar problems. For one, as I said before, narrative similarities simply don’t prove anything. The mere fact that two stories are similar does not mean that one writer necessarily copied the other. Secondly, if we go through the entire corpus of extant literature from the ancient world, we should not be surprised if we find similarities to many things Jesus says and does in the Gospels. We possess so much ancient literature that we’re bound to come across numerous parallels to stories about anybody, not just Jesus. As a result, this third argument against Jesus’ existence does not work in any of its forms.

Where the Evidence Points

At the end of the day, the case against the existence of Jesus simply does not hold up. None of the arguments normally given are persuasive, and when we examine them closely, we can even turn some of them on their heads and show that the evidence they appeal to actually points in the opposite direction. As a result, we can be confident that Christianity is not based on a made-up figure. No, Jesus of Nazareth was in fact a real, historical person who lived and breathed in Israel 2,000 years ago.