The Catechism of the Catholic Church states that “rape deeply wounds the respect, freedom, and physical and moral integrity . . . that can mark the victim for life” (CCC 2356). And I have found at least nine women who were canonized because they chose death over rape. They are considered patronesses of purity. They are also considered patronesses of rape victims, which I find strange given they were not victims of rape. I can conclude only that our Church teaches that rape victims have lost their purity, that their respect and moral integrity are no longer the same because of the rape, and that death is preferable to rape.

The Catechism defines rape as “the forcible violation of the sexual intimacy of another person.” It does state that rape can wound the “moral integrity” of the victim. But integrity here means wholeness. Rape wounds a person’s wholeness. That does not mean that it makes the victim sinful; rather, it means that it can shatter the victim’s innocence. The Catechism then goes on to mention how evil such an act is. It then refers to the horror such a violation is to children. It does not suggest that such children—or any victims—are responsible in any way for what has happened to them or that they are morally corrupted by having been abused.
Some saints who have fended off attempted rapists, such as Maria Goretti, have been honored for their purity. This in no way implies that others who were unable to fend off their attackers were sinful. In either case, it is the perpetrator, not the victim, who has sinned. Morality lies in the act of the will.
The violation that rape victims experience often causes them to question themselves and even to feel guilty for this evil act that they did not initiate. Many, because of the violation, lose their sense of freedom because they live in fear that such an evil may befall them again.
Anyone who treats victims of rape with anything other than profound compassion and understanding is acting against the teachings of the Church and needs to be corrected. 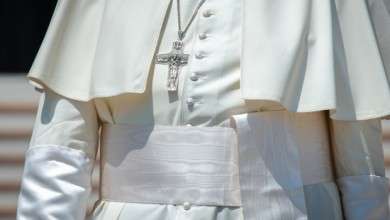 Why does Pope Francis wear a sash?

How do I arrange for confession & communion?

Can a Parish Priest Absolve the Sin of Adultery?