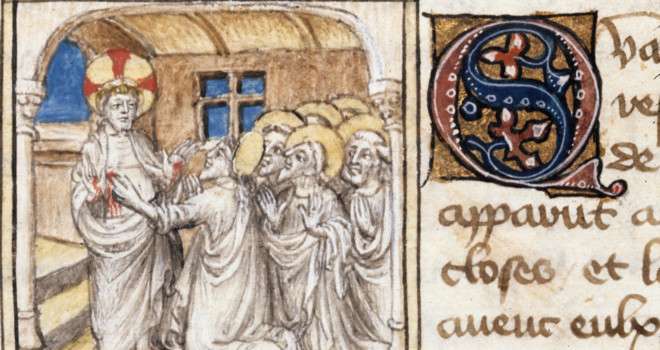 Doubting Thomas and the Divinity of Jesus

Catholic Home » Articles » Doubting Thomas and the Divinity of Jesus

A few years ago, I had the opportunity to discuss the divinity of Jesus with a couple of Jehovah’s Witnesses. They deny this doctrine and instead believe that Jesus is a created being, so our conversation gave me a chance to see how they deal with various Scripture passages that to me seem like clear proof that Jesus really is God. For example, I brought up this verse:

This text comes towards the end of John’s Gospel, in one of Jesus’ resurrection appearances to his disciples. After Jesus appeared to them and offered to show the wounds in his hands and side to prove that it really was him, the Apostle Thomas blurted out this seeming confession of Jesus’ divinity. To my mind, this text was conclusive, but my interlocutors had a clever way of explaining it. They argued that Thomas was simply expressing his amazement at seeing the risen Jesus, and his words “my Lord and my God” were just a cry of surprise, similar to how people today often say “oh my God” when they are surprised.

This is one of the most common ways that Jehovah’s Witnesses explain this verse, and it’s quite clever. While it may at first seem like they are just grasping at anything simply to avoid the plain meaning of the text, we can’t dismiss this argument quite so easily. As ludicrous as we may think it is, it is difficult to pinpoint exactly what is wrong with it. Why couldn’t these words have been just a cry of surprise? How do we know that they really were a confession of Jesus’ divinity?

I would suggest that there are two main problems with the way Jehovah’s Witnesses often explain this verse. For one, it’s based on the way people talk today, but it is completely foreign to first-century Judaism. In the first century, Jews were very careful about not using God’s name in vain. In fact, they were so careful that they sometimes didn’t even use the word “God,” opting instead to use circumlocutions like “the Blessed” (as in Mark 14:61), so there is no way that a first-century Jew like Thomas would have ever used the word “God” in such a careless way.

However, we have to be careful to get the argument right. Jehovah’s Witnesses can argue that since God’s name is actually Jehovah, not God, Jesus would have taught his disciples that using God’s name in vain meant using the name Jehovah in a careless way. As a result, Thomas would have had no qualms about using the word “God” this way. In response, we have to nuance our argument a bit. The point isn’t simply that Thomas would never have used the word so carelessly; rather, the real point is that he would never have even thought of using the phrase “my Lord and my God” as a mere exclamation of surprise.

To us today, this kind of exclamation may seem very natural, but that is only because we have been conditioned to think of it that way. We are so used to hearing people say “oh my God” when they are surprised that it just sounds normal to us. However, in the first century, Jews did not speak that way. There are no instances in ancient Jewish literature of this kind of careless use of the word “God,” and given what I explained above about the Jews’ reverence for the word, it is almost certainly because the Jews just never used it that way. As a result, Thomas didn’t live in a culture where the phrase “my God” was considered a normal exclamation of surprise, so it would not have even occurred to him to use it that way.

In other words, for Thomas, using the phrase “my Lord and my God” as a mere exclamation of surprise would’ve made about as much sense as someone today using the phrase “the earth is really big” in the same way. That is simply not something people say in our culture, so we would never think to say it ourselves. Similarly, first-century Jews did not use the phrase “my Lord and my God” as an exclamation of surprise, so Thomas never would have thought to use it that way either.

The second big problem with the way the Jehovah’s Witnesses try to explain this verse is that the text tells us that these words were addressed to Jesus. It doesn’t just say that Thomas said the words “My Lord and my God.” No, even though this point may be a bit obscured in some English translations, the original Greek of this verse explicitly says that Thomas addressed his words to Jesus.

This is important because when people say phrases like “oh my God,” they are not really directed towards anybody. When people express surprise in this way, they are not saying anything to anybody; they are just saying it to get their feelings out. It is like if someone stubs his toe on a table and screams, “Ouch!”  He’s not saying that to anybody; he’s not trying to tell anyone how much it hurt. No, he is simply crying out in pain, and the phrase “oh my God” is like that. When people say it (or any equivalent exclamation of surprise), they are not talking to anyone; they are not telling anyone how surprised they are. Rather, much like when people stub their toes, they are just crying out in surprise.

However, the text of the verse in question explicitly tells us that Thomas addressed these words to Jesus, so he couldn’t have been just crying out in surprise. As a result, even if Thomas could have conceivably used the phrase “my Lord and my God” as a cry of surprise on some other occasion, he did not do so here.

The Divinity of Jesus

At the end of the day, if we think about it carefully, the Jehovah’s Witnesses’ interpretation of this verse doesn’t hold up to scrutiny. For one, Thomas never would have used the words “my Lord and my God” as a mere cry of surprise. Secondly, even if he might have used the phrase this way on some other occasion, he did not do so this time. Rather, he addressed these words to Jesus as a confession of his divinity, and significantly, the text never tells us that this confession was mistaken. As a result, we have no choice but to conclude that Thomas was correct. Jesus really is God.