What should the posture of the laity be while the priest is cleaning the chalice, paten and ciborium? Sitting, standing or kneel

The congregation may sit or kneel during this time.
The Congregation for Divine Worship and the Discipline of the Sacraments addressed this on June 5, 2003 (Prot. N. 855/03/L):

Dubium: In many places, the faithful are accustomed to kneeling or sitting in personal prayer upon returning to their places after having individually received Holy Communion during Mass. Is it the intention of the Missale Romanum, editio typica tertia, to forbid this practice?
Responsum: Negative, et ad mensum [No, for this reason]. The mens [reasoning] is that the prescription of the Institutio Generalis Missalis Romani, no. 43, is intended, on the one hand, to ensure within broad limits a certain uniformity of posture within the congregation for the various parts of the celebration of Holy Mass, and on the other, to not regulate posture rigidly in such a way that those who wish to kneel or sit would no longer be free.

What to Do With Non-Consumed Hosts 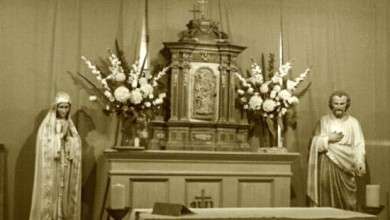 If a person doesn't fully pay attention during Mass and receives Communion, is it a mortal sin?

Has the Church ever banned the reading of the Bible by the faithful?