The Celtic cross has been recognized as an emblem of Irish Christianity for centuries.
Today, the symbol is visible from thousands of feet in the air, greeting passengers who fly into the City of Derry airport in County Londonderry, Ireland.
More than 300 feet long and 200 feet wide, the cross is set on a hill, made of thousands of lighter trees amidst a backdrop of darker trees in Ulster forest.
While the cross has been visible for several years, its origins remained a mystery, until recently when Irish TV station UTV uncovered the history of the wooded cross.
It was planted by the late forrester Liam Emmery, who passed away in 2010 at the age of 51 after suffering from poor health for a couple years.
The cross had remained mostly a mystery even to his family, until recently.
“Liam was in an accident and he was unwell for two years, and he had suffered brain damage. So that’s why I suppose I had forgotten about (the Celtic cross in the forest),” Liam’s wife, Norma Emmery, told UTV.
“Because if he was here, we’d all have heard about it because he would have been so proud.” A mysterious Celtic cross grew in an Irish forest (Twitter).

Gareth Austin, a horticultural expert, told UTV that the cross was a feat of horticultural engineering. The dry autumn has made the cross particularly visible this year.
“For Liam to have created that and to give the gift of that to the rest of us, we’re going to be appreciating this for the next 60 or 70 years,” Austin said.
The origins of the Celtic cross have been debated by historians for years. Some say the ring around the cross-section of the cross represents the halo of Christ, while others say it is a symbol adopted from pagan beliefs about the sun, to show Christ’s supremacy over the life-giving pagan solar deities. Many believe that either St. Patrick or St. Declan introduced the cross to Ireland.
Other historians believe it came about because of its structural advantages – the ring helps support the arms of the cross.
Regardless of its exact origins, the cross became a symbol for Irish Christianity over the decades, and experience renewed popularity with the Celtic Revival of the 19th and 20th centuries.
Norma said that it made sense that it was the symbol her husband chose to plant in the forest.
“He just loved things to be perfect, and I think the Celtic cross is perfect for him.” 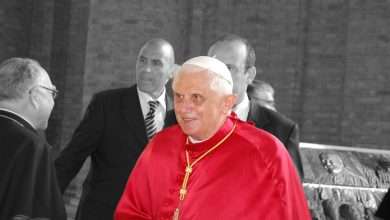 Benedict XVI has rested and his condition is stable, according to the Vatican.