Although many Protestant traditions baptize babies, Baptists—and “Bible churches” in the Baptist tradition—insist that baptism is only for those who have come to faith. Nowhere in the New Testament do they point out do we read of infants being baptized though we have early teachings by several church fathers on infant baptism.

On the other hand, nowhere do we read of children raised in believing households reaching the age of reason and then being baptized. The only explicit baptism accounts in the Bible involve converts from Judaism or paganism. For children of believers, there is no explicit mention of baptism—either in infancy or later.

Does this pose a problem for Baptists and Bible Christians? On what basis do they require children of believers to be baptized at all? Given the silence of the New Testament, why not assume Christian baptism is only for adult converts?

This, of course, would be contrary to historical Christian practice. But so is rejecting infant baptism. As we will see, there is no doubt that the early Church practiced infant baptism; and no Christian objections to this practice were ever voiced until the Reformation.

While it does not explicitly say when (or whether) believers should have their children baptized. The New Testament itself is not silent on the subject.

When Baptists speak of “bringing someone to Jesus,” they mean leading him to faith. But Jesus says “even infants” can be “brought” to him. Even Baptists don’t claim their practice of “dedicating” babies does this. The fact is, the Bible gives us no way of bringing anyone to Jesus apart from baptism.

Thus Peter declared, “Repent and be baptized, every one of you; in the name of Jesus Christ for the forgiveness of your sins; and you shall receive the gift of the Holy Spirit. For the promise is to you and your children” (Acts 2:38–39).

The apostolic Church baptized whole “households” (Acts 16:33; 1 Cor. 1:16), a term encompassing children and infants, and servants. While these texts do not specifically mention—nor exclude—infants, the very use of the word “households” indicates an understanding of the family as a unit. Even one believing parent in a household makes the children and even the unbelieving spouse “holy” (1 Cor. 7:14).

Does this mean unbelieving spouses should be baptized? Of course not. The kingdom of God is not theirs; they cannot be “brought to Christ” in their unbelief. But infants have no such impediment. The kingdom is theirs, Jesus says, and they should be brought to him, which means baptism.

upheld and regarded apostolic. The only reported controversy was a third-century debate on whether or not to delay baptism until the eighth day after birth, like its Old Testament equivalent, circumcision! (See quotation from Cyprian below; compare Leviticus 12:2–3.)

Consider, too, that Fathers raised in Christian homes (such as Irenaeus) would hardly have upheld infant baptism as apostolic if their baptisms had been deferred until the age of reason.

For example, infant baptism is assumed in Irenaeus’ writings below (since he affirms that regeneration happens in baptism and that Jesus came so even infants could be regenerated). Since he was born in a Christian home in Smyrna around the year 140, he was probably baptized around 140. He was also probably baptized by the bishop of Smyrna—Polycarp; a personal disciple of the apostle John, who had died only a few decades before.

“He [Jesus] came to save all through himself; all, I say, who through him are reborn in God: infants, and children, and youths, and old men. Therefore he passed through every age, becoming an infant for infants, sanctifying infants; a child for children, sanctifying those who are of that age . . . [so that] he might be the perfect teacher in all things, perfect not only in respect to the setting forth of truth, perfect also in respect to relative age” (Against Heresies 2:22:4 [A.D. 189]).

“‘And [Naaman] dipped himself . . . seven times in the Jordan’ [2 Kgs. 5:14]. It was not for nothing that Naaman of old when suffering from leprosy was purified upon baptism, but [this served] as an indication to us. For as we are lepers in sin, we are made clean, by means of the sacred water and the invocation of the Lord, from our old transgressions, being spiritually regenerated as newborn babes, even as the Lord has declared: ‘Except a man be born again through water and the Spirit, he shall not enter into the kingdom of heaven’ [John 3:5]” (Fragment34 [A.D. 190]).

“Baptize first the children, and if they can speak for themselves, let them do so. Otherwise, let their parents or other relatives speak for them” (The Apostolic Tradition 21:16 [A.D. 215]).

“The filth of wickedness and sin soils every soul that is born into the flesh. . . . In the Church, baptism is given for the remission of sins, and, according to the usage of the Church, baptism is given even to infants. If there were nothing in infants which required the remission of sins and nothing in them pertinent to forgiveness, the grace of baptism would seem superfluous” (Homilies on Leviticus 8:3 [A.D. 248]).

“The Church received the tradition of giving baptism even to infants from the apostles. The apostles, to whom were committed the secrets of the divine sacraments, knew there are in everyone innate strains of [original] sin, which must be washed away through water and the Spirit” (Commentaries on Romans 5:9 [A.D. 248]).

“As to what pertains to the case of infants: You [Fidus] said that they ought not to be baptized within the second or third day after their birth, that the old law of circumcision must be taken into consideration, and that you did not think that one should be baptized and sanctified within the eighth day after his birth. In our council, it seemed to us far otherwise. No one agreed to the course which you thought should be taken. Rather, we all judge that the mercy and grace of God ought to be denied to no man born” (Letters 64:2 [A.D. 253]).

“If in the case of the worst sinners and those who formerly sinned much against God, when afterward they believe; the remission of their sins is granted and no one is held back from baptism and grace, how much more, then, should an infant not be held back, who, having but recently been born, has done no sin, except that, born of the flesh according to Adam, he has contracted the contagion of that old death from his first being born. For this very reason does he [an infant] approach more easily to receive the remission of sins: because the sins forgiven him are not his own but those of another” (ibid., 64:5).

“Do you have an infant child? Allow sin no opportunity; rather, let the infant be sanctified from childhood. From his most tender age, let the Spirit consecrate him. Do you fear the seal [of baptism] because of the weakness of nature? Oh, what a pusillanimous mother and of how little faith!” (Oration on Holy Baptism 40:7 [A.D. 388]).

“‘Well enough,’ some will say, ‘for those who ask for baptism; but what do you have to say about those who are still children; and aware neither of loss nor of grace? Shall we baptize them too?’ Certainly [I respond], if there is any pressing danger. Better that they be sanctified unaware, than that they depart unsealed and uninitiated” (ibid., 40:28).

“You see how many are the benefits of baptism, and some think its heavenly grace consists only in the remission of sins, but we have enumerated ten honors [it bestows]! For this reason, we baptize even infants, though [personal] sins do not defile them, so that there may be given to them holiness, righteousness, adoption, inheritance, brotherhood with Christ, and that they may be his [Christ’s] members” (Baptismal Catecheses in Augustine, Against Julian 1:6:21 [A.D. 388]).

“What the universal Church holds, not as instituted [invented] by councils but as something always held, is most correctly believed to have been handed down by apostolic authority. Since others respond for children, so that the celebration of the sacrament may be complete for them, it is certainly availing to them for their consecration, because they are not able to respond” (On Baptism, Against the Donatists 4:24:31 [A.D. 400]).

“The custom of Mother Church in baptizing infants is certainly not to be scorned, nor is it to be regarded in any way as superfluous, nor is it to be believed that its tradition is anything except apostolic” (The Literal Interpretation of Genesis 10:23:39 [A.D. 408]).

“Cyprian was not issuing a new decree but was keeping to the most solid belief of the Church; to correct some who thought that infants ought not to be baptized before the eighth day after their birth. . . . He agreed with certain of his fellow bishops that a child can be duly baptized as soon as he is born” (Letters 166:8:23 [A.D. 412]).

“By this grace, baptized infants too are ingrafted into his [Christ’s] body, infants who certainly are not yet able to imitate anyone. Christ, in whom all are made alive . . . also gives the most hidden grace of his Spirit to believers; grace which he secretly infuses even into infants. . . . It is an excellent thing that the Punic [North African] Christians call baptism salvation and the sacrament of Christ’s Body nothing else than life.

Whence does this derive, except an ancient and, as I suppose, apostolic tradition; by which the churches of Christ hold inherently that without baptism and participation at the table of the Lord; it is impossible for any man to attain either to the kingdom of God or to salvation and life eternal? This is the witness of Scripture, too. . . . If anyone wonders why children born of the baptized should themselves be baptized, let him attend briefly to this. . . . The sacrament of baptism is most assuredly the sacrament of regeneration;” (Forgiveness and the Just Deserts of Sin, and the Baptism of Infants 1:9:10; 1:24:34; 2:27:43 [A.D. 412]).

“Item: It seemed good that whenever there were not found reliable witnesses who could testify that without any doubt they [abandoned children] were baptized and when the children themselves were not, on account of their tender age, able to answer concerning the giving of the sacraments to them, all such children should be baptized without scruple, lest hesitation should deprive them of the cleansing of the sacraments. This was urged by the [North African] legates, our brethren since they redeem many such [abandoned children] from the barbarians” (Canon 7 [A.D. 401]).

“[W]hoever says that infants fresh from their mothers’ wombs ought not to be baptized, or say that they are indeed baptized unto the remission of sins, but that they draw nothing of the original sin of Adam, which is expiated in the bath of regeneration . . . let him be anathema [excommunicated]. Since what the apostle [Paul] says, ‘Through one man sin entered into the world, and death through sin, and so passed to all men, in whom all have sinned’ [Rom. 5:12], must not be understood otherwise than the Catholic Church spread everywhere has always understood it. For on account of this rule of faith, even infants, who in themselves thus far have not been able to commit any sin, are therefore truly baptized unto the remission of sins, so that that which they have contracted from generation may be cleansed in them by regeneration” (Canon 3 [A.D. 416]). 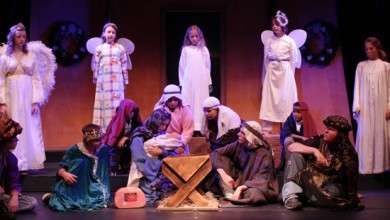 What the Herdmans teach us about the true meaning of Christmas 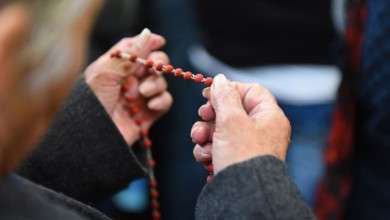 How to pray the Chaplet of the Precious Blood