Advertisement
In recent months, national debates over immigration and deportation have reached a fever pitch in the wake of President Trump’s election.
But for Archbishop Jose Gomez, both Catholic principles and the history of America as a home to people from a variety of backgrounds means that the immigration debate has higher stakes than just law enforcement or national sovereignty.
“For me, and for the Catholic Church in this country, immigration is about people. It is about families,” the archbishop said in a March 23 talk at the Catholic University of America.
“We are talking about souls, not statistics.”
Born in Monterrey, Mexico, the archbishop explained that he too was an immigrant, even though he has been an American citizen for more than 20 years. He pointed out that his family has been living in what is now Texas since the early 19th Century, and his family’s relationship to both America and immigration reaches back generations.
He also explained that his archdiocese – the Archdiocese of Los Angeles – is not only the largest, with around 5 million Catholics, but the most diverse.

Within the archdiocese, Mass is celebrated and parishioners ministered to in more than 40 languages, from nearly every country in Latin America, Asia, Africa and the Middle East.
“The Church is alive here – and active,” he said. “And we are really a Church of immigrants.”
Nearly one million of these immigrants who live within the Archdiocese of Los Angeles are undocumented.
Archbishop Gomez argued that this issue of large numbers of undocumented persons is something his adopted country desperately needs to address. This is incredibly important, he said, not only for immigrants and their families, but for America as a whole.
“Everybody right now knows that our immigration system is totally broken and needs to be fixed,” the archbishop said. However, while the United States has a right to secure its borders and enforce its laws, it also has to take responsibility for creating and benefiting from the situation that lead more than 11 million people to come to the country without documentation, he said.
“For many years our country did not enforce its immigration laws,” Archbishop Gomez said. “Why not? Because American businesses were demanding ‘cheap’ labor. So government officials looked the other way.”
The archbishop argued that “we need to recognize that we all share some of the blame for this broken immigration system.”
“Business is to blame. Government is to blame,” Archbishop Gomez said. “And you and I – we have responsibility, too. We ‘benefit’ and depend every day on an economy that is built on the backs of undocumented workers. It is just a fact. Immigrants grow our food, they serve us in our restaurants; they clean our rooms and our offices, they build our homes.”
He noted that while undocumented persons may be living here in violation of the law, “we aren’t putting business owners in jail or punishing government workers who didn’t do their job.”
“The only people we are punishing is the undocumented workers,” he charged. “They are the only ones.” While some punishment, such as community service or other requirements to stay in the United States may be appropriate, Archbishop Gomez commented, it is unfair to the families of nearly 11 million people to deport people with families – some of whom have been here for years.
“That is not fair. It is cruel, actually,” Archbishop Gomez said. “These are just ordinary moms and dads – just like your parents – who want to give their kids a better life.”
To balance love, laws, justice, and mercy, Catholics should consider principles that focus on the human person. The first principle, he said, is to recognize that “every immigrant is a human person, a child of God,” regardless of their legal status or background. The second Catholic principle to consider is that”immigration should keep families together.”
Archbishop Gomez pointed out that over a quarter of deportations break up families, and overwhelming majority of these deportations do not apply to violent criminals.

“I do not believe there is any public policy purpose that is served by taking away some little girl’s dad or some little boy’s mom. We are breaking up families and punishing kids for the mistakes of their parents. And that’s not right.”
While some common place policies could quickly resolve the issues surrounding immigration, Archbishop Gomez argued that the real conflict has more to do with ongoing questions about America – questions like what it means to be an American and what America’s mission is in the world.
The archbishop noted that almost all Americans are of immigrant heritage. “But immigration to this country has never been easy.” He pointed out that immigrant groups like the Irish have faced discrimination and hardship.
Yet, the history of America owes much to its immigrant – particularly Hispanic – roots, which long predate the arrival of English settlers, the archbishop said.
“For me – American history begins with Our Lady of Guadalupe,” Archbishop Gomez reflected. Before the founding fathers were born or before the Revolutionary War was fought, Spanish and Mexican missionaries and Philippine immigrants were settling in what is now the United States, celebrating the nation’s first Thanksgiving and establishing churches.”
“Something we should think about: the first non-indigenous language spoken in this country was not English. It was Spanish. We need to really think about what the means,” he said.
What it means, in his opinion, is that we “can no longer afford to tell a story of America that excludes the rich inheritance of Latinos and Asians.”
Conceptions of American identity that don’t incorporate the rich history of these groups, he said, are not only incomplete and inarticulate, they are not as well-set to adjust to the changing landscape of the United States. America is changing, and if America wants to be great, he argued, it needs to speak to the conscience and realities of the United States.
“That is what’s at stake in our immigration debate – the future of this beautiful American story,” Archbishop Gomez concluded. “Our national debate is really a great struggle for the American spirit and the American soul.” 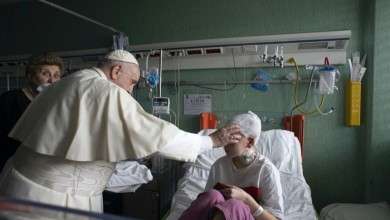 Vatican: ‘Ordination in China marred by presence of illegitimate bishop’

3 men got 80 lashes in Iran for taking Holy Communion. Read why.